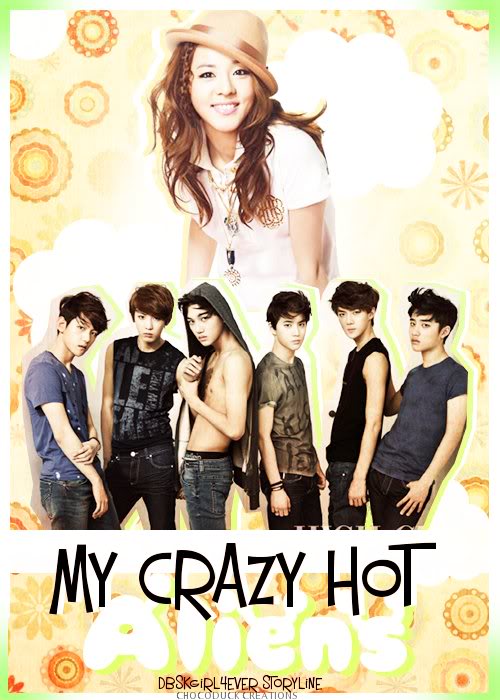 With the arrival of six aliens from Exoplanet, your life will never be the same.

I've watched their 'History' MV and I think it's sooo awesome and I've been inspired by it!

*Disclaimer: I know there are many stories of Exo out there, and maybe there are fics with them as aliens/robots but this CAME FROM MY OWN IMAGINATION. I DID NOT COPY ANYONE! YOU ALL KNOW I DESPISE ANY FORM OF PLAGIARIZING! So anything that seems similar is purely coincidential!

RESPECT ME AS AN AUTHOR AND DO NOT PLAGIARIZE IN ANY SHAPE OR FORM!

THAT MEANS NO COPYING, NO PRINTING, NO SAVING ONTO YOUR TECHNOLOGIES, NO REPOSTING, NO TRANSLATING INTO OTHER LANGUAGES, ETC!

PLAGIARIZING WILL NOT BE TOLERATED AND IMMEDIATE ACTION WILL BE TAKEN!

DON'T BE THAT ONE PERSON THAT RUINS IT FOR EVERYONE.

PLEASE DON'T GIVE ME THE DESIRE TO LOCK MY STORIES INTO PRIVATE FROM NOW ON!

-Personality: Not like other girls, funny, sarcastic, clumsy, witty, hard-working, trustworthy, responsible, AB bloodtype, bi-polar at times, loves adventure but also loves to stay home, honest. firm believer in standing up for what you believe in. loves ramen, loves food overall, not a fan of make-up, prefers old sneakers to fancy high heels. bad luck seems to be with you everywhere you go.

-Mother died when she was born, raised by father who was your role model but passed away when you were a freshman in high school. Father used to own PC room. Works part time as a waitress at bar/nightclub/karaoke room.

The six mysterious members of Exo-K:

Kai: mysterious, sarcastic alien that often gets under your skin

D.O.: Rash alien whose actions are first and loves to get into battles.

Chanyeol: The cute alien who always seems so serious but goes wild when he sees ramen.

Sehun: The maknae alien who is too tall to be a maknae but his cuteness makes up for it.

Ever since your father died, it just seems to get worse.

To name a few: you're bullied by your peers at school, you get harrassed at work, and you're the clumsiest person on the planet.

Can things get worse?

What about running into six (HOT) aliens who claim you're their "star"?

Exo-K, six aliens sent from the planet Exo, have come to Korea to learn more about earth and its people and gather information to take to their mother planet.

Especially information about flirting with the opposite gender.

And apparently, you need to be their tour guide.

Will you accept it? Do you even have a choice when you're outnumbered by dangerous, mysterious beings from another planet?

So what happens when an unlucky girl and six hot aliens cross paths?

"From now on, we're going to live with you."

"Then you can say goodbye to your existence on earth."

"...Welcome home! The bathroom is to your left and the bedrooms are upstairs!"

Belongs to DBSKGIRL4EVER 2012. All rights reserved.

No printing or redistribution allowed.

No form of copying or saving allowed. Do not translate.

Do not take ideas, dialogues, and others from my story! ESP without permission!

Please don't plagiarize and any ideas, dialogues, and others that has to do with my story need to be given permission by me and credited by you IF I allow it.

Any violations will be reported and immediate action will be taken!

Next Chapter →
Author's Thoughts
"MY CRAZY HOT ALIENS III" IS OUT! PLEASE GO CHECK IT OUT :)
Read More →
Back to Top ↑
No comments yet
Back to Top ↑
Foreword
>> Collapse chapters <<
Promoted - Advertise