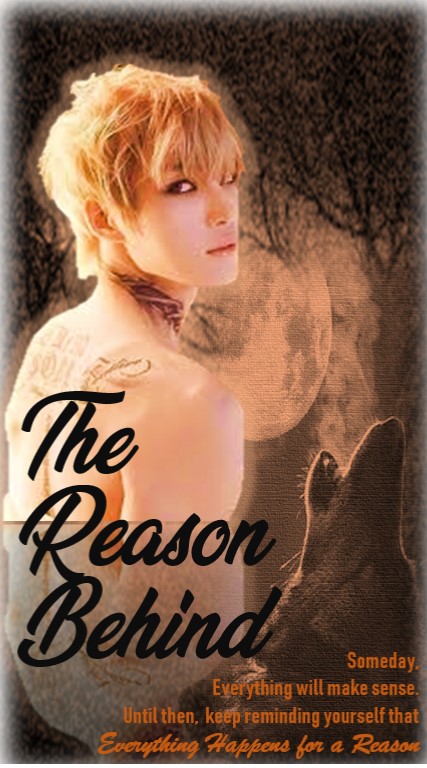 Legend has it that a white witch cursed the werewolf princess and her whole species when she killed the witch's lover, the youngest prince of Joseon. Centuries have passed and werewolves are unable to find true love.It is said that only once the witch reuintes with her lover will the curse be lifted.

Until one lunar ecllipse they did find the prince wandering in the streets of Los Angeles.

Everything complicates when the reincanated prince decides to write his own destiny instead.

"Please don’t say a word no more,
Let yourself fall asleep on my lap...
I'll take care you like i would my eyes
And you be the dream that unfolds in them....
Like feathers of a peacock my fingers will run ever so softly over you...
As if rehearsed the conversations shall flow.
Tears should never run free
And escape from my eyes
I've held back every teardrop
And my eyes have now become an ocean
Though I may have forgotten you
Not a day goes by where I don’t think of you.
Even if we part,
My love for you will never be a lie.

The days that never dawn,
The nights that never end,
Our drops of sweat that never dry....
With no moments of separation under the sheets
The clock that shows us the time,
Gives meaning to words that only we understand
The moments between the changing of clothes,
And we only ever realised once we were done....
The heart will never forget,
It will haunt me even after death
For you are the beginning and you are the end,
You are the epitome of happiness and you are the circumference of the whole world

Even if you drift away into the distance,
Even if that distance is the sky,
I will still be carrying you with me in the portals of my eyes...
You've already entwined in my soul and life
Your lips that part to bloom and beckon
Have endless letters inscribed on them
And even before I could respond or reckon
You evoporated like a dream, melting into me

Throw a stubborn tantrum
Lash out till you're spent
We lost our beautiful intricate design
From now, it's rain ever more"

This story has been lingering around my mind, with every chapter structured in my head for weeks. Now that one of my stories is coming to an end, I decided to start working on this too.

It's my first fantasy genre story so I'M BLOODY EXCITED!!!!!

And since today marks a lunar eclipse, why not upload the foreword  for my first fantasy fic right now?!!!!

I know I have been updating slowly lately, and this too will have slow updates, but, if you have read my other stories, I make sure to keep my readers interested.

Idol singer / actor / designer. Lead singer of the boy band JYJ. He is said to be the reincarnation of the Prince. Stubborn, stern yet friendly to with everyone he is comforable. Nicknamed "Troublemaker" by his werewolf protector.

Works part of team JYJ. She is the reincarnation of the White Witch. Protective of Jaejoong and would do anything to make him as hers.

A genius criminal mastermind working with the FBI. Somehow is connected to the happenings in the past but is unaware of how or why she is. Considers Jaejoong an idiot.

A human turned werewolf. Jaejoong's protector. She is convinced that Reya is the reincarnation of her mother. Has a time controlling Jaejoong.

Idol Singer / Actor part of the boyband EXO. Prides himself as the only man in Reya's life. Jaejoong hates him and he doesn't even know why.

Idol Singer / Actor. Reborn, and is part of the boyband TXVQ - Jaejoong's former bandmate. For some reason he finds Reya too familiar.

Idol Singer / Actor. Reborn, and is the leader of TXVQ. Something about Reya makes him want to know about her more.

Idol Singer / Actor / MC part of the boyband Super Junior. Is on a quest to find the girl he has been dreaming of.

Idol Singer / Actor. Maknae of JYJ. Loves Jaejoong as his own brother. Enjoys watching his hyungs bicker with each other.

Idol Singer / Actor part-time translator of JYJ. Is always targetted by Reya to annoy Jaejoong, and he doesn't mind it at all.

Peter is Reya's handler in the FBI while Elizabeth is his wife. They have been married for a long time but have no children. He cares about Reya but successfully hides it while Elizabeth tends to take care of her like her own child.

Sam and Dean Winchester (Derived from the TV Series - Supernatural)

Hunters who have history with Reya.

Cetain myths of the supernatural being might be tweaked to my preference. I will be trying hard to keep it to the myths but you know, I have played around a bit:

A mythological animal  according to some legends, are people who morph into vicious, powerful wolves while others are said to be a mutant combination of human and wolf. They are said to be blood thirsty beings who will kill and crave for blood though in reality are beings who wish to co-exist in harmony with the humans and have evolved to co-exist with humans in the current world.

Evil mythological beings who roam the world at night searching for people whose blood they feed upon. They, along with other supernatural creatures fight for superiority to rule the supernatural and eventually the human world. The werewolves are their only barrier to complete dominance.

Humans who hunts down the supernatural and saves people from monsters, demons, ghosts, wewolves and other creatures.

Someone who practices magic for the greatest good of all and with harm to none. They are often healers with a special connection to nature.

This is an Idol-OC story written in third person view.

None of the idols (and the characters I am adapting from other TV series) mentioned in here will not behave the same in real life. They are all part of my imagination.

I hope you will support me in this venture as you have been doing in my other stories!!!!

Poster credits goes to me, while the photos used are curtesy of Google Images

As I say in every foreword, I wish I could call Jaejoong as mine but I don't. I only own the storyline and the OCs. Please don't plagerize or translate this story without my consent.

And to whoever is interested, the link to the song is https://www.youtube.com/watch?v=rpIlP6pI8fo. Eventhough it is in Tamil, the song is AMAZING! And it's the PERFECT song for this fic!

And if you wanna see why and how, go ahead and click on the Next button below!

Next Chapter →
Author's Thoughts
I did not forget the story! Just had to focus on a HUGE exam