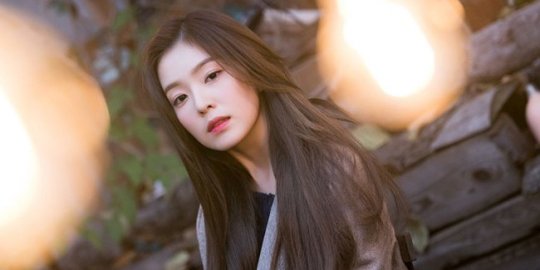 Week passed, it was time for them to continue the project of movie, the set that day was indoor, at a simple but vintage café in the middle of busy district in Seoul to be exact, but of course the whole team of production already booked the area around so they could use it personally and protect the artists too. A goddess-like actress wore a simple grey shirt and tied her hairs in lazily but still look tidy, she just changed her outfit and make up for the scene today, a casual black tote bag hung on her tiny shoulder freely too, the look honestly just very ordinary, like college girl ended up hang out with her friends after classes, but we talked about a Bae goddess Joohyun here, she is not just usual woman, she is the woman that very effortlessly to look extraordinary.

“Good morning everyone.” Joohyun bowed herself a little, her eyes slightly locked at someone whom sit alone casually in the corner, so focused on the paper she held and look so unbothered with the actress’ arrival, her eyebrows frowned a little and sometimes she her own lips just to make sure they were hydrated, none of second the actress missed the view displayed like a vitamin for her. A Kang Seulgi at work was just in different level in Joohyun’s eyes, she just looked so expert, untouchable, yet very alluring in the same time.

Joohyun didn’t let this go easily, she decided to walk closer to the Director, just to greet or make simple conversation since she missed her a lot, people still busy to begin, so she still had mins alone to spend with her Seulgi.

Seulgi tried to focus on her paper still, she noticed well Joohyun was walking closer earlier, but somehow kept building wall sounded better for her, the reason was still same, she wasn’t ready, just not yet.

Joohyun tried to call again since the Director didn’t bother to lift her head just to look at her. Seulgi sighed softly and closed her eyes, the paper she held looked so bored since Joohyun was stealing her attention perfectly.

“Tell me, Irene-sshi.” Seulgi said with serious but soft tone, it sent shiver in Joohyun’s skin but slightly excitement since finally their eyes met.

“Good morning.” Joohyun answered in soothing tone like Seulgi used to hear before, her heart slightly aching again, but she is Seulgi, someone that possible to be Director and actress in the same time, she was just too good to cover her emotion, but not really in front of Joohyun, since the tiny one woman knew her more than anyone.

“Morning.” Seulgi was lost in Joohyun smile but acted as chill as ever.

“Your shirt.” Seulgi stated so sudden.

“What is wr—"  Joohyun paused her words and widened her eyes as unexpectedly Seulgi’s hands tried to touch her chest, her legs felt like jellies and she was just be able to stand like a statue, she didn’t move at all but her heart was thumping crazily.

“This.” Seulgi touched the one of upper button of Joohyun’s shirt and buttoned it gently, turned out Joohyun was too excited to greet Seulgi and didn’t realise she ed too many her shirt and it exposed chest a bit. “Done.” Seulgi did the task perfectly.

“T-thank you.” Joohyun blushed badly, she never expected that simple action could make her heart mess in very good way, it was too intimate and made her sure that honestly they never broke up, they were still in bond.

Seulgi just blinked, she didn’t realise too why she did that far, but she felt the danger, that was the power of Joohyun’s smile, it could break her wall little by little and she couldn’t let herself fall over again.

A very loud and clear voice  broke their eye-lock, Seulgi felt grateful, she just afraid she would drown deeper in Joohyun’s murderous charm.

“I am here, Producer Lee.” Seulgi answered bit louder and she took a glance to Joohyun, she pulled her corner of lips again to Seulgi, she was smiling, but this time look so painful somehow, Seulgi felt guilty a bit, but she needed to ice herself, she thought this was the only way to protect her destroyed heart.

“I made veggies salad for you.” Sunmi said cheerfully and going to show her special box for the Director.

“She can’t eat vegetables.” Joohyun interrupted, it made both Seulgi and Sunmi shocked.

“Is that true, Director?”

Seulgi only nodded carefully, afraid to hurt Sunmi’s feeling, but accepted that and gave it to others sounded so wrong too.

Joohyun smiled widely and handed a pretty lunchbox on Seulgi’s table, since it was transparent box, they could see it contained prettily with various kind of fruits.

“Make sure you eat well.” Joohyun whispered on Seulgi’s ears, the Director just gulped nervously and earned a unbelievable look from Sunmi, she just witnessed something like really rare in her life, her Director and the actress are very close until she could figure out slowly the key owner of Seulgi’s heart, but she wasn’t sure either, maybe they were just like sisters, that was on Sunmi’s mind.

“You two are close?” Sunmi asked when Joohyun walked away already, she tried to make sure her conclusion.

“I will eat it.” Seulgi looked at Sunmi’s box, tried her best to not disappoint.

“No.” Sunmi answered briefly and walked closer to the Director. Seulgi even held her breath because the closeness. “It is not you that force yourself but it is me that need to learn you better.”

Sunmi watched how tight Seulgi held the box and smiled again in the end, “Sure.”

“Seulgi, are you not feeling well?” Seungwan touched Seulgi’s temple.

They were at office, just done their packed day, hours of taking shoot, directing, arranging and all. They did some review of today work and planned to go home after some checks.

“No no, it is warmer.” Seungwan denied instantly. “You are sick!”

“What are you talking about, I am alright.” Seulgi smiled.

“Yah! You look so pale too!” Seungwan started to worry, “You work too hard , think too hard”

Seulgi only tapped her own cheeks and checked her temple, “I will just drink paracetamol and case closed.”

“Lets go home.” Seungwan dragged Seulgi’s arm to get off her chair and ended the work.

“I will drive and make sure you eat well, drink medicine, and rest properly.”

“Mother or mother?” Seungwan teased, it brought Seulgi’s memory back.

“You are not superhero!” Joohyun sulked.

“I am superhuman.” Seulgi answered innocently.

Seulgi buried Joohyun in her bear embrace, warm and deep, never failed to make Joohyun feel safe and secured. Only Seulgi, yes only her could be able to tame the woman she held dearly.

“That’s why listen to me.” Joohyun muffled in Seulgi’s chest.

“Stop crying.” Seulgi caressed her hairs, “I don’t like being the reason of your tears.”

“Right, I don’t let others do that to you, but I did, I am sorry.” Seulgi held tighter.

“You are always forgiven.”

Seulgi smiled wide, “I am fine, only bit exhausted because overwork.”