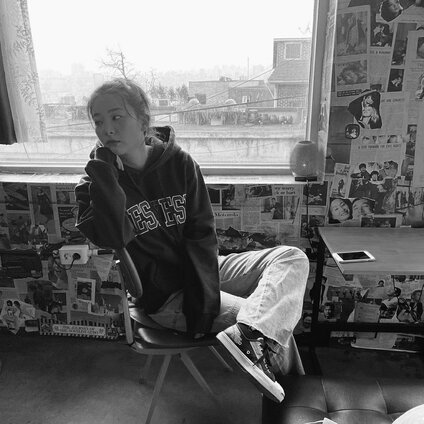 Joohyun called weakly with very low voice, she finally could talk a little after some moments, she had full check condition from doctor too as she was awake, they made sure every single thing was alright with Joohyun, and glad, there was nothing more serious happened with the woman after she got back her consciousness, she showed everyone that she was strong woman, it just waited the time she was fully recovered and she could go back home after that.

“Why why? Which part is hurt? You need something? You want me to call doc—”

Joohyun only shook her head slightly, tried to compose a sentence with her pale lips.

Seungwan body jolted a little, she gulped, her eyes changed, turned into sad ones. She couldn’t tell the true reason, just not yet, Joohyun still  her in recovery time, she couldn’t have much pressures on her head. Honestly the raven was the most innocent person between them, she didn’t know about the crazy deal and the sick woman behind it, better to keep it for now.

“Is she.. healthy?” Joohyun asked again, since Seungwan couldn’t answer her first question.

Yes, the last situation Joohyun knew and remembered was Seulgi had fever, she took care the monolid one with her best, tried to get the bear's heart again with full efforts. Seungwan kept blinking to hold her own tears badly, even in this kind of situation, in the lowest part of her life, Joohyun was still asking about her love’s condition, it made the brunette was bit difficult to answer.

‘The fever was gone since long time ago, Joohyun. She even could stay next to you whole day and night, talked to you, took care of you, guard you, securely on her hands. Even when the last time you were in your edge, she was the one beside you, witnessing her world fought for her own life infront of her eyes. She stood there, only for you.’

Seungwan wanted to shout those words loudly and clearly, but she just couldn’t, she didn’t want to hurt Joohyun more with those words when the reality was Seulgi wasn’t here and couldn’t be here.

“She is fine.” The brunette tried to form a smile as natural as possible, she knew well her best friend struggled badly there, but she still had no idea how to pull her from this situation, she would shut at least until Joohyun being completely fine again and ready to face this problem.

“Really?” Joohyun’s eyes brightened a little, it broke Seungwan more, since the thing she told was a lie.

‘No, she is really not fine at all.’ Another scream from Seungwan’s deepest heart.

“Don’t worry Joohyun, I will take care of that dumb bear.” Seungwan assured with full smile, tried to brightened the atmosphere, even though her head was full of Seulgi’s last words before she decided to disappear even in front of Seungwan.

‘Take care of her, Wan. Replace me for a awhile, maybe not now, but I promise, I will be back.’

Seungwan wasn’t sure when the monolid would back and what thing she would do, but she always having little faith on her both friends, she knew well, it just another storm, and no storm was permanent, every storm would be gone and passed.

Seungwan’s chest felt so much heavier, like out of sudden she got lack of oxygen supply there. Once again, her eyes tried to look as bright as possible and prevented its liquid to fall on her cheeks.

“What did you say? She is just.. busy.” Seungwan didn’t know how to make right excuse, she didn’t want to lie more to Joohyun yet she couldn’t hurt her too.

The brunette only inhled deeply, more than ‘coming’, her best friend was willing to give whole time and attention for her.

“Didn’t, right?” Joohyun stated, she knew well how bad she did hurt Seulgi before, and she didn’t hope much like Seulgi came to visit her, because that was kind of impossible.

Joohyun closed her eyes, desperately wanted her dream to appear again. In that world, she could hug her love, even touched the face, she could feel clearly the warmth on her hands, but it felt too real to be called a dream.

Joohyun only thought she just missed the woman a lot, when truth was the bear was really there, held her hands, gave the warmth, let the raven touched her face with the weak hand in her deep sleep. Those weren’t fake, because it was truly happened. That was why she could feel like every single thing in her dream clearly, like still so fresh.

Seungwan fixed Joohyun blanket and sent a simple smile, she lost count how many times Joohyun cried silently, it looked so full of pain, seeing someone cried without sounds somehow so painful for Seungwan, because that someone held so many emotions inside, bear and deal with it alone, without anybody knew.

The nurse noticed someone wore all black outfit outside Joohyun’s room through window, locked her eyes on her patient deeply, somehow it made her bit anxious, but she smiled a little as she could see someone behind that black cap slowly but surely, there was not anyone but Seulgi’s calm face.

It was late, Joohyun already drowned into her dreamland. Even the nurse walked very carefully to not waking the woman up, since the raven was such a light sleeper. She greeted Seulgi warmly with a bow as she was outside of the room already, the monolid just bowed back with a little smile on her face.

“It has been days but I haven’t seen you again since Joohyun-sshi was awake.”

Kang Seulgi, her eyes didn’t look same anymore, it wasn’t as warm as before, even her skin look pale, with whole dark outfit she wore, it showed clearly the real emotion inside herself, empty, cold, and lost. The bright and cheerful Seulgi that the nurse saw before was gone away, she could see how the monolid changed drastically even only in few days, even her smile looked so bitter but it was still genuine.

“Yeah, I have something to do.” Seulgi reasoned.

“You scared me for awhile, but this time you didn’t wear your mask.” The nurse stated truthfully.

Seulgi furrowed her eyebrows, got confused, “Mask? I never wear mask whenever I came here.”

“No way, you wore that days ago.” The nursed smiled wide, in disbelief tone.

“I didn’t, I swear.” Seulgi assured her.

“But there was someone with whole black outfit like this came this late too, she walked through here, I thought she was you.” The nurses shocked a little after knowing the fact.

“Yes, when she came out from the room I could see she was struggled to walk,” The nurse brought her memory of that day again, “..I even called your name several times that time, asked what was wrong with you because you looked walk in pain.”

“Struggled to walk?” Seulgi frowned again. But she tried her luck slowly but surely, “..can you figure by her walk, which part she was hurt?” She was curious to know the reason. Her heart was in race.

“I think her ankle, the right one.”