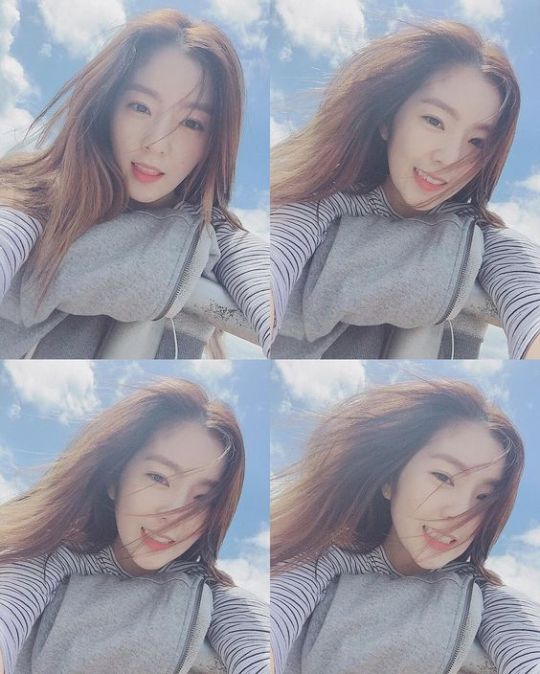 Seulgi tried to answer properly, but her heart was so aching, so heavy, so damaged. In the other side Joohyun couldn’t hold her tears anymore, those were falling freely on her cheek, she was longing the person she talked on her phone like so much.

Seulgi covered her own mouth with the back of her hand, she tried really hard to not showing any emotion in front of Joohyun, her eyes were teary, her shoulders were bit shaking, even Seungwan’s phone was almost fell.

“Stop.” Seulgi interrupted, like thunder for Joohyun, she missed when this voice only releasing sweet melodies on her ears, soothing her, lullabying her, serenading her.

“I said stop.” Seulgi composed her voice as stable as possible, but her tear was flowing but she wiped it immediately, she took a very deep breath, she knew well the woman in other line already cried, it shattered her heart more in pieces, she just couldn’t, it was her weakness.

“I..” Joohyun didn’t give up to talk with her love one.

Seulgi only closed her eyes, her mind said she needed to end the call like right in this second, but her heart couldn’t lie, she craved for this voice, even if this was just a dream, she didn’t wanna wake up.

Joohyun took a deep breath and released words, “I.. miss you.”

Seulgi smiled in the middle of her not so dry eyes anymore, her heart was really wounded, it suffocated her more knowing Joohyun’s feeling, because she was the one made the big hole in her heart, with that love.

“Why?” Joohyun knew she deserved this kind of Seulgi, but she wouldn’t ever get use to it, it was hurting her too, as much as Seulgi.

Seulgi answered in very low voice, “It will be easier for me to forget you.”

In the other side, a Bae Joohyun, formed a simple smile, it was hurtful but she found another small hope again. Yes, Seulgi was wounded and destroyed, but she finally she knew only herself in Seulgi’s head, that was enough for her to keep going on.

Cried this early was worth for Seulgi’s voice this morning, even though only few words, it made her heart warmer and she remembered well the time she decided to choose this path, she wouldn’t ever give up, it was just beginning, right?

She dried her wet cheeks and inhaled deeply.

“You wont ever forget me, Kang Seulgi.”

Seulgi’s clear and husky voice became a sign for the actress to start her scene, a Bae Joohyun ran beautifully in the middle of green field with flowers path, soft and gentle wind moved her hairs naturally, her bright and flawless skin were showing perfectly above the the blue sky, every single of her step was full of beauty, she was too dreamy, she was so heavenly.

The Director’s eyes was locking only to the actress in action, like every single second like a slow motion, every movement shook her heart and mind effortlessly. She was about to forget she was in work, but then she realized when Joohyun ran too long already, she only cursed to herself, Joohyun was never failed to hypnotize her, to paralyzed her.

Seungwan only giggled softly, she knew well this dumb bear was too drowning in Joohyun’s goddess charms, but well.. her best friend would deny it, as always.

“Water..” Seulgi whispered to herself.

Then the manager ran like a light to Joohyun to hand a mineral water to the panting actress because the running scene. Seungwan only smiled because she was finally understood what water Seulgi talked about, she was indeed a ready-steady partner for Joohyun, she would be the first one understood Joohyun’s need even without talking.

“You made her ran too long.”

“I followed the script.” Seulgi protected herself.

“Ah really Director Kang?” Seungwan mocked because she knew well the script wasn’t like that.

“Lets give her break for awhile.”

“I know you just.. care.” Seungwan teased, she knew Seulgi was bit guilty because tiring Joohyun.

“Because we have another scene to take, with the actor.” Again, Seulgi protected herself.

“But well, we can finish Joohyun’s first, so she can go straight home after that.”

Seulgi just shut , she didn’t know what to say and only blinked, she started to not understand what was inside her mind, it was mixing, she couldn’t see Joohyun’s more, but she wanted her to stay.

“You just wanna be with her longer right?” Another tease from the Assistant Director.

“Silly, let’s continue hers.” Seulgi couldn’t protect herself in front of Seungwan, that woman just knew her well even more than her parents.

“You changed your mind.”

Seulgi only shook her head while formed an unbeliavable smile.

In the other side, Joohyun had a glance to her Director, she talked playfully with her Assistant, Joohyun was very glad because they had Seungwan between them and simply being match-maker in their broken relationship.

Then she could see suddenly Seungwan made an ‘okay?’ sign for her as question, Joohyun understood that and nodded her head, she was okay to continue the next scene.

The Director’s voice sounded so melodic for the actress’ ears, the rabbit-like woman simply enjoyed the moment whenever Seulgi said that iconic word, it meant since that second Seulgi will only locked on her, from eyes, attention and her whole concetration, she loved when she was being the only in the monolid woman’s universe.

Joohyun walked slowly, she looked up the sky, focused on every details of her scene, she is awesome actress after all.

“I will fly high." She released the line of her movie, perfectly.

The next scene was she needed to closed her eyes, she had very good to build  and when it opened, it must be locked on the camera.

That was inside Joohyun’s head when she saw the camera in front of her, because she knew well, the love of her life was seeing her, she tried to send the message from her gaze.

‘You won’t ever forget me’

She spelled clearly like mantra in her head, she knew it would deliver well to the monolid woman. It was right, Seulgi just gasped but her eyes locked still on the screen, her world went blank for seconds and she couldn’t help more, she stood from her seat so sudden, walked straightly to the actress and everyone was.. watching her.

Joohyun’s heart was beating rushly, every single step Seulgi made like a countdown for her, she didn’t make mistake she thought, because the scene was only short line and her eye-locked to the camera, she did well, so what was the problem until the Director needed to get up from her seat?

“Y-yes?” Joohyun bit flustered because Seulgi was standing so close to her and she didn’t know what brought the bear-like woman stood in front of her.

“You.. you need to smile, not smirk.” Seulgi explained with stutter.

Joohyun relieved and could breath properly again. That was right, because she kept spelling the mantra on her