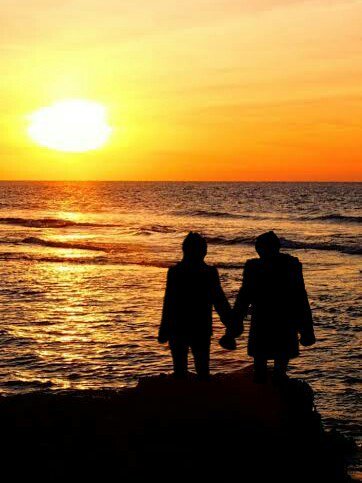 Seulgi - Do'nt Push Me (With Wendy)

Seulgi smiled in relief as she listened that was pretty normal for people like Joohyun’s condition to show their emotion by crying, somehow their minds was still working down there, just like living in their own world, the untouchable one. At least she was physically alright and still in stable state, but Seulgi thought whether happy or sad things, something must be happened with Joohyun down there, until made her shed the tears, it brought another concern for the taller one.

“What is wrong hmm? Is there hurt?” She asked Joohyun that back to her calm condition again. “..open your eyes and tell me which part is hurt okay? Don’t cry alone like that and make me worry.”

Seulgi sat on her chair again, she lowered her head and shut her eyes, still grabbing Joohyun’s powerless hand which fit perfectly with hers like puzzles. Few seconds later the soft sobs slowly but surely could be heard from the monolid one, it filled the air and broke the silence.

She didn’t wipe the tears and made the raven’s bedsheet wet a little by it.

“If that time I could understand you better would the story be different? If that time I accepted you in my life again, would we still be together until this time?”

Seulgi poured her true feeling, had another deep talk with her love one.

“You know.. you didn’t even have time to try your dress when they were done making it, you were so busy, Hyun.” She smiled bitterly, “..you had no idea how bad I want to see you wear that dress right? With my own eyes, witnessing my bride walked in.. the aisle.” She couldn’t finish her sentence properly since her chest felt so pressed by the pain.

“You had no idea.. how.. I really wait the time your father gave your hand to me, trusting his world in my arms.” She smiled again between her tears, the honest was she dreamt about it a lot in her sleep.

“You had no idea..” Seulgi paused a little and closed her eyes tightly, “.. until this second.. I still save that dress, your beautiful wedding dress. Because even in future, I just can’t figure someone else wears it in my head.”

“What should I face the world later without you in it? When every single side of this world always remind me of you.”

She formed another bitter smile.

Seulgi lifted up her head slowly, wiping her own tears and inhaled deeply, she stayed for seconds to compose her breath, trying to form another sentence in calm way.

“Promise me, later.. when you don’t find me when you open your eyes, just don’t cry, I don’t like being the reason of your tears.” She forced a smile.

“Maybe not in this life, we can be together. But, in the next life, I will make sure to find and fall in love with you again.” Seulgi faced Joohyun deeply, she just wanted to say the three magical words but she couldn’t, she was afraid it would hurt Joohyun more when she was awake later.

“Let’s enjoy rest of the time we have together, if I am truly yours, even world tell us to walk separately, I will be back to your embrace.” She trusted the power of their love, she had faith on it.

Yes, Seulgi still had a small hope for their relationship, just like a little miracle which could change everything just in a blink. But she is just human, with many limits, she couldn’t even turn back the time and re-write the faith.

“I will wash my face for awhile, Hyun. Look, my eyes are so swollen,” Seulgi pouted cutely, “..I will be back soon, okay?”

Then she got up from her seat, she stretch her muscles a little, since she sat for God knows how long for the other woman. She stared at Joohyun for awhile then finally stepped out from the room.

It was late already, even the morning almost came, but there was someone entered Joohyun’s room silently, judging from the clothes, that someone wasn’t doctor nor nurse in that hospital, and obviously not Seulgi, since she wore blue hoodie and still went to toilet to wash her puffy face.

That someone wore all in black, from her head to toe, even too difficult to figure out the person since there was a dark cap on the head and mask to cover half of the face. It seemed like the distance shortened since that someone walked closer and closer to Joohyun’s weak body in her very deep sleep.

A clear woman voice echoing through the silence.

“When you will be awake?” She whispered coldly in the air, glanced a little, “..I can’t wait longer.”

Then she stared at Joohyun straightly by her dark eyes.

“How it feels to be loved by her?”

“How it feels to be owned by her?”

“How it feels to be secured by her?”

The slight anger could be heard from the tone she used, her breath got heavy and quickened, but she tried to compose it well, since she still had many things to talk to the other woman.

“Answer me, Bae Joohyun.” She emphasized the name. She stood really close to Joohyun this time, even her body touched the side of Joohyun’s bed.

She smirked a bit and distanced her face again from Joohyun, but she didn’t move her feet even an inch.

She paused for awhile, caught another long breath.

“You have everything in this world, that is totally fine.” She nodded a little.

“But, I can’t let you have this one, just not anymore,” Another cold smirk plastered, “..now, she is mine.”

She chuckled herself, not loud one but clear enough to show how happy she was with her words.

“I really can’t share her more to you, staying here for hours, staring at you deeply, even hold your han