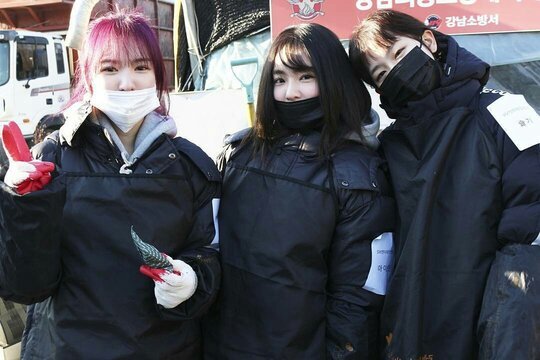 The woman named Lee Sunmi took a full deep breath, she closed her eyes tightly because couldn’t see the scene of Seulgi showered Joohyun with love anymore. The way she stared at her warmly, the way she talked softly, the way she held the smaller hand gently. That was right, home is not always house, sometimes it is a person.

And Seulgi, she was home.

“How?” Seungwan still looked at them with little smile.

“Just until she is awake.” Sunmi finally answered.

“Really?” She turned her head to Sunmi, the other woman honestly just showing her uneasy face, because she wasn’t really sure anymore about owning Seulgi, turned out Seungwan succeed to shake her state, but not fully yet, she still had a small hope, probably a plan?

“Eventhough you make thousands actions and countless efforts, if she is not written for you, then she won’t ever be yours.” Seungwan explained.

“W-what if.. what if.. she will never wake again? Or should I make her?” Sunmi said hesitately.

The woman’s crazy obsession was testing Seungwan’s patient, she was gritting her teeth, hearing those kind of words to Joohyun was really inappropriate and obviously sounded sick, Joohyun still fighting for her life there, and everyone believed she would open her eyes again. But here was Seungwan, try to manage her temper well to face someone like Sunmi, she really needed to know well which spots she should hit.

“Seulgi that you know is someone warm, she is innocent and she looks stupid sometimes. She even accepted the crazy deal of yours and let herself looked like a doll to do things you asked.  But listen this properly, because I will only say once.” Seungwan said in stern tone.

“Don’t-ever-touch-Joohyun, even an inch, just don’t.” Seungwan told with her clear voice.

“Because a Kang Seulgi.. will not think twice to sell her soul to the devil just to end your life.” Her stare to Sunmi got darkened.

“And you know who I am to Seulgi?” She paused talking for seconds but made her body got closer to Sunmi. Placed her lips closer to other woman’s right ear.

“Even if she kills someone.. I will help her to hide the corpse.” Seungwan whispered to Sunmi with a smirk, the other woman gasped and shivered, she threw her face away.

“Ehm.” Sunmi cleared and exhaled deeply, “I will go home, I feel bit dizzy after losing some of my bloods.” She reasoned so sudden.

Seungwan switched her face to the usual in second, the warm and bright one, but not looked same anymore in front of Sunmi, since she heard those shivering words uttered earlier from Seungwan’s mouth smoothly.

“Oh sure, you need much rest, make sure to eat well too.” Seungwan showed her bright smile, ofcourse not genuine one, but not looked forcefully.

“Thanks.” Sunmi turned her body to walk away from Seungwan, but suddenly the brunette stopped her by calling her name.

Sunmi looked back at Seungwan again, she only frowned, but the other woman still smiling, eventhough just little, but this was genuine one.

“Thank you for saving Joohyun.” She bowed a bit for seconds.

She respected Sunmi no matter how insane the latter woman was. She couldn’t deny, she made Joohyun’s condition got stable and brought Seulgi’s happiness back slowly, but Seungwan knew Sunmi wouldn’t stop this easy too, so she needed to give more ‘lessons’ later.

“I will get the thing that I suppose to get.” She reffered that thing was Seulgi. Her determination was bigger than before, everyone could see it clearly by her eyes.

But, Seungwan responded calmly, even chuckled a bit.

Seulgi came to Seungwan with bit puffy eyes, she cried much inside, poured her hidden feeling after long time, the feeling which she tried to bury and deny but honestly it was never leave.

“How was it?” The brunette asked warmly as she saw the monolid woman left Joohyun’s room.

Seulgi just nodded and smiled a bit, but she still had another ‘homework’ in her head, it made he face changed, and Seungwan noticed it.

Seulgi sounded so doubtful to explain her deal with Sunmi to her best friend, she was sure Seungwan would shout at her as usual when she did stupid things or something clumsy. Or probably the opposite? Seungwan would completely quiet and didn’t say a word, it happened when she was really disappointed.

She gulped, her mind was so crowded, like the worst part she would lose both Joohyun and Seungwan in her life, what a perfect day to make her own funeral, that was all Seulgi could think.

“Crazy deal?” Seungwan uttered, she was such a mind-reader, that stupid thought of Seulgi again.

Those monolid eyes got widened a bit in shock.

Seungwan closed her eyes tightly so sudden, she didn’t move for awhile and acted like a statue. The bear one surprised as the brunette made weird gestures with her hands, it kept moving in the air for seconds, Seulgi's eyes followed the movement even, but in the end she looked like she caught something with her palm, the other woman just locked her eyes and observed still.

“This called magic.” Seungwan said proudly and giggled her eyebrows s she opened her eyes.

Seulgi got freeze for seconds, blinked and nodded.

“Cool.” hung open a bit and nodded surely as agreement, she even softly clapped her hands to make celebration for Seungwan’s awesome skill.

“Yes yes, thank you.” The brunette only bowed a little like she was in stage and just did an incredible perfromance.

“Ugh..” The brunette acted like she was hurt by Seulgi’s very small hit. But She chuckled softly afte