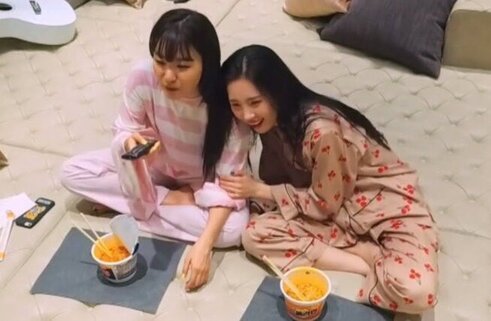 It has been a week, exactly a week after Joohyun jumped out from her beautiful dream and back to her cold world again, she just nodded with a light smile to the short hair woman, at least she was glad, she still had a very good friend like Seungwan, her presence meant a lot for the raven too, gave strength and never failed to bring positive vibes, moreover with her loud and clear voice, sometimes made Joohyun stretched her lips to form a simple smile.

“Are you ready for thisssss?” Stated the brunette with full excitement.

Joohyun nodded as reply, and once again she formed a smile but this one was wider, it because she witnessed how excited Seungwan and her parents’ happy face. Joohyun’s condition was so much better than before, she talked better too even though still not that much, she could do simple tasks like eating, changing clothes and went to bathroom by herself, even though a little help from others with movements since her muscles still adapting after her long sleep and the accident. But still that was very big and good progress from the raven.

“Finally you can go home, Joohyun.” The middle-aged woman said with holding her happiness to explode.

“Yes, Eomma.” Joohyun felt relieved either seeing how people around her happy because she recovered slowly and surely.

But somehow, there was a wide space in her heart, it felt so empty, so heavy, until somehow made her difficult just to catch a breath, she missed her woman to death, she just wanted to see her, just to make sure she was fine, she was healthy, she could smile, even for a while.

“Joohyun?” Seungwan noticed how the raven’s head slightly moving and her eyes scanned around, hoping a someone appeared from the door, she craved for someone that Seungwan didn’t even need to mention the name.

“She doesn’t come.” Joohyun answered with squeezed heart. Her parents looked at each other, she didn’t know why either why the monolid just disappeared, but they could understand it, Seungwan said all they could do just trusted Seulgi, no matter what, because she said she would be back.

“Joohyun, move your body slowly okay?” The brunette said again softly, she brought the wheelchair nearby to the bed, Joohyun could walk but not too much, she needed to keep her good progress by extra care like this.

Joohyun’s mother supported the woman’s body by her arm slowly, she did put Joohyun’s body on the seat very carefully, afraid that the raven would get any hurt by the movements, but honestly she was so much better just like doctor said, she could go home and only would do some regular check up few times until she was fully recovered and having normal activities again.

“Eomma, I am fine already.” Joohyun smiled seeing how her mother overly worried to her, but that was pretty normal as parent.

“Not fully yet.” Her mother answered.

“Okay I will go first to prepare the car okay?” Mr. Bae said to the three women.

“Let me do it, Joohyun’s Eomma.” Seungwan said immediately as the middle-aged woman was going to grab the handle of Joohyun’s wheelchair.

They just exchanged smile and finally ready to leave the room.

“Joohyun, aren’t you happy to go home?” Seungwan said as they passed through the corridor.

Home, the only home in Joohyun’s head was a warm and nice place she shared with a woman, no other place but their dream house. Not to mention the view of white sands, its clear blue sky and the way sunkissed her skin in very good way.

She just couldn’t forget that most beautiful dream in her life, she wouldn’t ever forget it to be exact. It was a chill and cozy place, a little space in this world that only contained by two of them, no others, no crowds, no disturbs, just her and the world she used to call it.. Seulgi.

“I am happy.” Joohyun plastered a light smile, with her eyes locking at her own feet that rest on the base of the wheelchair. Of course she was happy, because her mind stuck in the memories of being called a wife by someone for very first time in her life.

But suddenly, Joohyun’s daydream instantly broke by the crowds near to her, she even jolted her body a little since she was so easy to get startled, she scanned her place around carefully, turned out they were in the lobby of hospital already, no wonder there were some crowds around her, the one surprised Joohyun the most was the crowd of kids who played with someone with animal costume, big, brown and furry, a bear, exactly grizzly one.

“Woah they are so loud like me.” Seungwan commented.

Joohyun locked her eyes on the bear, even made her forgot to blink, she loved the figure, not because she was a kid like them, it just the figure reminded her of someone a lot, moreover the funny and weird dance in those cute round shaped cheeks, she couldn’t help but smile at it a little.

But Joohyun was lucky, the bear somehow noticed it, who wouldn’t? if a goddess-like woman had eyelock on you like you were her life, with soft gaze and even without blink, it would feel so magnetic. Moreover Joohyun was somehow always shining even in the middle of the crowds.

“Oh, that bear is going to come here? Did we look like a kid?” Another silly comment from the brunette.

The bear stood right in front of Joohyun this moment, Joohyun lifted hear head up a little, since she was in lower level because of sitting on the wheelchair. Seconds passed, the bear just frozen in her place, didn’t even move her round and big head anymore, simply mesmerized by Joohyun’s beauty.

The raven got another surprise this morning, the bear revealed something from the back and showed it right in front of Joohyun’s face, the woman only blinking rapidly as she saw it, she was surprised but somehow in good way, she liked it, even her nose recognized the nice smell which obviously from the thing that the bear presented to her.

Bae Joohyun, she received flowers, a small bucket of fresh flowers wrapped prettily from that furry big hand of the sweet bears, the cuter thing was the bear waited the raven to grab it patiently.

“F-for me?” Joohyun made sure, not realized how wide the smile she made.

The bear just nodded and finally Joohyun accepted the flowers shyly. Seungwan only smiled seeing the nice view in front of he