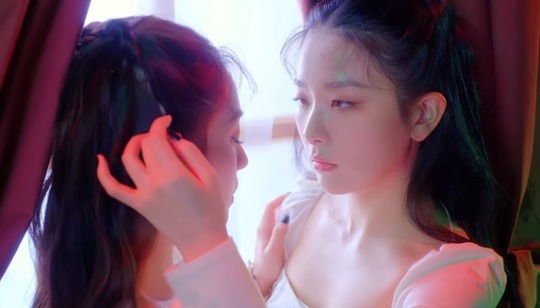 “Seulgi, are you seriously not drunk?” Seungwan surprised with her round eyes.

“Do I look like one now?” Seulgi said smoothly even with chuckled.

“I am sorry, I am really sorry for punching you.” The brunette said with full guilty tone, she had full concern on Seulgi’s light purple cheek and little wound on her lips.

“Hey it isn’t new for us, in past we ever fought and got bruises since we were stupidly acted like we were characters of tekken.” The monolids laughed this time, somehow she didn’t feel the pain on her cheek and lips anymore, just not really, it was fading by the bunch of joy she had, moreover since she had the evidence in her pocket.

“Wan, trust me, it would be weird if you didn’t hit me since I acted like jerk. When you punched me it doesn’t mean you hate me, It just.. how you show your love in different way, that’s how our friendship work.” Seulgi assured with smile.

“I just lost my mind when I saw you drunk, helplessly had someone crazy in your lap and you even called her Joohyun. I still can’t believe I fell on your secret plan too!” Seungwan landed herself on the couch’s space next to Seulgi, cutely hold her own head in frustrate.

“Should I end my director career and start to be an actress?” Seulgi giggled.

“You will be surely got an actress of the year award.” Seungwan teased, “.. oh I am curious what evidence you talked about?”

“Remember the night when Joohyun was on her edge when I left her for awhile to wash my face?”

Seungwan nodded, listened carefully. Of course she remembered that day.

“Turned out, it was a part of Lee Sunmi’s dirty action.”

“Huh? Lee Sunmi?” The brunette expected already, but she was curious still.

“She came secretly when I was away.” Seulgi’s eyes turned to dark again, she hated to know that the witch touched her woman this late, even she was the one who brought Lee Sunmi to heal her wound.

“What did she do?” Seungwan eagerly asked.

“She shook Joohyun’s body, several times.” Seulgi clinched her hands tightly, “..  I checked the cctv soon when I got the informations from the nurse that someone came before.”

“But it wasn’t clear since she wore cap and black mask to cover half of her face. She didn’t use her car but taxi that night, so I don’t get the license plate either. The evidence wasn’t strong.”

“You should tell me before so I could help you.” The short haired woman stated.

The monolid’s determination to reveal Sunmi’s sin was really huge, only by her own hand she could feel satisfied, she even acted very well as a jerk and let her body got touched there and there by the witch, at least she could hold it, but indeed difficult to stay clean when she needed to remove something dirty.

“Remember again when she asked me to bring her to doctor when her ankle was hurt?”

Seulgi took her phone from her jeans’ pocket then opened a file from recorder.

‘I got this when I visited Bae Joohyun that night, all I did was only asking her to wake up, but she was so weak and seemed like I disturbed her sleep, so I came out in rush and didn’t notice that my feet stuck in the door, then I fell.’

Seulgi closed her eyes, she really wanted to end Lee Sunmi’s life since she touched her love and played with her life so much. But no, that wasn’t a good decision, she would be the one got prisoned and being far away with Joohyun again. Death sounded too easy and quick for the sick woman, slowly, she needed to harvest what she planted first.

“Woah, that woman is thinner my patience.” Seungwan cracked her fingers like she was ready to beat that woman.

“I even asked her medical records to doctor for additional evidence since her wound is fully recovered now. They gave me since she came with me last time.”

“You did a good job, gomdori.” Seungwan praised sincerely while patting the bear’s head lightly. She didn’t expect her slow friend could do this far for sake of her love of life.

“I feel so guilty to Joohyun, Wan.” Seulgi’s jaw tightened, held her mixed emotions. “.. I am the one who brought that witch to doctor and even helped her to recover. I still can’t believe I did that to someone who did hurt Joohyun.”

“Seulgi, it wasn’t fully your fault, you were too innocent and lack of awareness meanwhile she was so tricky and dirty,” Seungwan comforted the bear, “.. it happened already, we can’t change it, the important one is the future, ahead.”

“Lee Sunmi, that woman deserves to feel how cold the jail’s floor and its iron bars.” Seulgi grabbed her phone tightly.

“She will feel that pretty long.” Seungwan smiled proudly and started to tell about Sunmi’s past one by one to her best friend.

Seulgi couldn’t believe the story which the brunette’s told was really happened, she surprised well whenever Seungwan revealed the woman’s craziness slowly. It just too much, it was really worst, she didn’t expect even Sunmi’s past was that dark, she covered it well so far before all these things happened.

“Yet she still being alive and have good life until this second? That is so unfair, she left so huge wounds to Jisoo.” Seulgi stated.

“Yeah she is the happiness robber, she steals people happiness, even yours and Joohyun. She doesn’t deserve a life even.”

“This case will make her punishment heavier for sure, I don’t know how to say but I am really thankful to have you and Yerim in my life, it really means a lot to me, like really a lot. I don’t know what did I do in my previous life until my present life is so blessed by people like you.”

“Ahhh too much sugar in a line.” Seungwan teased a little, “.. we are here for you, Seulgi. Like you are here for us.”

“Can I hug youuuu?” Seulgi teased back, spread her arms wide.

“Noooo, ew, you smell alcohol so strong.” Seungwan dragged herself farther from the monolid one, she was sure Seulgi drank much but she really amazed by how high the tolerance she had, she was seriously not drunk.

“It is late, go clean yourself and rest well, we will have big event tomorrow.” Seungwan emphasized the words, obviously referred to Lee Sunmi’s cases.

“Yeah, I feel dirty and sleepy, take a bath and sleep sounds good for now.”

Bae Joohyun still had her lamp on this night, she couldn’t sleep, not because her body was feeling unwell, she felt so much better already, she felt fine even, just sometimes bit dizzy but that was normal, she just got back from hospital today. She just couldn’t stop thinking about Seulgi, her dating news not bothered her that much since she trusted the monolid wholeheartedly, but knowing she had no idea where the bear was, it was really bothered her and made her uneasy.

What did she do?