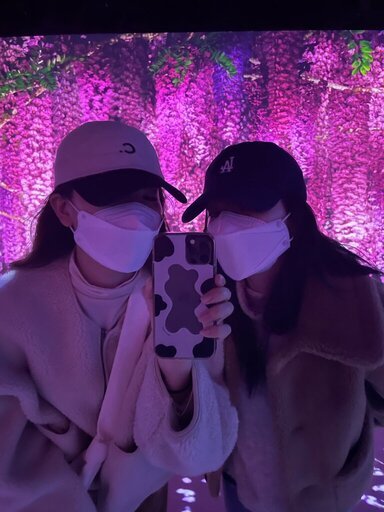 Week passed, this morning was the time for Joohyun to have her medical check up to the hospital, she needed to get more checks even after got back home already, since her body wasn’t fully recovered yet before, but so far she did well, she showed everyone much progress, like not panting anymore only for walking, she was being cocky to her bear that she could run around inside her apartment, but Seulgi stopped everytime the raven did because she didn’t want to take any risk.

Joohyun called her love one with puppy eyes, recently she even so eager to ask Seulgi to ride bicycle again in the park at night when people wasn’t around, the monolid taught her how to ride it patiently when they were together before, unexpectedly Joohyun really loved it, like this time, she tried her luck again.

“I want to ride bicycle with you!”

The monolid just smiled in disbelief, she didn’t mean to be cruel by not letting her to get one, it just she wasn’t really sure about Joohyun’s health and condition, she was afraid if she had little bit heavier activity, it would ruin her progress again, she even stayed there for most of the time to take care of the raven, she only back to her own apartment when she needed to take her stuff for her daily life.

Seulgi just overly worried not without reasons, she ever almost losing Joohyun from her life just because she was being reckless and unaware with the situations, she didn’t want something unwanted happens or any dirty hands touch her woman again, last time was enough, she promised her herself that she wouldn’t leave the raven in any condition, Joohyun had her 25/8 protections.

“Let’s see what doctor says later, alright?” Seulgi answered in very calm tone, she didn’t want to hurt the woman feeling, even just simple wish like riding her bicycle together with her.

“If doctor says yes?” Joohyun sat on her bed while fixing her sweater that she wore to visit hospital this morning.

“Uhmm.. let me think.” Seulgi teased the bunny then walking towards drawer to take pair of the raven’s socks.

“See, you are the one who doesn’t let me.” The raven faced her love one and just pouted.

“I want to recreate our beautiful memories one by one. I miss us, Seulgi.”

The taller couldn’t help but pulled the corner of her lips, she felt exactly same like Joohyun, amazingly they still missed to each other even when they were together already, it just they couldn’t get enough and craved one to another.

“Alright, alright. Let’s have one if doctor agrees it.” She kneeled in front of the woman which still sad on her bed, she was going to put the socks on those tiny feet.

Seulgi only blinked her eyes and gave her dumb blank-face again when she was startled or confused. Joohyun just pecked her on cheek, yes only cheek, not even lips, but it sent a jolt to her body already, she could feel how her skin shivered by the simple touch from the shorter’s lips on her face.

Joohyun only chuckled softly seeing her bear cute reaction, she couldn’t believe Seulgi would be this shy and innocent when the last time she was the one who attacked her first and they would get their very first kiss after these storms if Seungwan’s urgent call not interrupted.

“You don’t like it? Okay I will take it back.” The raven playfully teased and landed her lips on the monolid’s innocent cute right cheek again, pretending that she took her peck again which actually she only added more peck.

The latter still froze in her place, her brain which worked brilliantly like detective last time suddenly being slow and even lagging again in this kind of situation. It was yes that recent nights they have warm cuddle or sometimes Seulgi gave light kiss on her queen’s crown when she was in her deep sleep already, but they didn’t go further than that.

Both of them really let everything flowed, they didn’t rush anything, they just enjoyed and cherished every moment they got back again after long time. But Seulgi just she didn’t expect her woman gave further physical intimate attack in this morning. She loved it, so much, she even smiled sheepishly this time by those pecks on her cheek.

“I love it.” Finally, after for a while Seulgi replied, she continued to put the sock on Joohyun’s right foot, avoided Joohyun’s eyes since she was sure that her chubby cheeks looked as red as tomatoes this time.

The raven cupped her love one’s face with both of her palms, she wanted the monolid’s attention since she still kneeled in front of her but busy with the socks and her feet. Joohyun wanted her those eyes locked into hers, then she got what she wanted, they shared their loving gaze to each other while Seulgi finally stopped her unfinished task on Joohyun’s feet.

Joohyun knew how adorable and charming her woman could be, Seulgi was such a sweetheart to her, very warm and gentle, she didn’t even ask anything more in this huge universe, she would make sure that she wouldn’t waste her once in a lifetime person again, having this one in billions such a bless and big jackpot for her. Joohyun felt so thankful and grateful with her presence and the sincere heart she gave, she wanted to pour her feeling more than before, let the other woman know how happy she was, how completed her life this time, together back to their beautiful floral path.

Those were being good enough reason for the raven to slowly leaned down her face, removed the space which existed between their faces, naturally she tilted her head and shut her eyes. Not waiting more for Seulgi could feel a pair of soft lips pressed against hers tenderly.

Just a feathery kiss, let the butterflies grew inside their stomachs.

There was no single motion Joohyun made, she just stayed still for a while in position, enjoying the feeling of warm breath against their cheeks and their soft lips met in zero distance.

Seconds passed, the raven slowly pulled her own face, she looked calm outside but the opposite inside. They just kissed, her breath was slightly in rush since her heart was pounding crazily. It was not even completely a kiss since they just met their lips, but at least it wasn’t peck anymore, the monolid didn’t push her even, she didn’t face any rejection, another butterfly explosion again inside her stomach.

Something unexpected interrupted Joohyun to finish her word, it was nothing but the table turned, the monolid woman erased the distance between them again in sudden without any warn, it made Joohyun’s eyes widened a bit. She was not even fully processed what happened yet, but this time she felt the warmth and softness she felt before just captured her lips without any doubt.

It had little difference with the previous one, Joohyun could feel clearly the slight tender motion from the latter one this time, it made her grabbed the bed sheet around her and just closed her eyes tightly, didn’t mind anymore if her bear could hear her uncontrollable heartbeat, she felt like Seulgi could take her soul away in peace with those gentle movements in her lips, she loved how her bear was always treating her like a queen, the most precious woman in her life.

Seulgi wasn’t as shy as before when Joohyun gave little attack to her earlier, with no time she grabbed her woman’s waist and rested her arms there, made their bodies closer and perfectly made Joohyun felt secured even though the other one’s body was between her legs and kneeled in front of her.

Joohyun bit surprised with the real kiss she just received, obviously it wasn’t something unwanted, she welcomed instead by putting her arms on Seulgi’s neck, deeply embrace the taller one and returning the kiss that her love one sweetly gave.

It was just a natural process how their lips mold together perfectly in synch, it tasted sweet and soft like a cotton candy, without heat, without lust, without rush. Just about two persons savoring each other feeling of longing, craving and obviously loving.

“Someone still need to meet her doctor this morning.” The monolid broke the lips connection while sending adorable crescent smile on her eyes, their foreheads glued to each other, arms not leaving their previous places.

Joohyun just still panting a little since her breath wasn’t as long as the taller one, but she couldn’t help to curve her lips to form a light smile as reply, because she was still busy with the race in her chest and butterflies inside her stomach. She only caressed her love of life’s line of face with one of her palm, the only creature in this universe could made her heart flutter effortlessly with her gentle and warm touches.

“Someone still need to put the another sock on my foot too.”

Seulgi chuckled softly and gave final peck on her woman’s cherry lips then their distance back to normal again, she grabbed the another sock that she left in the floor because got a sweet distraction and did put that on the raven’s left foot.

“Done.” The monolid smiled in proud, finished her very simple task after a while.

“Said someone who even wants to ride bicycle.” The taller jokingly answer.

Joohyun stood by herself in seconds, gave proof that she was that weak until asked her bear to lift her, when actually she just wanted to be pampered, she couldn’t help that, she missed this feeling so much. Yes, she was being strong and independent woman all the time in public, but in private she was just being Seulgi’s one and only spoiled baby.

“No need to prove okay? I am kidding, Hyun.” Seulgi widely smile.

“Cruel.” Joohyun pouted then walk in bold steps to leave her woman behind.

The monolid laughed and just followed her woman’s sulky steps, without waiting more she chased and scooped the tiny woman with her strong arms with line of her melodious giggle, lifted her like a bride.

“Seulgi!” The bunny just startled as always and sent small hit on the other woman’s shoulder.

“Whose big baby is this?” Seulgi teased while landing a simple peck on Joohyun’s cheek, tried to remove her woman’s sulking face.

“Yours.” Joohyun answered shyly, obviously she couldn’t sulk for too long, Seulgi’s intense stare at her completely made her heart flutter.

Like this story? Give it an Upvote!
Thank you!
← Previous Chapter Next Chapter →
Author's Thoughts
THANK YOU EVERYONE! SEE YOU IN SEQUEL!
Read More →
Back to Top ↑
No comments yet
Back to Top ↑
Foreword
>> Collapse chapters <<
Promoted - Advertise