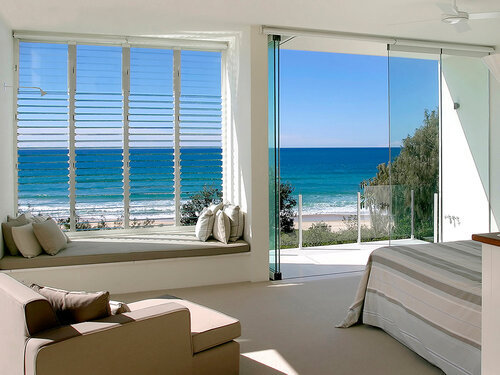 -Bae Joohyun, a woman with Aphrodite’s feature on her face furrowed her eyebrows slightly, she stirred her body a little to the right side, craved for more comfort, but her face even got warmer, the sunlight annoyingly disturbed her peaceful sleep, told her that morning was ready.

Like a whisper, her cute dumbo-like ears catched sound of water rolled itself on the sands gently, she found another comfort with the sound but it was getting clearer as she was done gaining her soul to be awake form her sleeping-beauty, she finally realized, it was the sound of waves, more like ocean waves.

Her eyes closed still, but she couldn’t help to smile a little when this time her nose recognized the alluring smell came from nowhere, smell of well-baked bread and scrambled egg. She sat on her pastel-toned bed for awhile and raised her arms to do a little stretch bit with loosen white shirt and dark short pants, she didn’t feel bothered at all with the size of the shirt which seemed not hers, she could even released a cute yawn, it showed clearly she had a very good sleep last night.

Her tiny feet stepped on the wood-made floor slowly, she didn’t bother to wear any slippers, since she wanted to move while feeling the warmth of the light of sun already filled her room freely by the opened curtain, she walked closer to the wide opened window in her sight and walked in the terrace. Finally, the sun kissed her skin, her gaze fixed on the gorgeous, beautiful scenery right in front of her eyes, the bright sky and the white sands with its clear blue sea.

She closed her eyes just to feel the summer breeze touched her flawless skin gently, moving the dark hairs which hanging on the shoulders without any protest from the owner. She enjoyed a lot, her lungs feel so blessed by the fresh air, and her eyes felt so blessed with the wide beautiful landscape.

Honestly, judging by the view and the atmosphere of the place, Joohyun still had no idea where she was, all she could feel that this place was so heavenly. But enough of admiring the place, she remembered again about the delicious smell she caught moments ago, since her flat stomach started to growl annoyingly. She walked inside again, moving her feet happily here and there, even humming a song, suddenly a thought flashed on her head.

Maybe, I am dreaming.

She kept walking around to find the source of the good smell, her eyes scanned around the rooms, she found nothing but furnitures. But finally her eyes landed on the kitchen, not because she could see clearly the toast placed perfectly on the white plate, but she found a creature standing calmly there, Joohyun couldn’t see the front side of that person, since she got back-faced, but she knew well whose figure it was.

Black hairs tied lazily like a messy bun, the wide shoulders which used for hanging the apron, spatula grabbed well in well-built arm, the slim yet strong legs which used for moving there and there around the cooking section.

Joohyun’s world felt like in slow-motion, her brain found the name of the person, but she couldn’t release it yet, just not yet. Until that person recognized the frozen Joohyun in her place and turned around, that person sent a very sweet smile as their eyes met and gaze locked.

Joohyun legs felt like a jelly, it couldn’t support her own body anymore, even her sight was getting blurry since her eyes were full of water which could fall anytime it wanted.

“Hey.. hey, what’s wrong?” That’s someone ran like a  light to hold Joohyun’s petite body to fall on the floor with her arms. The smile still plastered on her face, even warmer.

Joohyun tried to touch the other person’s face, she touched it gently like a glass, felt the softness and the warmth of the skin, she recognized well this face, even every single inch. Her cry finally broken, tears flew like  waterfall on her cheeks.

“Seulgi..” Joohyun whispered, her eyes still locked on those monolid eyes. She couldn’t believe she could touch the taller’s woman face after long time, even grabbed it gently.

The raven’s heartbeat stopped for a moment as she hear a sacred word from the latter. Her heart felt so full and contented.

Bae Joohyun finally smiling wide even the tears still decorating her goddess-like face, she even giggled softly, she knew well this was a dream, only dream, but she forgot when the last time she could feel this happy, finally she had the beautiful and peaceful dream one, the kind of dream which she couldn’t have for past year.

“I I am.. your wife?” Joohyun reassured doubtfully.

“Who else?” Seulgi chuckled, “..you are my one and only wife.” She embraced the smaller body tightly.

“Wife?” Joohyun repeated the word again with low tone on Seulgi’s chest. She continued her crying, even the sobs were getting loud like baby, Seulgi only found it cute and the hairs gently.

“Show me your hand.” Seulgi broke their hugs and stared and Joohyun lovingly.

“Look.” Seulgi showed her own hand which slightly bigger right next to Joohyun’s.

Joohyun covered as she saw the sparkling circle thing between her fourth finger, even Seulgi had it one in her finger too, another small river flew smoothly on her cheek, they wore rings, a pair one.

“Our wedding ring,” The monolid explained, “..you still can’t believe we are married already?”

Another line of giggle released, it sounded so melodious