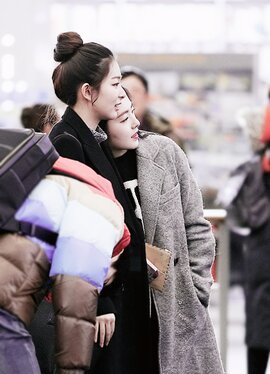 That was on Seulgi’s head right that second, she didn’t believe a Bae Joohyun stood really right in front of her door, she was slightyly thinking that was dream, but she was here, looked at her with very loving but look so tired gaze, the dark circle visible lightly and the eyes looked not as bright as usual, it showed clearly she was exhausted.

“I was having photoshoot in Japan.”

The monolid cursed at herself, she didn’t mean to be that cold but somehow she had to.

“I asked my manager to drop me here.” Joohyun smiled a bit.

“Why?” Another cold reply.

“Because I heard you are sick.”

Seulgi’s heart felt like getting squeezed, no matter how hard she denied, Joohyun still the one whom be able to shake her heart effortlessly.

“Go home.” Seulgi tried to close her door but Joohyun’s hand stopped it, the monolid woman only standing behind her door.

“I am home.” Joohyun answered softly.

“Stop it.” Seulgi closed her eyes, she dealt with her familiar feeling again, a pain.

“Stop it!” She raised a her voice a bit, her tear was falling smoothly but she wiped it immediately.

The silence sounded so loud between them at that moment, Joohyun felt the pain as much as Seulgi, she knew the monolid woman tried her best to hold her feeling, she could be able to see clearly how Seulgi was very struggled and suffered because of her, she was almost crying too but she couldn’t do that in front of the person she did hurt badly, she must be strong, she was the one whom need to pull them from this painful circle, and she was still fighting for it.

“Alright..” Joohyun smiled in pain and pulled her hand from Seulgi’s apartment door, she just let incase Seulgi wanted to close it. “..I wont force you.” She continued, breathed heavily.

Seulgi didn’t say any word, she was still hiding behind the door, if she looked at Joohyun’s eyes again, Iit would break her wall instantly.

“Get well soon, Seulgi-ya..” Joohyun’s voice bit shaking because she held her tears. “..dont have nightmare and have a good rest, because you deserve it.” She finished her words perfectly with teary eyes.

Still no reply from Seulgi, but she didn’t close the door either, she was just standing still, holding her tears and her feeling painfully.

Joohyun smiled once again eventho Seulgi didn’t see it and finally decided to go, only few steps she stopped her walk, hoping Seulgi changed her mind and came out to call her, but she heard the sound of door closed instead. Right at that second, finally her tears falling like a small river, those flawless skin was wet instantly, she couldn’t hold it anymore, she knew everything was her fault, but she never prepared even once in my life to experience this, for years she used to live with Seulgi’s love, being Seulgi’s one and only baby, but now she had to stand alone, fighting alone, crying alone, without Seulgi.

“It hurts..” Joohyun covered to cry loud. “..I wont ever get use to this no matter how many times you side me in your life.”

Joohyun wiped her tears roughly and continued her walking. In the other side, the monolid woman only leaned her back on the door, she was still standing there, eyes closed and shaking lips, she was near to cry.

Seulgi still drowning in her mind but suddenly a very loud sound broke the silence, it was nothing but thunderstorm, she was shocked too and checked the window, she opened the curtain and she could see the water fell slowly. She closed the curtain again, she felt uneasy, yes she wasn’t fine because of something, unstoppably the rain started to pour heavily.

“Raining?” Joohyun said in the middle of crying, she was outside already and waited taxi to appear in the side of road, she opened her palm just to make sure it was really rain, unluckily it was rain and it dropped heavily only in seconds, she cried again with palming her face, without any sound.

Joohyun realized it was late already, she couldn’t text her manager to pick her and the weather couldn’t be friended well with her too, until she felt someone walked closer to her, she didn’t mind but kept crying, all she could think was how hurt heart was, all she needed was only one in billions.

That was the only thing on Joohyun’s mind since the only thing would make her felt so fine, in peace and safe, she craved her Seulgi badly, she wanted to hug her, she wanted to heal together, everything was back like it used to, but when she was too busy with her thoughts and kept crying, she was finally realized that the water didn’t pour on her anymore, turned out that someone shared the umbrella with her. Joohyun didn’t feel bothered at all, but kept crying on her palm.

“I know how hurtful crying without sound is.”

The voice stopped her mind for awhile, her brain recognized that soft and gentle voice very well, the owner of that voice was the only person that filled Joohyun’s mind whole of time, for some times she thougth it was hallucination but she gathered her soberness surely.

“S-seulgi?” her voice was shaking, still giving unbelievable look with her watery eyes.

Yes it was Kang Seulgi with her dark umbrella, walking in the middle of heavy rain, let herself got wet eventhough having unwell body, eventhough it was late already, but she did that, she did that for Joohyun.

Joohyun still felt so amazed how Seulgi let herself in rain just for her, she never imagined this thing would happen, she couldn’t believe either creature like Seulgi is exist in this life, in Joohyun’s eyes Seulgi felt like jumped out from fairytale, because right that second the monolid woman just looked like a knight in shining armour, not a sword obviously, only umbrella on her grip, but that was more than enough, Joohyun didn’t need anything in this world, she is complete, very complete, having Seulgi beside her and protect her like this.

“Get inside.” Seulgi finally answered without looking at Joohyun.

“W-where?” Joohyun said in the middle of her soft sobs, she stopped crying completely, because her wish was granted, but her brain still couldn’t process well because the surprise.

Joohyun nodded immediately and made herself closer to Seulgi’s body since they were in the same umbrella, they were really close until Joohyun could be able to smell Seulgi’s scent clearly, she loved it much, she wanted to scream loudly just to make the world knew how happy she was being this close with Seulgi, eventhough light sobs could be hear but she was totally forgot that she was crying for this person too. Seulgi didn’t take any glance too Joohyun, she kept looking straight on their way to building, but completely different with Joohyun, she kept locking her eyes on the taller woman’s flawless face features, the jawline, the thin lips, and obviously the absolute charm, a pair of monolid eyes.

“Watch your way.” Seulgi warned as Joohyun almost slipped because too focused on the taller one.