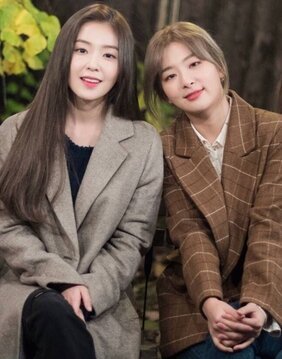 Joohyun was blind-folded by Seulgi, she just followed the path while Seulgi did the lead. It was late already, even passed midnight but only that time they could hang out freely and enjoying place, since they were public figure, moreover Joohyun was so easy to notice by people when she is around, so that’s why Seulgi decided to bring Joohyun there this late, so the could have the place peacefully.

“Is it cold?” Seulgi asked warmly, like she removed the cold of night with her voice.

Joohyun nodded lightly, “I hope you don’t do something silly, Kang Seulgi.”

The taller woman chuckled softly, she would not do that, obviously not today.

“You can open your eyes slowly, okay?”

Joohyun opened her eyes slowly as Seulgi said, adjusting the sight surely, the place wasn’t too bright but wasn’t dark either, she blinked few times to make sure what she saw, because the view was no joke, Han river at night is very beautiful, the light reflection of buildings and the lights of the long bridge were blessing their eyes, it looked so sparkling and colorful because the darkness around, Joohyun thought it was just simply perfect light for them to have seat and kill the time together like they used to before, yes, when they was still being high schooler they often hung out there at night, just to talk about how was their day, the dreams they had and the love they shared. That’s why that place is very nostalgic for them.

“Oh my..” Joohyun eyes opened wide, they both were happy to be there again since it was long time already since the last time they visited, they were too busy with life and the dream they reached already.

“I miss this so much.” Joohyun hugged Seulgi’s arm tightly and rest her head on the board shoulder.

“I miss as this as much,” Seulgi placed a sweet peck on Joohyun’s crown. “..these are prettier right?”

“I remember how you cried because you failed on your first attempt on audition.” Seulgi brought the memories.

Joohyun chuckled “I was still so young back then.”

“You practiced hard already, but they didn’t pick you.” Seulgi answered sadly.

“Until I was thinking, should I give up on acting and just continuing my parents’ restaurant business?”

This time seulgi followed to chuckle, “Until I was thinking, should I be the Director so I can make you a movie?”

“You did it, look at you now, Director Kang.” Joohyun teased.

They shared their laughter and holding each others tighter, they night wind was pretty cold since it was fall season, but they didn’t feel it at all, since they had each other, they didn’t need anything, they were complete.

“Hyun.” Seulgi broke the silence, they were just enjoying view, atmosphere and the warmth they shared before.

“You are my north, my south, my east and west..” Seulgi confessed with her gentle voice.

“The sun of my morning, the moon of my night..” Seulgi continued.

Joohyun smiled wide, “That was swee—” her eyes widened and gasped as Seulgi showed something from her pocket.

It was just small box with Joohyun’s favourite color, purple. As Seulgi opened the box slowly, Joohyun could only cover her hanging open mouth with her palm, she was shocked and almost forgot how to breath, the small thing inside it looked so beautiful and it sparkled prettily a bit because the light. Seulgi just smiled and didn’t take her eyes off Joohyun even a second.

“I cant promise everything will be perfect, but I promise I will make it works, no matter how hard it gets,” Seulgi smiled, “..Bae Joohyun, be mine forever, will you?”

Joohyun’s eyes got teary, she couldn’t hide her happiness at all, she was beyond happy, her heart was about to explode, it was feeling so full. Get a sweet, warm and loving proposal is one of every girl dreams of their life, and finally her love of her life, made another one her dream came true.

“Don’t cry, Hyun.” Seulgi wiped the tears softly, “..give me your answer.”

“Yes, forever is a long time, but I don’t mind to spend it with you, Kang Seulgi.”

Seulgi formed her crescent eye-smile on her bear-ly face and grabbed Joohyun’s hand gently, she took the ring and placed it on the tiny woman’s finger slowly, Joohyun kept looking at it, how it wrapped well and perfect there, she smiled again to the monolid one.

“It is so pretty.” Joohyun touched it and kept smiling.

“Glad you like it.” Seulgi still giving Joohyun her loving gaze.

“You choose the best place too. I still cant believe.” Joohyun leaned her head again on Seulgi’s shoulder, the other woman just pulled closer by holding the tiny one’s wai