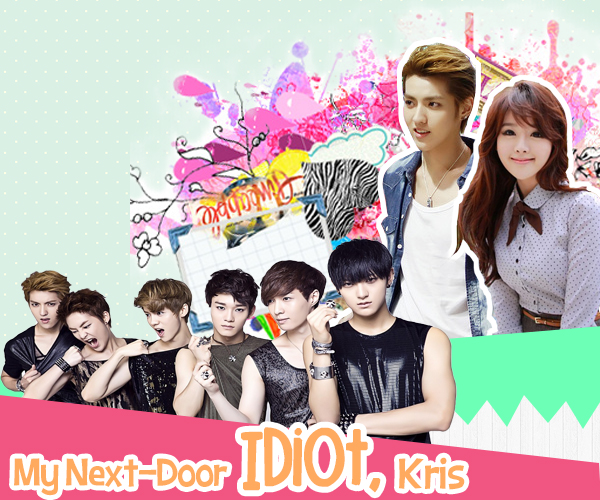 I woke up the next morning with a headache. I didn’t drink too much soju last night, so I should be alright. I looked around to see all of EXO-M gone, along with Xiumin’s car. Hmmm, they must have left early so they wouldn’t get caught by my parents when they leave for work.

I saw Kris sleeping soundly in the corner.

The lump of a body furrowed his eyebrows and suppressed a moan. Great. The idiot got himself so drunk last night and can’t even wake up. How am I supposed to get him off the roof?!

I sat beside him and started rolling him to edge. I then pushed his legs out a little so his legs were dangling over the side of the roof. I leaped off and landed on my feet, the impact stinging through me.

I grabbed onto one of Kris’s ankles and used every inch of my strength to pull him down from the roof, which quickly turned into a terrible idea when Kris’s body started hurdling down at me. There was absolutely no time for me to react before he crashed onto me and knocked me down on the floor.

“Okay...We’re...Finally...Here...” I panted as I dragged Kris into his room. It was pretty much the most exhausting thing ever to bring him through his house and up the stairs, and I feel like I’m going to pass out at any moment.

I attempted putting Kris up onto the bed but just gave up, leaving him sitting against it.

“I think...I’m going to rest...Just for a little bit...” I said before falling asleep on the floor next to him, my head leaning on his shoulder.

“Yeah!” Some of the EXO-M members hooted and pumped their fists in the air encouragingly.

“No. I won’t let you.” Luhan stared at me intensely. He looked so serious it was hard to believe he was drunk just a minute ago. His glare could turn me into stone.

“Oh... It’s getting kind of tense in here.” Chen said awkwardly. “Why don’t we let Jihae pick who gets to kiss her?”

“That sounds fair.” Xiumin said. All heads turned towards her direction.

“Can’t we just move on with this dare?” Jihae whined.

“Then... I want Luhan to kiss me.” She said. Some of the members smirked at Luhan and I heard a few ‘ouches’ directed towards me.

Luhan and Jihae met each other’s eyes and I felt something sour burn through my throat. A part of me wanted to look away and another part couldn’t keep my eyes off of them. I watched as Luhan leaned in and planted a kiss on her cheek.

“Awwwww Luhan!” The members disappointedly started punching him. I felt something loosen inside me in relief.

“You totally ruined everything.” Lay hissed at Luhan.

“Hey, if I kissed her on the lips I don’t think I would have been able to control myself.” Luhan smirked at Jihae, causing her to blush.

I woke up this morning with a huge headache and the urge to punch someone in the face. I felt something on my shoulder and looked to my left to see Jihae sleeping peacefully.

She chose Luhan over me. Well I shouldn’t be surprised; I mean she has had a crush on him for a while. Why would she ever

Please Subscribe to read the full chapter
Like this story? Give it an Upvote!
Thank you!
← Previous Chapter Next Chapter →
Author's Thoughts
hi everyone im back! if u r still here i love u so much <3
Read More →
Back to Top ↑
No comments yet
Back to Top ↑
Table of Contents
Foreword
>> Collapse chapters <<
Back to Top ↑
Community Promoted