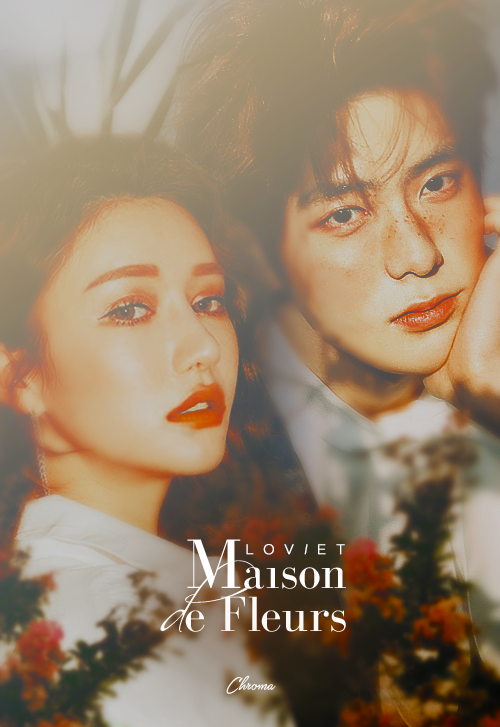 "Black tea, detective. All this time black tea!” He exclaimed.

Ayeon leaned against the couch, propping her cheek up with her palm against the arm rest as she watched him. “I don’t understand how you have the energy for this. It’s nearly midnight.”

“You knew I was losing sleep over getting you on tea. You’ve been stashing your own stock away this entire and playing dumb while I was going insane.”

Her lips twitched as she blinked heavily while watching him move back and forth, she felt like all of her actions were weighed down with lead but all she wanted to do was smile.

She raised her brow, “Who said you weren’t the one that did?”

“Because I never gave you black tea.” He accused with narrowed eyes.

She bit down on her lip, fighting back the smile that wanted to break out, “You’re the reason I bothered strolling down the tea isle.”

He dropped down next to her and let his head roll over to look at her, “Take me grocery shopping with you next time. Your fridge is embarrassing, detective.”

She rolled her eyes good-naturedly, “That’s too—”

“Domestic? I disagree, I’m helping prevent a crime.” He stated.

She laughed, his eyes warming at the rare sight, “Well if you manage to ambush me and drag me out to the grocery store, it can happen.”

He was arguably the most beautiful man she had ever welcomed in her presence. Ashy brown hair falling over his brow, slow smiles, eyes that curved and shone with emotion, dimples that trapped his smile in.

She made the horrendous mistake of letting her eyes fall to his lips. Like petals. She thought, soft, silken and unrealistically pink. Her second mistake was meeting his gaze, drinking in his widened eyes, blown pupils and bated breaths, frankly, it was all quite stunning. She was so tired, but she swore she could just sit and stare at the way his face moved for hours.

He stared at her, eyes running down her face, skimming the bridge of her nose before matching her gaze, right at her lips. Plush, reddened by fading lipstick, and warm. She always looked warm. Like a sunflower, tall, confident and turned up to the sun. His fingers twitched on his lap like he was itching to reach out and do something.

“I should get some sleep.” Her voice was grated with fatigue and it wrapped around him like a blanket on a chilly morning. “The guest room is all yours.”

She didn’t move from her spot on the couch so, he did them both a favour by standing up first. “Good night, detective.”

Her smile this time was smaller and sadder, “Good night.”

His steps were steady, but he moved fast into the guest room before shutting the door behind him. His heart was in his throat and ran his hand through his hair. This wasn’t good, this was terrifying, this was uneasy, this forced him to question his long-standing beliefs and principles. This wasn’t him being politely friendly to the detective taking his case. This came out of nowhere.

This was him knowing that if she leaned closer towards him, he would’ve kissed her. Right there. And he would’ve meant it.

Ayeon sat on her couch, a tub of ice cream she didn’t even know she had, next to her as she stared at the blank television screen. Her eyes would linger on Triple who was passed out in a divine slumber. It was a nice night, even though sometimes her mother’s visits could be exhausting, she was happy. But for some reason, sleep wasn’t coming easily to her.

Her life had changed so drastically in the last months.

She glanced at her phone, mulling over the text she got from Mina. It initially annoyed her that she got her hands on her personal number, but there was something in the word Emergency that gave her pause.

But then she remembered that this was the girl that locked herself to a chair in a police precinct and lied before to get a meeting with her. She wasn’t about to take Mina’s words on face value. She didn’t trust reporters.

She poked at the ice cream as she wondered what Jaehyun was doing; if sleep was coming easily to him or if he was doing okay. Her brows wrinkled at the thought of his face scratched up, injured, running scared. And then she thought about how some people just carried the burden with them, just to take cards they were dealt and just soldiered on.

The floor under Jaehyun’s feet creaked in response, “I guess it’s being in a bed that isn’t mine. What’s your excuse?”

“Grab a spoon.” She mumbled while keeping her gaze forward. “I don’t know, just can’t sleep, I guess.”

Triple, most likely smelling Jaehyun, awoke, stretching. He shook his head before watching Jaehyun sit next to Ayeon with a spoon in hand. Triple sat up before skipping over to them. He jumped, with the precision of a three-legged cat, and nestled between them.

“Your mom is a force to be reckoned with.” He commented while taking a spoon full.

She snorted stuck her spoon in , she had already powered through more than half the tub, “You’re being generous. I’m sorry if anything she said made you uncomfortable.”

“She’s your mother, it makes sense that she’d be cautious of a strange man in her living room, making himself home.” He reasoned.

She hummed and set her spoon down, “Yeah, something like that.”

“Do you know, I think you’re remarkable.” He said quietly.

She stilled before gripping the carton tightly, “What are your two truths?”

“I’ll only need one other and a lie.”

She snorted a laugh and shook her head, but he cut her off, “And before you try to distract me, it only has very little to do with the money you lent me.”

He took another scoop and she couldn’t help watching him slip it into his mouth, something dangerous curling in her gut, the same danger she felt when they were seated on this exact couch just a few hours prior. “Mmhmm, have you ever stepped back and looked at yourself for who you are? Someone who puts herself before others? Someone who cares so deeply, so loyally. You manage pain with a steady hand, albeit maybe too steady, you are a rare entity.”

“How so?” She challenged.

She watched him curiously, “You make it sound like I’m an anomaly.”

“It is in my world.” He said passively.

“Does this have to do with your sister?” She asked gently.

He was silent for a moment, taking a slow bite of ice cream before nodding. She could see evasion from miles away of a person not yet ready to engage in a conversation they were forced into. Her heart tugged at a feeling she knew all too well.

Ayeon reached out and slowly slid her palm up and across his shoulder until her fingers could brush the back of his neck, “I’d like to get to know her one day.”

He shivered at her simple touch, but his body melted in delight, delight that was becoming harder to control, “She would’ve adored you.”

“Oh 100%, the leather jacket, the gun, the heeled boots, she would’ve wanted to be you for Halloween.” He could see it in his mind, the way his sister would’ve looked at Ayeon like she hung the stars in the sky.

She dropped her hand and picked her spoon back up, “Now I really want to get to know her.”

“I think I could make that happen.”

And it was fine, setting aside the tub until it melted into a liquid, chatting tiredly until they exhausted every surface level topic and the pair of them retreated to their rooms to finally let sleep take them. And it was fine as they went on with their morning routines, making breakfast together despite her constant qualm with the domesticity of it all. It was fine when they parted ways at the front door, both claiming to have different errands before work.

And it was fine when they both took a moment to watch the other walk away, trying to decipher the yank in their chest that came with a string being pulled taut.

It was simply all fine.

The last time Jaehyun was in this building, he was dragged from his morning run and learned about his parents’ debt long after the three of them were estranged. He had sworn never to step foot inside ever again but then again, if coming back here meant the end of this nightmare, Jaehyun would tap dance his way in.

He still eyed the run-down building with apprehension before pushing the metal door open and stepping in. The first thing he noticed aside from the smell of weed and stale beer, was the fact that no one was making eye contact with him. They would fidget when he passed by, almost like they were scared of him. That only made him more nervous.

Chae Wong was a terrifying man to owe money to and his minions of men weren’t that much nicer. He walked up to a door guarded by two of said minions but before he could even give his name or state his reason for being there, they just opened the door.

He gave them a tense smile and walked in, his shoulders stiffening when it slammed shut behind him.

Chae Wong was seated behind a table scattered with guns and drugs, a part of him wanted to laugh at the irony, but instead, he just walked over to the heavily tattooed gentleman seated behind it.

“Here.” He said carefully, setting the envelope in front of him, “Paid in full.”

Chae said nothing, no sarcastic quips, no taunting remarks, almost like he was waiting for him. He watched in disgust as Chae lifted the envelope and gave it a sniff before glaring it as it. If he never saw these men ever again it would be too soon. Chae opened the envelope and counted the bills one at a time until he was satisfied with the total. He looked Jaehyun dead in the eye before standing slowly.

He stretched his arm out, “Well, it was a pleasure doing business with you.”

Jaehyun ground his teeth together and took his hand give it a firm but brisk shake before letting it drop, “Hope to never see you again.”

Chae grinned like a Cheshire cat, “Likewise. Send my regards to your folks.”

Jaehyun slipped his hands into his pockets to hide the fists that were forming. He gave him a half-hearted tight-lipped smile bef