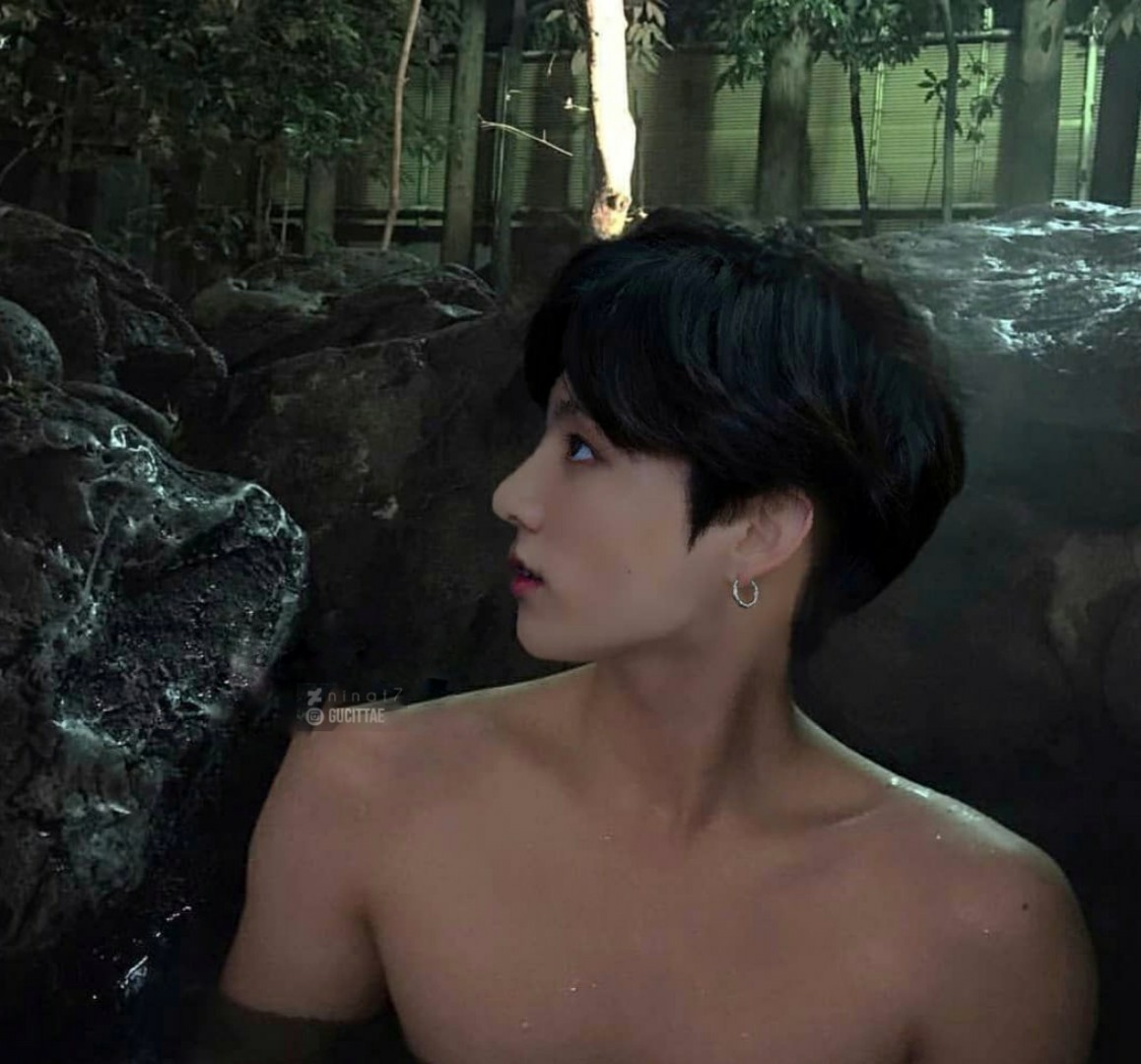 Jungkook entered the hot spring and saw Jimin on the other side smirking.

They both stayed in there silent enjoying the warm water when suddenly Jungkook started hearing water splashing. He quickly opened his eyes to see Jimin making his way toward him. Feeling a sudden discomfort, he started agitating, preparing to getaway.

Jk- what are you doing?

Jm- calm down your hand will get into the water if you continue to move. I am just getting out now Haha

Embarrassed by his reaction, Jungkook just looked away. But when his half upper body was out of the water he couldn't help but noticed the ugly scar he had on his abdomen.

Jm- are you curious? If you come closer to me I will tell you

To Jimin's surprise, Jungkook started walking out of the water and coming toward him. Both and a toward covering their half bottom. Now closed up their height difference was very noticeable. Both started staring into each other eyes before Jungkook started again.

Jm- ah right... Hmmm, there's no much to relate. I just went crazy and was pierced into the stomach.

Jimin said while wearing back his clothes decided not to reveal more. Jungkook just stared at him, no emotion was seen in his eyes. But Jimin thought that Jungkook was probably pitying him right now and Jimin didn't need anyone's pity. Not then and not now.


Unexpectedly when Jimin was about to leave, Jungkook suddenly grabbed his arm and asked.

Jimin was shocked. Most people would have asked what he meant by going crazy or how is he still alive right now. But Jungkook had weird anger in his eyes by now confusing Jimin. He grabbed Jungkook's hand with his other hand and made him let go of his arm gently.

Jm- oh why... Ohh you must be thinking what kind of a strong man he was to be able to attack such a powerful magician... haha don't worry I was at a vulnerable situation and anyone could have killed me. It wasn't someone that important to remember. Let's go now. Tomorrow is going to be a long day.

Everything was burning around him. Blood was flowing on the ground to his feet. It wasn't his blood. He couldn't think anymore when suddenly he felt an acute pain in his abdomen. When he looked down, it was now his blood he saw. He fell to the ground coughing blood. And he uttered his last word "Jihyun". Jimin woke up startled. The first he saw was who was shacking him for a while now. Jimin felt tears in his eyes and quickly wiped them off.

Tae- Are you okay?

Jimin stood up from the bed and then was met up with Jungkook's figure.

Jm- ah are you guys still mad at me for yesterday? Hahaha

Jimin said thinking that if it wasn't the case at least now they are reminded and that they would forget what just happened. It seemed to work because now the conversation seemed to change.

Tae- of course, we are you could have to kill Jungkook. Jungkook we can't trust him. What do we do?

Jk- He probably thought if I wasn't worthy of the sword I would not be worthy to be the king himself. Can we blame him for wanting a good king? He now must pledge loyalty to me else he will be like a prisoner to us.

Jungkook finished with a drastic voice.

Jm- oh Jungkook there's something you must understand. The one that wants you dead the most is probably me and you want me to pledge loyalty to you?

Jimin started laughing. And Jungkook sighed. With a loud noise, Jimin eyes opened wide, probably understanding that he had just been hit violently in the head. Slowly his eyes started to close and he fell forward right in Jungkook's arm.

Tae- ouch that must have hurt.

Jk- you could have gone less brutal.

Tae- sorry I could not suppress my anger.

Jk- let's tie him up and put him on his horse.

Tae- yes. Why does he hate you like that though?

Jk- I don't know. But I am guessing it has something to do with his late brother.

Jungkook said while carrying Jimin bridal style to his horse. His hands were already tied up. The rein was now tied up to Jungkook's horse.

They both hopped on their horses and continued their Journey.

When Jimin woke up, he had a headache so he just closed his eyes again and pretended to be still unconscious. When he realised how they tied him up. He couldn't help but smirk. Did they think he wouldn't be able to free himself? But Jimin was too tired to waste his energy so he just went with the flow. They were now two days away from the north if they stopped for the night and they decided to do that. This way they could train themselves and rest for the night moreover the horses needed to rest too. Tae got down his horse saying he would go get the wood for the fire. Jungkook got down his horse too and went toward Jimin's horse. He removed whatever was tying him to the horse and took him down.

Jk - You know, you should stop taking advantage of people.

Jungkook said while still carrying Jimin in his arm and putting him down somewhere more comfortable. The night was getting colder. Jimin coughed a few times before replying.

Jm- if you knew I was awake why did you hold me up.

Jungkook said while taking out his dragon sword and started training himself. Jimin just sat there watching him. Jungkook right hand was trembling probably because of the wound. Suddenly Jimin appeared in front of him and held his hand to stop him. Jungkook stared at him in his eyes not even shocked by how Jimin freed his hands.

Jm- You shouldn't abuse your damage hand like this.

Jk- You should go back there before Tae comes back.

Jimin gently turned Jungkook hands in a way to tell him to let go of the sword. And Jungkook complied. Too distracted by Jimin's features to care about what Jimin was doing with his hand.

Jm- What a loyal dog you have.

Jk- Don't call him that. He is my friend, my only friend who I trust and would die for.

Jimin started taking out the cloth covering the wound and grimaced when he saw how bad it was.

Jm- You can't die for anyone. You need to fulfil your destiny and that will cost you a lot of sacrifices.


Jimin covered his wounded hand with his own and looked straight into Jungkook's eyes distracting him.


Jk- I will save my people. And protect my beloved ones. I need to be worthy of becoming the king. And a king doesn't abandon his people. He protects. I need to become the strongest and immune to a small wound like this.

Jm- come on you can't become the strongest with a hand like this. Go on continue.


Jimin said while going back to where Jungkook had put him before. Magicians can heal people but when it comes to themselves, if their wound is deep they would probably not have enough energy to even do something. And it won't work if that person has lost too much blood. The more powerful the sorcerer is the better they can heal someone but their life span decreasing with it.

When Jimin went back and sat down suddenly he has turned around and saw Jungkook face-up close. His hand was around his neck. Jimin started to cough and held Jungkook hand back trying to pull him off.

Jungkook stopped realising something. Jimin neck was a way to hot that normal body temperature. He quickly let go of him and held him.

Tae- why every time I come back I see you in such an awkward position... What did he do now Jungkook?