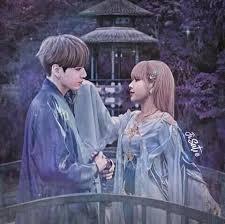 Jm- yeah like this, do that she will love it...
Jimin said while panting and still looking into Jungkook’s eyes. His expression suddenly changed to something unreadable and Jimin pulled both of them away from each other. He took some paper and continued his work.

Jm- was it your first kiss Prince Jungkook?

Jk- you seemed to have a lot of experiences.

Jm- hehe I was always famous among ladies Jungkook-shi.

When Jimin lifted his head, he saw that Jungkook was long gone so he stopped faking being busy and threw his back against the chair while looking at the ceiling. He exhaled and touched his lips.

Jm- ha.. what’s wrong with me... I must be overworking myself these days.

He closed his eyes and put both of his hands on his face. After some minutes he took his hands off and opened his eyes, to continue his work now more serious than ever.

The next day he woke up still in his office with a cover on him. He was guessing one of the servants took pity and does this most of the time. The palace was in chaos when he got out of the room. People were rushing everywhere. Jimin thought that it would be a really big ceremony it seemed. He was very tired so he decided he would rest for today as tonight he would be very much needed with the guests as he knew Lisa a bit too well. He went into his room and slept for some more hours more comfortably this time in the soft bed.

Jungkook was busy training his muscles when he suddenly heard someone approaching. When he looked who it was, he just continued.

Tae- Jungkook I need to talk to you.

Tae- stop for a minute will you? Come and sit next to me.

Confused Jungkook put back his sword and went to Taehyung.

Tae- yesterday I was searching for you and ended up seeing everything.

Tae- will you marry Lisa? What about your happiness? Why just not give up oh that fake destiny?

Jk- and what? Make all those people who died go in vain? Let my people continue to suffer because of the ruling of the Lees? I can’t do that. He was right a prince has a responsibility and I am accepting them.

Taehyung hugged him and Jungkook just hugged him back. Both knew the hardest and most painful moments of their life was coming soon.

Jk- hey it’s not that bad Tae Hyung... Lisa is an amazing woman and if it is her I think maybe it will be okay.

Tae- how can you say that when someone else has your heart?

Jk- feelings can be kept hidden

Jk- I will keep her well. I will make her happy... that’ what Jimin wants me to do too.

Tae- you will do that more for him won’t you?

Jungkook didn’t answer and just stood up and continued his training.

Jimin was woken up by his door opening with a bang.

Lisa- yo wake up I need you to choose a nice dress for me.

Jm- Noona everything looks good on you just let me sleep some more.

Lisa- wake up it is late already. Here I brought you some nice clothes to wear especially for tonight. I mean my dear best friend and the right hand of the Queen needs to be nicely dressed right.

With that Jimin woke up instantly and looked at Lisa with big eyes.

Lisa- yes Jimin-ah now quickly wake up I will make the announcement just before the banquet starts.

She said while leaving the room. Being the right hand of the queen meant a lot of things and he would have a lot of power in Lisa's kingdom. Lisa was not stupid for giving Jimin this title cause of course no one would do a better job than him. He always took the right actions and clever decisions. But also being the right hand of the queen also meant complete loyalty to the highness. Everything he would do must be reported to the ruler and he must always have the permission of the ruler to go out and in of the palace. This is probably a way of telling Jimin that he too would need to give something for her to marry Jungkook. Jimin signed knowing clearly where this was going and he had no rights to refuse any.

He stood up and prepared himself for the banquet. Arriving into the hall, he saw Jungkook and Taehyung standing side by side while looking at the people dancing and he quietly made his way there. And put each arm around both Jungkook’s and Tae's neck.

Jm- I can see that the queen made sure her future husband stands out.

Jk - I can say the same for you but the reason?

Jm- hmm? You will soon know.

Suddenly the queen stood up from where she was sitting and everything went silent.

Lisa- very well everyone good evening. I I would like to start the banquet with an announcement. Dear Park Jimin, please make your way to the front.

Both Jungkook and Taehyung turned to look at Jimin who just took his arms off them, pulled his clothes and went to the front on one knee.

Lisa- sir park Jimin will from now on be my right hand. Every decision made in this palace should be acknowledged by him.

Jimin stood up and Lisa had put a badge on him indicating her property and his power from now on. He turned and looked and the people who started to applause.  He was famous. Famous for the chaos he made when he was small but also people knew he did a lot of exploits. So people knew this decision could be one of the best made cause now he would have limits that he won’t be able to cross.

Lisa- very well then the banquet starts now. Please sit down and enjoy.

Everyone took their respective places Jimin next to Lisa and Jungkook next to Jimin. Jungkook didn’t have much reputation to be sitting next to the Queen right now so it was another important member of the office who sat next to the Queen.

-    Working with you will be a pleasure, sir Jimin.
The other people said and Jimin politely smiled and thanked them. When everyone seemed to be in deep conversation Jungkook started murmuring to Jimin.

Jk-seems like the dog finally has a leash now.

Jimin rolled his eyes. Of course, Jungkook understood everything.  He was a clever prince even if Jimin don’t want to say it loud.

Jm- have fun dear prince now is Your turn to do your job.

Jk- of course, I have been taught by the best Teacher, haven’t I?

Jungkook said and Jimin just snickered and looked elsewhere. Jungkook stood up and went to the front with his hand reaching out to the queen while bowing.

Jk- will his highness give me the pleasure to have a dance?

Lisa looked surprised and without much hesitation took his hand. People were talking by then. ‘Who is this person' ‘ why is the queen close to him' and the best reply was ‘i heard he is a prince that is courting the queen'.

Hearing all this Jimin called Taehyung near. He told him to go among the people and to enter the conversations, then to tell them that the prince in front of them is the owner of the dragon and the one who would be saving everyone from their misery.

Soon enough Taehyung did a good job with starting the rumours.  The voices were becoming louder and louder and people were clapping their hands more enthusiastically for the queen and the prince.

Be My Fake Girlfriend?

Hoseok is tired of people teasing him for being single. When he lies saying that Jisoo is his girlfriend, what will happen? And why is Jisoo going along with it?