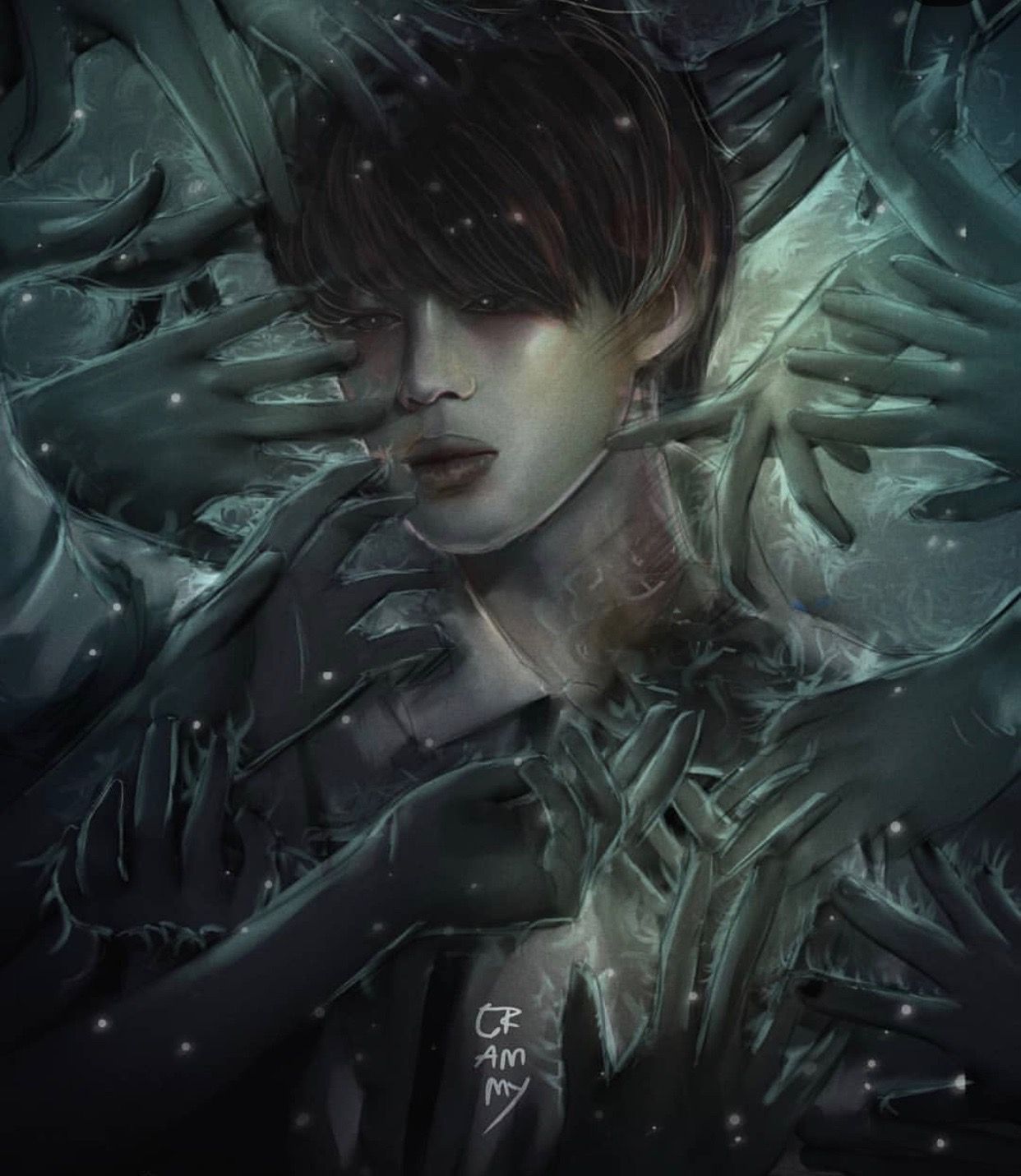 Soon in the early morning Taehyung and Yoongi were seen arriving in Lisa's kingdom. Hearing their arrival Jungkook quickly got down to see them. The first thing he did when he saw Yoongi safe and sound, was bringing him into a tight embrace.

Jk- hyung! It is so good to see you again.

With a bright smile Jungkook turned to Taehyung and hugged him. The moment he let him go was when he realised the stressed out expressions both Taehyung and Yoongi had. He was so confused to why they didn’t seem as happy as he was and quickly looked around for the person he was missing the most.

Jk- ha ha don’t joke around. Where is Jimin, Tae?

This time Jungkook said with a much severe tone. When Taehyung went to his knee was when Jungkook realised how things went.

Jungkook’s heart was aching. Wasn’t it the first time he actually lose someone dear to him? Wait what no Jimin can’t be gone? He just stood their without uttering a word, his mind was empty. He didn’t know what he was feeling. He said he was going to protect his dear people.

Yg- Jungkook he saved us all... without him we would have probably been all dead by now.

Yg- the lee and kim are allies now Jungkook. They attacked us the second we left the country. Jimin created a distraction for us to-

Suddenly Taehyung fell unconscious on the floor and Yoongi ran to him.

Yg- He needs medical help the sooner possible. He  was severely injured and couldn’t stop Jimin.

Some nurses came and took Taehyung away. Abruptly Jungkook started walking towards the door until Yoongi stopped him.

Yg- where do you think you are going? Jungkook i've known you from when you were still a baby, your big heart would make you lose.

He pushed Yoongi violently and the latter fell  down. Jungkook rushed out took a horse and left without anyone being able to stop him.

Lisa who saw everything in a corner started talking making yoongi turned his head to look at her.

Lisa- He is still young... too young for all of this...Don’t worry i will send some guards after him to protect him... me too i want Jimin back alive...

Yg- your highness... i will go with the guards... without Jungkook the kingdom is doomed.  No one will be able to save us all...

Lisa- please go... and no matter what happens protect Jungkook. He can’t die.

Jungkook arrived in the city of lees about 3 days later clearly he hadn’t stop at all. While walking he heard a group of people talking.

-That poor guy... we all know we shouldn’t go against the king...

Jk- umm I was gone for a while can you tell me what happened here? Why is everyone so distressed?

-Haha young boy you missed a lot.. well you know about that famous magician who has been conspiring against the king... well he was resently captured.

-and the king didn’t go easy on him... his body is hanging in front of the palace... you won’t even be able to recognise his face with all those blood.

-seemed like he was tortured.. this sick king did it all to show that no one can win against him.. becareful guys

They all started to disperse leaving Jungkook silent. It seemed like his world was turning around him. Slowly he turned towards the palace and started walking unconsciously.  He was in denial. Denying the fact that the magician they were talking about was Jimin. He slowly arrived there but couldn’t find the courage to look up at first. He breathed out and lifted his head up. There was definitely a man hanging with his face deformed and with bloody clothes. Still that didn’t convince him. He continued to stare at the hanging body until he found it. The chain that Jimin always wore. It was when his whole body started shacking.

There was a crowd of people still looking at the dead body with guards in front seemingly waiting for something. Jungkook’s legs went failed and he fell down. His hands covering his face. He was too late. Too late to save Jimin. He felt like he was going crazy. Just when he was about to shout and grabbed his sword someone from behind grabbed him and covered his mouth. He was pulled to the back far away preventing him from creating a chaos and dying along.

His tears were falling and he wanted to shout but the hand in front of his mouth was muffling all the sound. Once they arrived somewhere safe the man started to let go of Jungkook. Who turned to see who it was. It was yoongi.

Yg- Jungkook I'm sorry... that’s a sacrifice. You can’t let his death goes for nothing.
Jk- i... i will kill them all

Jungkook said with anger, he took his sword and started walking.

Yg- Jungkook be realistic.. you will just get killed. There’s a whole army right there.

Jk- what’s the point in living anymore. I don’t care. I don’t want to live without him.

That’s when Yoongi realised Jungkook’s actual feeling for Jimin. He knew this feeling way too well. He pulled Jungkook into a hug and caress his back.

Yg- Jungkook listen to me. Do it for him.. remember what he wanted the most. Make it become true... If you die, everything he has been working for would be for nothing

When Jungkook calmed down, both of them went away to Lisa Kingdom. Jungkook looking back promising that he would destroy them.