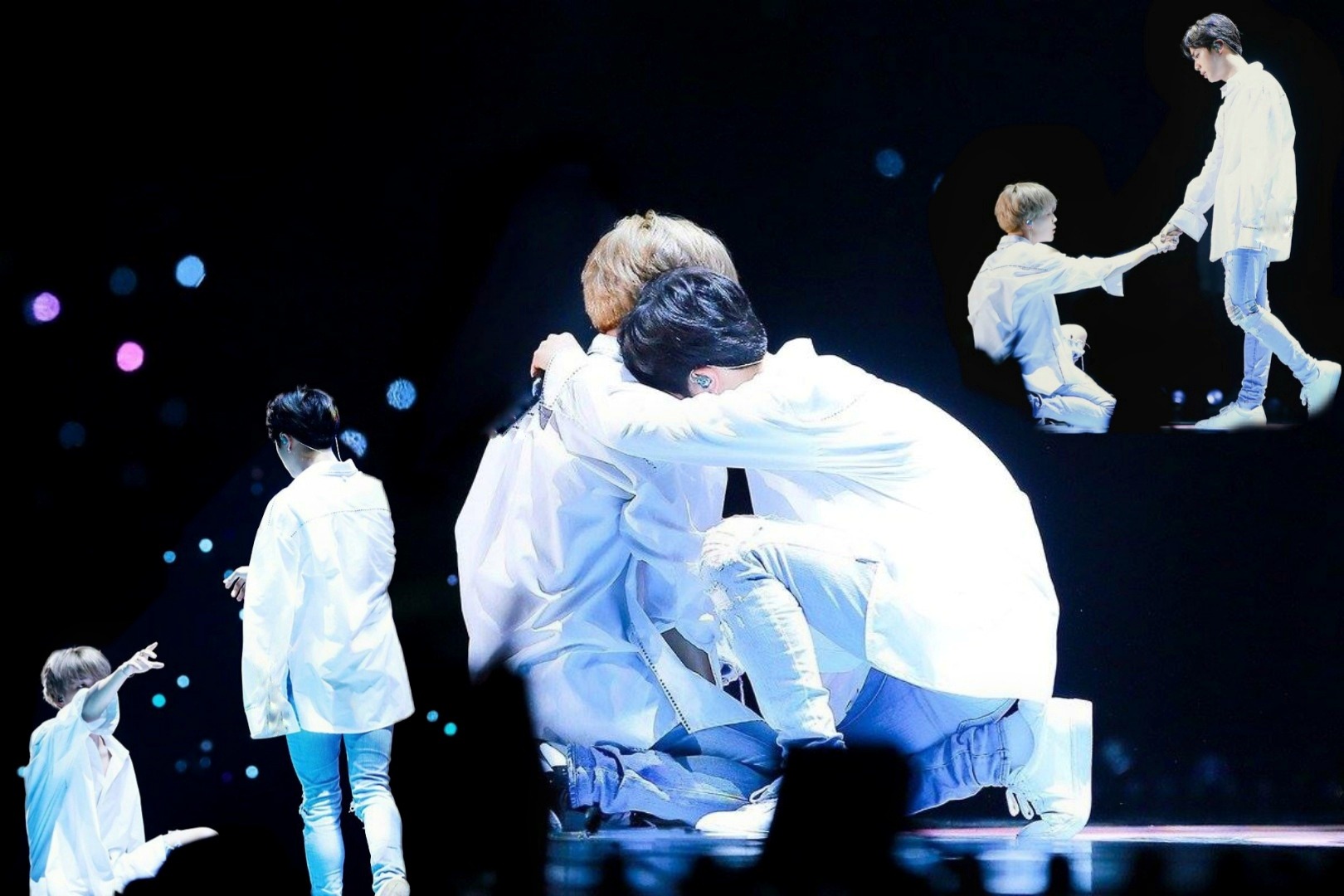 Fever? Me?... Ha, no wonder why I feel so weak after just curing that wound' Jimin said while noticing that he was not even able to stand on his own feet and if Jungkook wasn't holding him right now, he would have fallen to the ground by now. With much effort he lifted his head and glanced at Jungkook in the eyes. The anger was long gone and now there was an expression Jimin couldn't read. Suddenly he heard Taehyung voice but couldn't quite make out of what he was saying. Slowly his eyes felt too heavy to be kept open so he just dozed off.


Jungkook gently put him down and replied Tae.

Taehyung said while rushing towards them. He touched Jimin's head and quickly extracted his hand shocked.

Tae- that's not good Jungkook. He will die like this. Bring me warm cloth. I will see what- wait your hand?

Jk- there's no time for- urg he healed me... That probably worsen his situation.


Tae- what a complicated guy... Quicky brings me my bag. We need to make some soup he needs to eat something warm. He needs to stay warm. I have brought some herbs. Quickly.


Jungkook rapidly did as told. He was preparing the soup when Taehyung came to him and asked him to keep Jimin warm instead and that he will continue the soup and add some medicinal herbs together. Jungkook nodded and went toward Jimin. Jimin was now shacking and breathing heavily. Jungkook unconsciously reached out for Jimin and placed his head on his chest and hugged him trying to keep him warm as much as possible.

Jungkook tried shaking Jimin and calling out his name but Jimin just sinked further in Jungkook chest refusing to open his eyes.

Tae- wow ain't he enjoying it a bit too much? Yo Jimin WAKE THE UP.

Taehyung shouted and Jimin fluttered his eyes half opened.


Tae- eat this. It is hot. You will feel better soon.

Now was Jungkook's turn to break out.

Jimin pouted and just opened his mouth when Taehyung brought the wooden spoon next to his mouth. Soon enough the bowl went empty and both Tae and Jungkook were satisfied. Jimin was now breathing evenly in Jungkook's arm and dozed off.

Tae- we need to hurry up tomorrow Jungkook.

Jk- he will be okay?

Tae- for tonight but we need to bring him to a physician as soon as possible. Sleep. I will be on guard tonight.

Tae knew that Jungkook had a big heart. And that worries him. If something were to happen to Jimin he was sure Jungkook will blame himself. More even because he just healed him. Jungkook didn't move from where he was holding Jimin and he just closed his eyes there. Tae sighed getting a feeling that the night is going to be long. Some hours passed when suddenly Taehyung heard some noises coming towards them.

He glanced and Jungkook and noticed that he too had heard it and woke up. Jungkook started to move away and grabbed his sword causing Jimin too weakly wake up too. Taehyung indicated to both Jungkook and Jimin to be quiet. One of the horses neighed and fell down and that's when Jungkook and Taehyung realised that they were surrounded.

Tae- forest wolves... Why are they here? They shouldn't attack unless they feel threatened.


Jk- I can see what threatened them.

Jungkook said while looking at his sword which seemed to be emitting a dark aura. He quickly helped Jimin to stand up who was too high of fever to discern what was happening. While doing so he didn't notice a wolf who nearly jumped on them but Taehyung quickly stopped the wolf with his sword making the wolf fall far away. Now the whole pack started growling.

Tae- they started it

If Jimin was in his right mind, he would have thought what kind of dumbed headed would be joking in a situation like this. Jungkook quickly pushed Jimin to Tae.


Jk- protect him. I will take care of the rest.


Tae grabbed Jimin and did as told.

Tae- the alpha Jungkook. Once it dies they will all go away defeated.

Tae shouted looking around to search for the strongest looking wolf.

As if the Alpha heard Tae. A big wolf appeared in front of Jungkook challenging him. It didn't take long until the alpha got beaten and left defeated.

Tae- you didn't get rusty Jungkook.

Both looked at Jimin who seemed to be more conscious now but Jungkook stopped him from moving toward the black horse.

Jk- no you are not doing anything.

Jimin looked at Jungkook now with tears in his eyes rolling down his cheeks. Jungkook looked back shocked to see Jimin like this.

Jm- no nooo let me goo i can save him. Why why... Does it always end like this. Why

Jk- It died Jimin. It is already dead.

That's when Jimin stopped fighting back and stared down. His eyes were changing colour and was becoming red.

Hearing this voice everyone looked up.

Jungkook said with a severe tone. And the man went on one of his knee pledging his loyalty.

- Prince Jungkook. You've grown up a lot. Give me Jimin. He needs to come with me.


Jm- Jin Hyung... I couldn't protect him. It happened again. I am so hopeless. Just like Jihyun...

Jimin said while pushing Jungkook away and walking toward Jin but fell down seconds after. Jin stood up and started to walk toward Jimin who was reaching out for him.

Jin hugged him and a fog started to appear around them.

Jin said and they both disappeared. Tae looked at Jungkook who kept of staring where Jimin disappeared.

Tae- hey he will be fine.

Tae- that was one hella of a night.