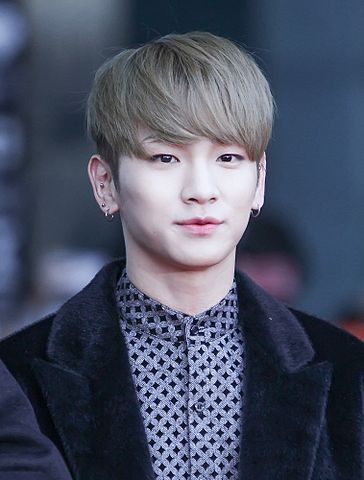 Kim Ki-bum (born September 23, 1991), better known by his stage name Key, is a South Korean singer, actor, fashion designer and television presenter. Born and raised in Daegu, South Korea, he later travelled to Seoul after a successful audition at the S.M. National Tour Audition Casting. In 2008, Key debuted as a member of South Korean boy group Shinee, who later went on to become one of the best-selling artists in Korea. Key is widely recognised as a singer, but he has also ventured into different careers, notably as an actor and fashion designer.

As a singer, he has done many collaborations with various artists, and debuted in the sub-unit Toheart with Woo-hyun of Infinite. Key has also contributed in writing songs that have been released in Shinee’ and Toheart’s albums. As an actor, he was cast in multiple musicals, such as Bonnie & Clyde (2013), Zorro (2014), and Chess (2015). He has since widened his field as an actor by taking part in several television drama roles, like Drinking Solo (2016) and The Guardians (2017).

In 2015, Key progressed to become a fashion designer and took part in numerous projects. For instance, collaborating with Bridge Shop House to design Shinee concert outfits, and worked with model Irene and the brand Charm's to design fashion apparels. Due to the successes of his works, Key was later appointed as fashion director of the group. In 2016, he became a model for the American fashion brand Jill Stuart.

Love Is So Nice

„We are afraid to take risks but sometimes, some risks are those which will change our life.” Taemin is a player and not believing in love as his relationships only last until he gets what he wants. Kai on the other hand gets a lot

She knows how to strain his patience to zero, then ease it back again. By demanding attention.

The Devil Besides Me

It's not everyday that Taemin summons a demon (Minho) by accident in his own bedroom, let alone a handsome one. He can't shake the demon off and he won't want to anytime soon. Not your typical demon summoning fic.

It’s a Halloween night just like any other, with parties and costumes and scary movies. Until things get weird and frightening.

The planet of Altin. A myth. A rumor. A story. A lie. Choi Minho had set out to prove it true. And perhaps more. But to make it happen, he needed one more person. As awkward as it was, his ex, Lee Taemin, was his best option. a/n

Written for Pearlesque_Stars fest flash fiction round Till 키-잉듬 Come based on the Gasoline MV! Crossposting from ao3

Devotion: noun  love, loyalty, or enthusiasm for a person, activity, or cause. *One Shot Collection*

The same kind of day he would wake up to everyday, though he was happy, with his friends around to share his happiness, his fans being his source of motivation every morning, and his family being his biggest strength, he was a happy man. Not that he was lacking anything right now, being singer became his dream and since 15 years, he was living this dream together through SHINee, For her, every day there would be a new challenge dancing on her head, when she had the responsibility of b

When The Stars Don't Always Aline

Kibum found himself ready to move on from his past relationship.

Come Back To Us

Taeyeon didn't know that her accidental encounter with the man could lead to something that later she would called love.

#01 Did This Really Happen?

After a car accident during their promotion, Jungkook and Taehyung have to recover in a rehab center.  Two strangers show up and Taehyung learns about his dark side. But this side is dangerous, and the two stumble right into a war between the clans...

Hello and welcome to the very first writing contest I have ever hosted! The contest is made in hopes to bring a lot of talents together and support authors as they are the reason why we all are here on Asianfanfics. I have also created it in hopes to better myself as a reviewer as I will be writing review for each of the finished entry! I am currently looking for promoters who can spread the word, an editor to pick a layout for this contest, and anyone who can par

Taemin did something that he shouldn't have done. It was an accident before it was guilt, and he soon finds himself ruining the little happiness that he had. Adreanne basked upon the freedom that she has made for herself, to the point that she forgot about her life as Taemin's docile wife-

Colors of our beautiful love

Heechul and Taemin have been together since their college's years. But their love was slowly getting down. They didn't feel what they did before. As they spent more days together, more nights together, they feel like their lovely energy is running away. And because of it they decide to visit the doctor who has for them a solution. At first they thought it is weird a solution. But when they meet Jonghyun, they can feel something different.

sorry souls of those

Jinki hums, amused. Perhaps if Kibum wasn’t so Kibum, the concept of an ethereal being seeing every notch and curve of his soul would bother him. But at this point, it’s hard to feel anything they say as a threat. man falls in love with an angel. except, the angel part? not so much.

What Is She Doing? [mystery/thriller]

In which, Kim Kibum starts to sense that something is not right with his wife, who disappears at night without leaving a trace

minho can't help it- he is absolutely smitten by his best friend's hairstylist, lee taemin.

A collection of SHINee one-shots with all ships. ♡

YOU FEEL THE SAME ?

'The right person will never get tired of you. Even after 10 years, even after 100 years of being together.'

If Love Is Your Hunger, Eat Me

SHINee One Shots and Drabbles

A series of one-shots I have written throughout the years. They range from PG to MA. Some of them have a lose plot, while some are completely random. The mature chapters will be marked.

When I Met You (HIATUS)

Tales Of The Red Planet (Tome 1)

Kibum loves modelling. He doesn't mind posing in front of the camera, but Jonghyun is a bit picky. He hates it when people get touchy.

Be my light in the dark

Jinki gasped slightly in surprise and bit his lip. He had the idea that this wasn‘t so… maybe he knew the truth. He wanted to find out more, even though all the events... everything that happened in front of his eyes in the last hours... Blonde painter was a mystery to him. He came to him and settled down beside him on the bench when he didn’t speak any word.

❝ He was handsome, like he was sculpted by angels.  But the darkness in his eyes felt like I was talking to the Devil himself. ❞       .....

When a young woman is murdered for no apparent reason (no enemies, no large sums of money or insurance, etc.), it is up to detectives Kibum and Taemin to find the murderer. Going through various clues and notes left by the victim, Kibum and his partner find probable cause for her death - but when the killer turns out to be someone the police squad is familar with, will they be able to put their emotions aside and their