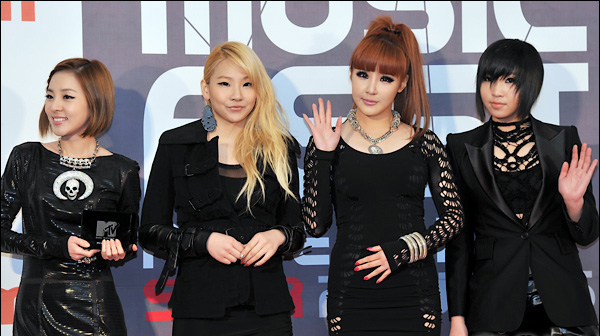 2NE1 (Korean: 투애니원, IPA: [tʰu.ɛ.ni.wʌn]) was a South Korean girl group composed of Bom, Dara, CL, and Minzy, formed by YG Entertainment in 2009. After appearing alongside boy band Big Bang in the song "Lollipop", a promotional single for LG Electronics, the group rose to fame with the release of their two eponymous extended plays, 2NE1 (2009) and 2NE1 (2011), and two studio albums, To Anyone (2010) and Crush (2014). All peaked at the number one position on the Gaon Album Chart. They also scored nine number one hits on the Gaon Digital Chart, with "Try to Follow Me", "Go Away", "Lonely", "I Am the Best", "Ugly", "I Love You", "Falling in Love", "Missing You", and "Come Back Home".

The quartet simultaneously conducted a similarly successful career in Japan, releasing first a Japanese version of their second EP, Nolza (2011) and following up with the studio albums Collection (2012) and Crush (2014). Following a long-term hiatus, Minzy departed the group in April 2016, while the rest of the group disbanded later that November. Though CL and Dara remain signed to YG Entertainment, Bom's contract was not renewed. Their final single "Good Bye" was released on January 21, 2017.

If he knew what he was doing then Eun Jiwon was a cruel, cruel man. How could he do that and not expect her to fall deeper for him? What else was Dara supposed to do? A.K.A: The Dara Jiwon timeline, pieced together and dramatized by yours truly.

Dara is no stranger to other’s attention. Her romantic self is lost after the umpteenth empty relationship with another wolf who preyed on her innocence, causing her to push everyone away. Her monotone life gets turned around when she confesses her 20-year long crush for SECHSKIES’ leader, Eun Jiwon, on National TV. She laughs it off as if it were only a childish crush, as if she didn’t actually find comfort and str

Fate That Bring Up Their Encounter

The girl who is bury her feelings for the guy she loved because of her own personal reason and the guy that still wavering and questioning himself whether his feeling towards her is genuine or not and decided to keep distance with her until he sure with it. They still maintain their friendship and just meet with each other for some occasion. As time passed by their fate seems to change its direction when there was another guy that comes into her life coincidentally and happen to have a simila

The Chronicles Of Soshi: Odyssey Of A Consortium

YG enterntainment was not happy on how things are turning out for Blackpink in Korea. Their solution, add another member. An additional member to fill in the gaps. They needed someone who can produce songs and who is equally talented. Someone who can relate the group back to the legends. And they discovered Choi Soohyun. A highly graded YG trainee who has a potential of producing great songs. However, What secrets will she discover? Will she be accepted by the public and by the group?

Does he has the second chance to loving dan to be loved ? Will this relationship have a happy ending ? Eun Ji Won, 44 years old, an all around entertainer in South Korea, once had a marriage and ending with divorce. He never think to have a serious relationship again. He loss the confident about love. But, once he met her, Sandara Park, he has this feeling again. Love... Sandara Park, one of the goddest beauty in South Korea, have a crush to him for

His and Her Rules

Lee Minho is a world renowned heir to the Lee Corporation, which holds massive 5 Stars Hotels and Restaurants. They also owned the most extravagant land located in Jeju, Busan, and Seoul. Their Net Worth is considered to be $5 million. Aside from being born rich,he is also inteliggent with a masters degree from Harvard and Oxford. With his handsome features: Face symmetrical, bow-shape

Sandara Park has been on the run for the last three years after her parents were brutally murdered. She decided from then to only rely on herself as she traveled from town to town, hiding her identity. After settling into a town while on the road, trouble unfortuantely runs into Dara as she is cornered in alleyway by a man. Just as she thinks she is about to die, th

All the watersports fun

“Are you sure you’ll do anything?” Lee Seunggi eyed her with a challenging voice. “As in anything?”   “Yes.” She is Sandara Park, a woman who dreams to be accepted in the most prestigious baking school in France, will do just anything and everything to get it. “So, what do you want me to do then?”   “Turn my brother into a man.”

Not far from the Incheon International Airport is a building where engineers, kitchen staff, and landscapers all interact. One topic that always is brought up is everyone's dating life. As a woman in her late 20's, who has a great career and close friends to rely on, will Joohyun ever find her perfect match? Most of the staff in the kitchen and all throughout the airport seem to be dating each other but Joohyun wants someone new. Will a suggestion to try a dating app that connects to potentia

"Take responsibility." Park Hyun-Sung cries, "Say what you did to my daughter. In front of your wife and father, I want to hear you say the truth – just once." I can feel the room tightening like a noose around my neck, and it's all this girl's fault. I have never seen this girl before. But, then, out the corner of my eye, I see Chaerin; for one moment, she has a look of horror at the accusa

"I know you didn't disappear for the reason everyone thinks you did, you saw something, didn't you?" - SONG MINHO

This story is about Transman and stuffs. Chaerin will become a transman because she doesn't feel comfortable in her own body although she already have the ability to make a girl

Sleeping With the Idol

Finding a mate meant finding your happily ever after in the lycan world. Wasn't that how it was supposed to be? But as fate would have it, it would be much more complicated for Minzy as she experiences the beginning of the end.     (I started this story on wattpad with origninal characters. It was called Undone but I only posted like two chapters and scrapped the idea seeing as it was just a struggle bus for me like many ideas as you can see with how many unfinished fi

If You Were Me

Even if I have a Mental Breakdown, I will force you to love me and charm you with my charisma.

Some would say they want a fairytale life, a life out of the typical ordinary. Well, Sandara Park would love to trade her life up with yours. Living in a gothic Victorian mansion, Sandara Park is the orphaned mistress of the castle who is mistreated by her evil stepmother. A story of a modern-day Cinderella, this tells the tale of  her struggle for

"But I'm human and it's not possible to always be happy"   Following the sudden death of her absent father Bom finds herself as the legal guardian of his other daughter- a fifteen year old half-sister that up until now, Bom didn't even know she had. // Butterflybommie// © 2016-17 all rights reserve

From Dragons to Unicorns

Can you really sacrifice everything for the one you Love? Even if it means letting them go forever?

Two idols had been dating each other secretly for quite some time now, but another obstacle came to their life. A malicious photo between the guy's best friend and his long-term girlfriend has been leaked by Dispatch, and now, numerous rumors are surfacing. There have been a lot of positive and negative comments regarding the issue as well. How will they overcome this issue? Will it end their relationship, or will it make them stronger?

Mito and Ian are the two sides of the moon. Like the moon, Ian/Mito are different faces of the same person. Without one, the other would cease to exist. For some time, Ian manages to keep Mito behind closed doors, suppressing him the best he could. Chae is back in South Korea to finally claim what's rightfully hers. Fame. Recognition. Freedom. Love. She's the key that could free Mito, the cold and selfish bastard with no r

Taeil is a music major at the National College. His friends always tell him that he doesn't care about romance, and they’re right. It’s just too hard to get in his heart. His only requirement when it comes to love?

Contentment is what Lee Donghae found in being a zookeeper in Mokpo. But what happens when a mysterious woman appeared one night and lured him to Seoul, revealing that he was the head honcho of the biggest mafia group in Asia? The Lost Anima.

the story was inspired by 2NE1's newest album CRUSH, just like the album it self. 9 songs in it, i am planning  on making 9 different stories about every title which would be oneshot per chapter. 1. Good to You (착한 여자) 2. If I were You (살아 봤으면 해) 3. Come Back Home

Breakups are difficult and neither member ever leaves unscathed. Follow Jiyong and Chaerin as they navigate the overwhelmingly confusing feelings involved, as well as the pain, regret, and guilt of their separation. After all, a clean break is never as easy as it seems, especially when forever was once promised.