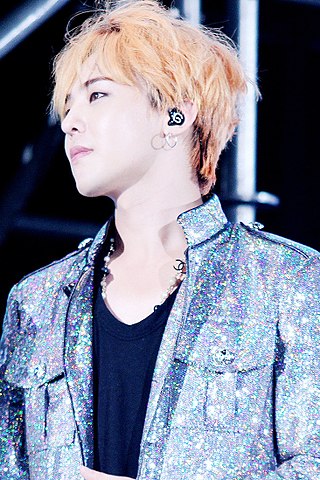 Kwon Ji-yong (Hangul: 권지용; born August 18, 1988), also known by his stage name G-Dragon is a South Korean rapper, singer-songwriter, record producer, entrepreneur, and fashion icon. He is known for penning chart-topping singles and his stage presence that has garnered him the title "King of K-pop". From age twelve, G-Dragon trained for six years at South Korean entertainment label YG Entertainment before debuting in 2006 as a member of the hip hop boy band Big Bang, which went on to become one of the best-selling boy bands in the world.

His first solo album Heartbreaker and its title track, both released in 2009, were commercially successful and earned him Album of the Year at the 2009 Mnet Asian Music Awards. G-Dragon collaborated with Big Bang bandmate T.O.P to release the album GD & TOP in 2010. His first EP One of a Kind (2012), was critically acclaimed and yielded three singles: "One of a Kind", "Crayon", and the chart-topper "That XX". The EP became the best-selling album by a Korean soloist, breaking his previous record with Heartbreaker, and earned Record of the Year at the 2013 Seoul Music Awards. In 2013, he embarked on his first worldwide tour as a solo artist, making him the first Korean soloist to tour Japanese dome arenas. G-Dragon was awarded Artist of the Year at the 2013 Mnet Asian Music Awards following the success of his second album Coup d'Etat (2013). His 2017 EP, Kwon Ji Yong, yielded the number one single "Untitled, 2014", and the supporting concert tour Act III: M.O.T.T.E became the largest tour ever conducted by a Korean soloist.

Widely recognized for his influence on youth culture, fashion trends, and music in South Korea, G-Dragon was named by Forbes in 2016 as the most influential person under 30 in Asia's entertainment and sports. Producing not only for his band but also for his and his bandmates' solo releases, G-Dragon has written or co-written 23 number one songs on the Gaon Digital Chart (equivalent to the Billboard Hot 100), most of which he has also co-produced.

Meet Greyson King Lazaro, the most popular boy in the university. He is extremely handsome. He is talented beyond belief. He is someone that everyone admires. He is the KING of Campus. He has it all... Or does he? DaraGon.

If you love someone, set them free. If they come back, they're yours; if they don't, they never were.

From Dragons to Unicorns

A Dog and a Shower

Breakups are difficult and neither member ever leaves unscathed. Follow Jiyong and Chaerin as they navigate the overwhelmingly confusing feelings involved, as well as the pain, regret, and guilt of their separation. After all, a clean break is never as easy as it seems, especially when forever was once promised.

Their love would be the start of all other love stories in our history. For they loved, hated, and yearned for each other like no other. A Vampire King who loved his human so desperately and so passionately, they would become the very embodiment o

You know how the song goes... "Breaking up is hard to do."? Yeah, break-up butts. And with that, comes my collection of GTOP angsty/bittersweet one-shots. I'm so sorry in advance. All stories are stand-alone and can be read in no particular order unless stated otherwise. Some are au, some are canon. When you stumble upon this, please give it a chance? 🙏 Comments and suggestions a

Remember You, Remember Us

Character(s): Lee Seunghyun Kwon Jiyong Park Sandara Lee Chaerin Genre(s): angst, family, romance Summary: Being in the marriage for almost twelve years and haven’t gotten the heir, the current Lee family’s leader - Lee Hyunsuk - decided to bring back home a little boy and made him as Lee’s oldest son. Lee Hyunsuk and his wife raised the little boy whom got the name Lee

GDxOC "THE KING OF KPOP WILL MARRIED" "G-DRAGON WILL MARRY" "BIG BANG LEADER MARRIED" "WHO IS G-DRAGON'S FUTURE WIFE?" "WHO THE WOMAN GETS G-DRAGON'S HEART" "PREGNANT,G-DRAGON MARRYING HIS GIRLFRIEND"

To Lay Myself At Your Feet

"I know you didn't disappear for the reason everyone thinks you did, you saw something, didn't you?" - SONG MINHO

"You tried very hard to be a part of the group, but you'll always lag behind. Now what does that tell you?" Loneliness can bring a strong man to its knees. When the Seungri was left alone in the cruel world of celebrity and jealousy, he was into an abusive relationship.

Hi! This is a part of an original series of mine from Wattpad with 13 different stories. I am only writing this one, Jiyong and Dara's story. Hope you'll like it!

Of Moments and Memories

G-Dragon and Taeyeon to the world. Kwon Jiyong and Kim Taeyeon to each other. To the world, they are both legendary celebrities— leading also legendary groups. To each other, they are ordinary person that influenced each other. The world may be in denial of the possibilities of G-Dragon and Taeyeon. But together, Kwon Jiyong and Kim Taeyeon gave it a shot for love made of moments and memories.

Just when the fans become really suspicious regarding their relationship with other people, the mighty G-Dragon makes an appearance on Amazing Saturday, which has Taeyeon as a permanent member. Remember the old-time rumours?   Once the preview is released, the netizens went wild. They even sat next to each other! There's still an excuse. It's the crew that set the stage. There will be no more question asked, right?   You wish.   More questions w

Protecting You With My Powers

We, ourselves and us

It is 2021; what happens if kpop superstars G-Dragon and CL act in a K-drama together? Will Jiyong remain professional, or will his feelings get him caught up in the way and distort his relationship with Dara? Read this to check what happens in their busy lives!     Kwon Jiyong Pretending to be fine has become part of his li

Taeyeon looked down to Jiyong’s shirt and sighed, “Oh, thank God.” Taeyeon moved out of the bed pulling the strap of her bra up onto her shoulder. “For a second there I thought we, you know-.” She ended her sentence with a soft laugh and then held her head as she stood up. “Whew,” Taeyeon began pulling on her things from the night before.

The part where two past lovers meet again.

Nature is about balance. All the world comes in pairs - right and wrong, men and women; what's pleasure without pain? This story is exactly talking about how the Yin and Yang would balance each other.