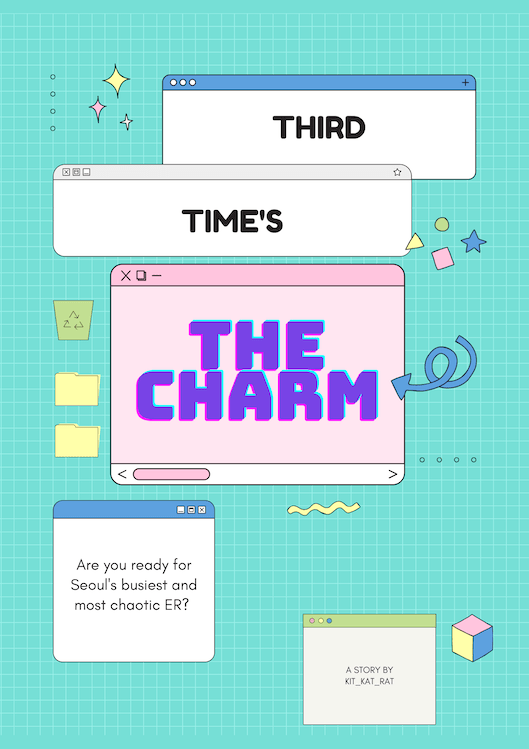 During their first encounter, she witnessed the last bottle of her favourite plum flavoured soju being snatched from right under her nose. Their second encounter entailed her showcasing the verbal elegance of a drunken sailor because he was simply at the wrong place at the wrong time. As for their next encounter… Well according to the stuff of fairy tales and rom-coms, third time’s the charm right?

Strap your seat belt because we are in for a ride as we dive head on into the chaotic world of Seoul's busiest ER with the hurry and scurry of overworked staff members; the yelling and screeching of impatient patients; the silent curses and suffocated sighs of those who would much rather be elsewhere.

In this ER we will meet a nurse who is done with incompetent doctors; a doctor who is completely out of his depth; a cop who questions how he ended up there; and another nurse who is simply there to savour the free entertainment.

“We live in a rainbow of chaos.”

Hello peeps~ After a long long loooooooong break I am back! Well kind of. I started a new job back in September so life was rather chaotic and all over the place as I adjusted to the new schedule and inhumane long commute. Now I finally got some inspiration so I decided to get this posted ASAP. I figured if I have the foreword published it will actually force me to be committed to writing this story until the very end so wish me luck.

This time I am back with hospital setting with Sehun, Jongin and Kyungsoo as part of central cast. Just disclaimer, I am personally more familiar with UK healthcare system but I have attempted to match as much of what I am writing to South Korea's hospital system (by force of habit I kept typing A&E and then I started questioning myself on whether this is term used outside of the UK at all? Then the one brain cell left in my body remembered that ER is the term more commonly used in dramas so I opted for that as it may be more familiar).

Having said that, I will be taking some liberties as part of what I want to explore in this story is theme of mental health in emergency setting, specifically in relation to addictions and again, I am more familiar with UK system. Topics such as alcohol and illicit substance addiciton will be mentioned but I do want to keep this story relatively light so if there will be any triggering topics, I will put up a warning in the beginning of the chapter.

Finally, like with my previous stories, there will be hints of romance in this story but will it be a fun and chill love story or a torturous slow-burn? That will depend on how sadistic I feel so prepare yourselves my dearest readers XD