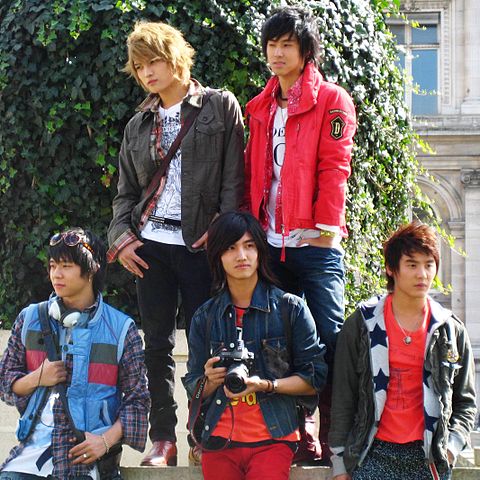 TVXQ (stylized as TVXQ!), an initialism for Tong Vfang Xien Qi (Chinese: 東方神起), is a South Korean pop duo consisting of U-Know Yunho and Max Changmin. They are known as Tohoshinki (東方神起, Tōhōshinki) in Japanese releases, and are sometimes referred to as DBSK, an abbreviation of their Korean name Dong Bang Shin Ki (Hangul: 동방신기). Their name roughly translates to "Rising Gods of the East".

Formed by S.M. Entertainment in 2003, TVXQ began as a five-member boy band composed of members U-Know Yunho, Max Changmin, Hero Jaejoong, Micky Yoochun, and Xiah Junsu. They were immediately launched to mainstream recognition following the release of their first physical single "Hug" (2004), which peaked at number four on the MIAK monthly music chart. Their first studio albums Tri-Angle (2004) and Rising Sun (2005) were both top sellers, pushing the band's popularity beyond Korea. Under Avex, TVXQ entered the Japanese market with their first Japanese album Heart, Mind and Soul (2006), but it was met with limited success.

TVXQ rose to international prominence in the late 2000s, after the group achieved critical acclaim in the Korean music industry for their best-selling albums "O"-Jung.Ban.Hap. (2006) and Mirotic (2008), both winning the Golden Disk Award for Album of the Year. The latter album also contains the pop hit "Mirotic", touted by international music critics as a staple song of K-pop. With four chart-topping singles, TVXQ gained widespread media attention in Japan following the release of their fourth Japanese album The Secret Code (2009). However, despite their commercial success, the group plunged into legal turmoil and internal conflict when members Jaejoong, Yoochun, and Junsu attempted to split from their Korean agency S.M. Entertainment. Prior to the trio's departure in 2010, TVXQ released their last Japanese album as a quintet, Best Selection 2010, which became the group's first album to top the Oricon Albums Chart. The album spawned two platinum-selling singles, including the long-running hit "Share the World".

After a year-long hiatus, TVXQ returned as a duo with remaining members Yunho and Changmin. They released TVXQ's fifth Korean album Keep Your Head Down (2011), topping album charts in most major Asian markets upon release. Their first two Japanese albums as a duo, Tone (2011) and Time (2013), solidified their success in Japan as it forged TVXQ's reputation as one of the top-touring artists in the country. Their eighth Japanese album With (2014) made TVXQ the first and only foreign music act in Japan to have four number-one albums in a row.

Selling over 14 million physical records in the first 10 years of their career, TVXQ have become one of Asia's most successful music acts of their generation. They are often referred to as "Asia's Stars" and the "Kings of K-pop" for their immense success and contributions to the Hallyu. According to the Oricon, TVXQ have the most number-one singles for a foreign artist, and is Japan's best-selling foreign music act in CD singles of all time. Their Time Tour, one of the highest-grossing concert tours of 2013, is the highest-attended concert tour held by a foreign music act in Japan. With the tour, the duo became the first non-Japanese Asian artists to headline a nationwide five-Dome tour, and were the first foreign artists to perform in the Nissan Stadium. Billboard has described the group as "K-pop royalty".

Extroverted CEO; and heir of JK Holdings INC.; Jung Yunho lives an opulent life, as one of the most admired members of Seoul’s business elite. Respected around the world, he is known for his tenacity in business, his talent for turning a phrase, his charming and charismatic good looks, and his ability to get things done no matter the cost.

Oppa was a Star?

The Summer that Never Ends

The Walk Back Home

Thorned Roses Under the Moonlight Shade

Oneshots from random bands and pairings.

The Arc of Time (Always Bends Toward You)

When Jaejoong comes back to 2003

Jaejoong found out that Yunho and Changmin renew their contracts in SMent. AN accident happenned,. When he woke up, he was an ordinary boy again. He is back in 2003.               I at titles so yeah haha~Some parts of the story are based in true story while some are not. English is not my mother language so sorry for some (or many) grammar mistakes. For SMent lovers, sorry for using SM as

This is the 76th Hunger Games - two notches more brutal than the Quarter Quell.   After the second rebellion, the Districts have triumphed. The Capitol, now in shatters after the death of President Snow, surrenders to the Distr

A story about fate dragging two unlikely people into each other's lives.A fervent fire prince and a young steadfast farmer's son of a small kingdom It's not until they accept their feelings for each other when their fates become twisted into a reality full of trials and tribulations. There's no one they can trust but themselves, on their lonely path towards love.

The Truth of Love

The love I cherished

Genre: Romance, Fluff, Slight-Angst… Length: Three-shot Warning: Contains BL. I don't own anything apart from the storyline, and all the content is just a fiction.  Summary:   ‘I had no idea how cherished I had been, until I found you…’ Jaejoong had be

It Happened By Chance

The Chance of Love

I was just a teenager who had his first near heat that happened at school. I was naive back then, thinking that his own best friend would protect him. However, he is just an omega, and his best friend is an alpha, and what worse is both of them don’t have mate yet. I tried to shout at him to bring him back, but I saw that eyes and the pheromones

Do I know you?

Changmin accidentally hit on a link which access him to YunJae chat history.. and the biggest secret’s gonna be revealed.. Why did Junsu Yoochan and Jaejoong leave the SM En..???

WHAT I CAN DO FOR LOVE ( LOCKED)

With the disbandment of TVXQ and the hostile practices of SM entertainment has made JYJ members redundant. While Yoochan and Junsu tried so hard to get back in the industry by performing in dramas and musical. Jaejoong drowned himself in alcohol and sorrow. And in this period, he decide to join a small radio show as a host, unable to use his real name due to SM, he engage with this small private radio station with th

YOU SPIN ME ROUND

The Daily Life of The Jung Family

This is the daily life of a normal, disfunctional family of five. There is plenty of fighting amongst siblings and of course how could we forget for the last crumb on the table! This story is going to be like in little episodes where each family member gets to be the main character of their own story and w

being betray by his own boyfriend kwon ji yong a.k.a gdragon,sandara park have no choice but to grab any guy to marry her.she badly need to plead her own father so she can be with 2ne1.she just grab the guy to be her man.   "please marry me"     "on one condition,you are my servant"     "alright,kim jae joong,please marry me"     being able to treat her as a laughing stock probably his ideabut when both of them trap

This is my one shot dumping ground! It's a collection that has several different groups, so you might find something you like!

Only God knows why she ended up as Shim Changmin's personal maid...

In Case of Rain

Love is in the people – if you look close enough.

"Yunho has this strange habit of losing and picking things up.  You all have lost count of how many things he has forgotten in dance rooms, backstage

Hidden Under the Depths

Changmin has a secret.

東方神起's The Chance of Love

Chaebols have highly coveted lifestyles and look to have it all. However their main duty to their families is to make a beneficial and honorable match when they reach the marrying age. Whom they marry determines their continual status and the prosperity of their family's legacy. It is not a matter to be taken lightly. Oftentimes to ensure the best possible match for their offspring, chaebol families arrange marriages for them at young ages. These "contract marriage

Yunho and Jaejoong have been happily married for 5 years. Jaejoong mostly stays at home while yunho leaves frequently to go to work. No matter how busy and stressed yunho might be, he always greets his husband with a loving smile. Jaejoong cares for his husband, making sure yunho feels comfortable before and after going to work.

The setting is in a university. It's about a girl, matched with a boy by her friend~ A nerd and a popular guy~

This is a story inspired by Dong Bang Shin Ki's song, 'My Little Princess'. I started writing this story 2 years ago but was very busy so it was not pushed through. The story behind this was conceptualized around 10 years ago as I visualized Yunho being the main character ^^ But then, I am a current BTS fan so I could visualize RM as the main guy character as well ^^ (Yunho/RM) I changed the main characters' name to Gale, by the way.

Don’t Hide Me from the World