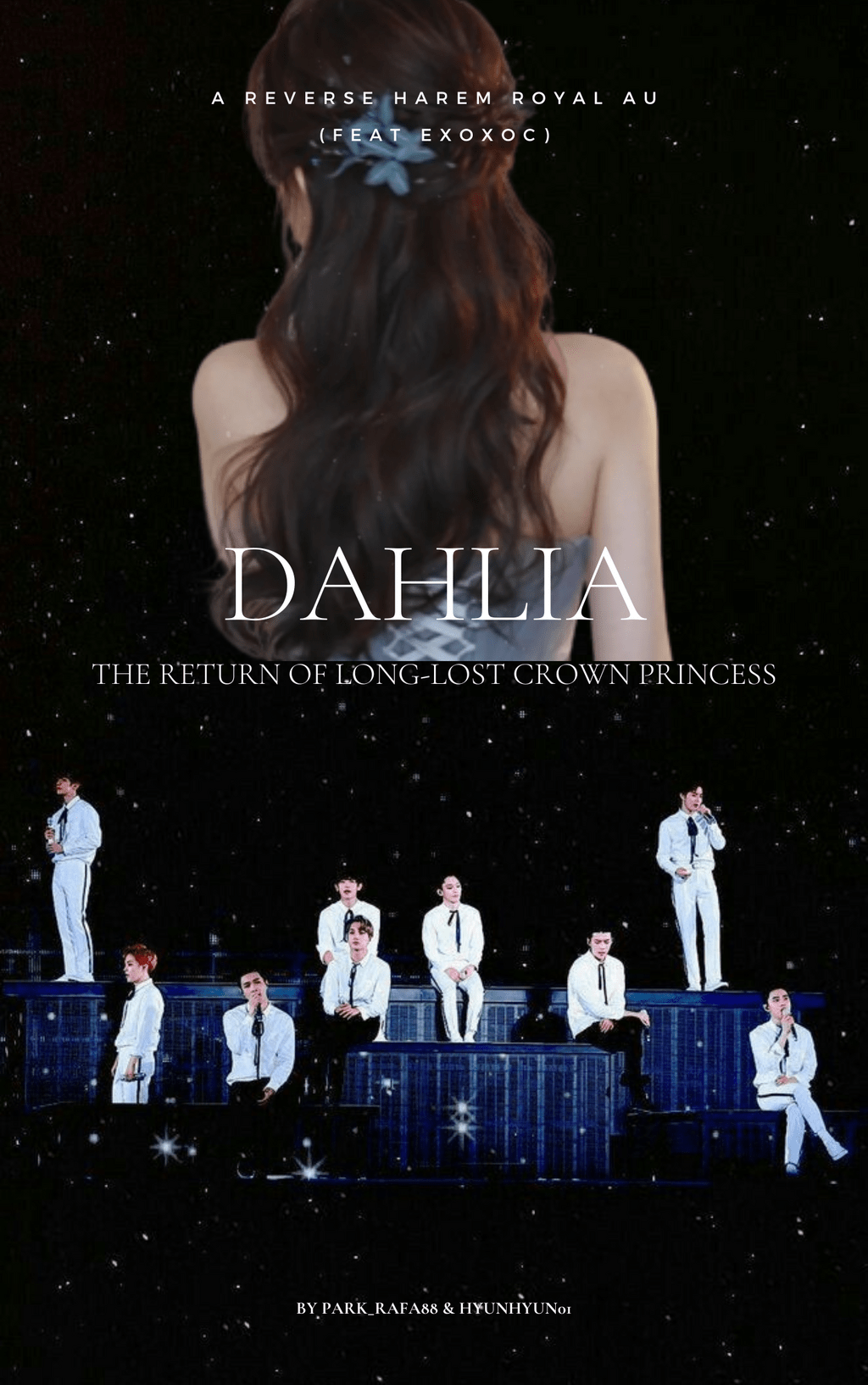 The long lost crown princess is now back as the news spread about nine prince of EXO Kingdom is bound to her and she is back to take what is rightfully hers.

Don’t trust, Dahlia. She is dangerous.

No matter what they say…

Cause she is Dahlia.

Dahlia: the dangerous long lost crown princess of Ardel kingdom. Rumours has it that she actually dead in the cold season when she was a young girl however it remains mystery. She comes back as she is now demanding the throne and her so called fiancée, the nine prince from EXO kingdom.

“I’m taking back what is mine and I don’t care what you going to think about me because basically that young naive Dahlia is dead long time ago… when you kill her.”

EXO: Minseok, Suho, Yixing, Baekhyun, Jongdae, Chanyeol, Kyungsoo, Kai and Sehun. Nine dreamy and charming princes from EXO kingdom however unlike the facade and public image they wore, there's a darker side of the royal princes. The boys are shocked to learn about Dahlia return to Ardel and they are not going to surrender to the Princess's demand for their reunification.

“No one going to mention her name. That dangerous princess will never get what she wants even if she dead again.”

Winter: Dahlia’s best friend also her personal advisor who helps her in her ruling over Ardel. Winter knows Dahlia the best and the one as middle person for Dahlia and EXO prince. She believes the boys are nasty despite the polite and charismatic image the public said about them and was showcase to her.

“Put yourself first. They aren’t worth like what you aiming for, Dahlia. I’m sure they have 1001 tricks under that cranky brains of so called EXO angel. More like devils in disguise.”

Doyoung: EXO’s personal advisor who actually younger than the princes however his IQ was beyond average. He is the one who delivering Dahlia’s return news to the prince and was the King’s right-hand man. He unconsciously taking care of the princes despite the dark side that no one knows about the prince.

“The return of Ardel crown princess is going to be a mess but she isn’t going to go down too. I’m going to help the hyungs. Like how they help me before.”

I'm back with another wishlist fanfiction of mine. I like to read reverse-harem genre alot in fact it takes like 70% of my reading list here. However so many of my favorite story are no longer written or updated for long time. I wanting to write one for so long and I get the ideas now. I have the plots, story and scene in mind for a longtime. Thus I hope you guys will love my very 1st attempt to make it as a public story!

Also you may see different kind of writing since I'm doing this with my fellow co-author thus hope you can enjoy the colors in the story!

RULES/WARNING WHILE YOU ARE HERE AND WANT TO READ :

1. The plot will be a bit heavy & angsty however I will try my best to make it easy to understand and simple.

2. Please stop reading if you are uncomfortable with multiple partner and the bad side of EXO boys also slow update as I am also working with other stories at the same time. The story will be involving curse words, maybe some bloodshed too and other dark word plus light mention of however I will tag it rated M or triggered warning on the chapters involved later on.

3. Any scene that familiar or similar are coincidential and inspiration based only. For characters, I don't own them thus the charateristics in the story are not reflecting them in real life also the songs that will be mentioned are also own by their original singer and producer.

4.Strictly no plagarism and re-post without my permission.

If you are bored, do visit my other stories:

Into Your World (Sehun centered)

Please subscribes, upvote and leave comments for each chapters and update <3 Lastly, have fun with Dahlia and EXO boys!

Next Chapter →
Author's Thoughts
31/12 - We reach 60 subbies! Dahlia is receiving so much loveeee~ We will work harder for upcoming update! Thank you <3
Read More →
Back to Top ↑
No comments yet
Back to Top ↑
Table of Contents
Foreword
Back to Top ↑
Community Promoted