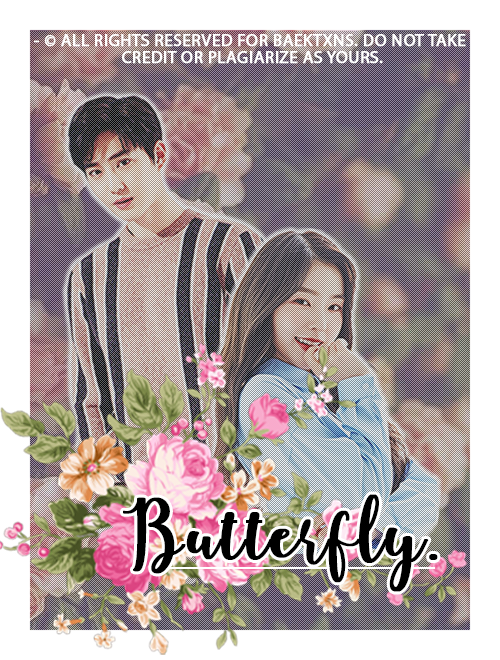 “So,” Chanyeol called out, plopping down beside his son. “Jaeseok has swimming classes tomorrow, and I was wondering if you can take him.” Nami blinked, turning her head to away from her nephew. “Why can’t you take him?”  She asked, and her older brother sighed. He knew the question would come, but at the end of the day—he knew that she’d take her nephew anyway. She’d do anything for him and Jaeseok. “I have to be in the office on weekends now. I want to push this project forward and get the construction work going, so I won’t have time to go and chaperone.”

Nami squinted her eyes, frowning at her brother’s words. She didn’t really mind taking him—she didn’t work weekends anyway. “I mean, that’s fine with me, but why are you pushing the project now? I thought the house isn’t supposed to start construction for another four months or so.”  She mentioned, still frowning. Chanyeol sighed with a nod: “Yeah, but I really want it done. The sketch and blueprints are done, the location is settled, I want it started now.” Nami could understand that he was an architect, and that he was using his authority to build a new house a bit closer to her. So, it was convenient for all of them to stay close together in proximity. He said it was, at least, she found someone of her own that living close to each other served a purpose.

“Okay,” she said, a sigh of defeat leaving her. “Leave him here on weekends, it’s fine. Just do what you’ve got to do.” Chanyeol let out a sigh of relief as he thanked her from the bottom of his heart. “So,” he called out, getting up to reach into his satchel, “here’s the papers and stuff for his swim classes. It’s every Saturday for an hour or two for four months.” He plopped back down, while holding the folder to Nami. She looked at him, taking the papers from him. She skimmed through it quietly, seeing that it was his registration papers, the time and the amount per class.

“I’ve talked to Sehun, and he’s agreed to take him if you’re ever busy with work. He said he’d work around his PT client list and his date nights for you.” Nami nodded her head, putting the papers away. “I think he’ll be there tomorrow. I think Jaeseok would be comfort with you and his uncle there.” Jaeseok turned his attention away from his toys, a grin now on his lips as he turned to his dad and aunt. “I like Uncle Sehunnie!” He called out, and Chanyeol gave his son a playful look: “No, you only like Uncle Sehun because he gives you ice cream.” But his son frowned and shook his head vigorously. “Noo, I like him because he’s Uncle Sehun!”

“Really? Because if auntie remembers right… Uncle Sehun doesn’t give you a bedtime, and you said you liked him because of that.” She hummed, tapping her chin playfully when a giggle erupted the child’s lips. He began to slide down and hide behind his book all while giggling cutely. Nami couldn’t help but laugh and tickle him. Soon, her home was filled with laughter of both hers and her nephew. Chanyeol sat in front of them, taking in the sight with a heartwarming feeling. It warms his heart to see his baby sister become so attached to her nephew, and he was afraid that she—or their parents—wouldn’t accept Jaeseok from one of his past relationships. A relationship that didn’t end well…unfortunately. A relationship where his son’s mother didn’t want him because she didn’t want to be a mother or liability to anyone. But his family accepted his son with open arms, saying that Jaeseok was the first grandson of the family. They had no complaints, and it was heartwarming by how much support he’s gotten from his family.

A sigh left Chanyeol’s lips as he stood up. “I should get going, I got to be there early tomorrow.” He said, and Nami also hopped up with her nephew up right next to her. “Be safe,” she mentioned, patting his arm with a grin. “Bubs, give your dad a hug.” She ushered, and Jaeseok took no time gliding towards his dad. He planted a kiss on Chanyeol’s cheek and wished him goodbye. “I love you. Be good for auntie, okay?” The six-year-old nodded with a grin, throwing up a thumbs up to his father. Nami smiled, taking the child into her own arms after Chanyeol had placed him down. She soon followed him to the door, waiting as he slipped on his shoes to know it was safe to close the door.

“Lock the doors, sleep well!” Chanyeol called out from his car, waving to his sister and son as he bent down to get into the car “Drive safely!” She said, and he gave her a thumbs up the same way Jaeseok had given him.

Soon enough, she securely closed the door and noticed the tired child resting his head on her shoulder. “Come on, bub. Let’s go get you changed into jam-jams, so we can wake up early.”

“Jaeseok, buddy, come on! We’re going to be late for your swim class if you take forever up there.” She hollered, tossing snacks and juice boxes into mini duffel bag Chanyeol had given her for Jaeseok’s swim clothes and clothes for the weekends. She had told him that she didn’t need it when he had so much clothes at her home anyway, but Chanyeol—well, he’s Chanyeol. She even made sure to pack her own swimsuit, in case something went wrong. Not that she'd think anything would go wrong, but she packed it anyway.

“I’m here, auntie!” Her six-year-old nephew exclaimed, hopping off the last step of stairs. “What were you doing up there, hm?” She asked, but she already knew her answer when she saw the number of toys he had carried down with him. “I didn’t want to leave Mr Dinosaur by himself,” he mumbled, hugging his stuff dinosaur close to him. “You can take him with you, but we cannot take it into the swimming area. He has to stay in the car, okay?” Jaeseok nodded as she bent down to fix his clothes, making sure his shirt was properly on and his pants aligned in the middle before checking that his swimsuit wouldn’t suffocate him from the inside out.

“Alright, bubba, put your other toys away and go put your shoes on. We got to go now,” she said, getting up to grab the duffle bag, her phone, and her keys. Jaeseok immediately dropped his other toys in his personal corner in the living room before running towards the front door to slip on his shoes. It didn’t take her long to check that everything was off and everything she needed was in the duffel bag for her to follow her nephew to the front door.

“Done?” She asked. “Yes!” He exclaimed, hand already resting on the doorknob, eager to exit the house already. “Okay then, let’s go!”

“Uncle Sehun!” Jaeseok screamed as he ran for his favorite uncle. Sehun turned around, after having talked to one of his co-workers, to laugh before taking the little one into his arms. He carried the child in his arms while the boy clung to Sehun’s neck. “Hey, buddy. Are you going to be swimming today?” Jaeseok nodded slowly when Sehun noticed Nami walking in after the boy—an exasperated look on her face. “What’s with you?” Sehun laughed, pointing at her face. She glared at him and wacked his finger away from her face.

“Do you know how long it took me to convince him that ice cream is not something you eat for lunch? And do you know who I blame for teaching him that?” She asked, pointing her finger right back to Sehun. His lips formed a circle as he looked towards his nephew. “I’m in trouble now,” he whispered, but being Sehun… he chuckled sheepishly and placed an arm over her shoulder while the other held onto the boy. “Why don’t we just… I don’t know, take him to swim class? We’ll talk about this ice cream mess after class ends.”

Nami glared at him, arms crossed briefly: “Are you still working? Because if you are, Jaeseok and I are just fine getting there on our own.”

“No, my last client just left, so I’m basically off the clock. Besides, I kind of want to see how this new swimming instructor of ours function.” N

Please Subscribe to read the full chapter
Like this story? Give it an Upvote!
Thank you!
Next Chapter →
Author's Thoughts
[ AN: 030221 ] Hi everyone! I want to give a big thank you for the 16 upvotes! And the 147 subscribers, thank you so much! I love you all and please continue to support the story. Until next time, loves ♡
Read More →
Back to Top ↑
No comments yet
Back to Top ↑
Foreword
>> Collapse chapters <<
Promoted - Advertise