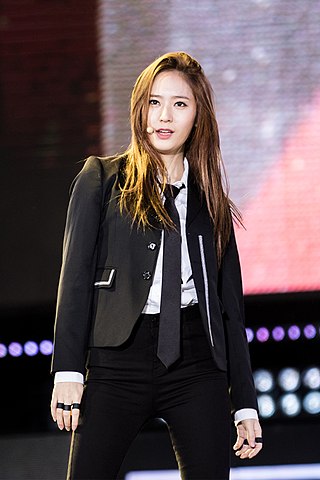 Chrystal Soo Jung (born October 24, 1994), better known by the mononym Krystal, is an American singer and actress based in South Korea. She debuted in 2009 as a member of South Korean girl group f(x) and has further participated in S.M. Entertainment's project group S.M. The Ballad. Aside from group activities, she has also participated in various television dramas such as High Kick 3 (2011–12), The Heirs (2013), My Lovely Girl (2014), and The Bride of Habaek (2017).

Help me find it please!!

Krystal visits elementary school in China for a charity event

Krystal turns into a stylish office worker for 'Bellboy' magazine

Krystal names 'High Kick' as her most memorable acting gig

Krystal says acting is still a learning process for her

'GQ Korea' selects Krystal as the 'Woman of the Year'

Jessica shows support for her sister Krystal and her new drama 'Bride of the Water God'!

Why was Shin Se Kyung surprised when she first met Krystal?

Final line up for my fanfic Sarabande