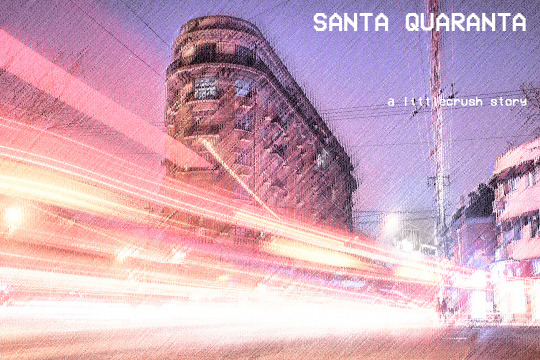 The Mile High Tower is renowned as the place to go if you’re in the city of Santa Quaranta. Or so Jongin had heard. It’s Friday evening and his curious feet seem to be taking him to said place. When he came to town, he heard of an extremely tall building located right in the center, serving as one of the main attractions with its intricate structure and intimidating height. With no less than 484 floors, the tower is truly deserving of its name. Rumor had it that its architect had once dreamed of constructing the tallest building ever.

The city is buzzing. At 22:08 in the evening, Jongin feels more alive than ever. People crossing roads, cars honking, restaurants swarming with customers, clubs blasting music… It’s easy to get lost in all that noise. Jongin had never been fascinated by such settings, but he finds himself feeling in awe at everything he sees. The city is chaotic, but there is also a sense of order in that chaos.

According to the map on his phone, he’s close to the city center and Jongin can feel it before he sees it. The Mile High Tower raises just in front of his eyes and he tries to spot where its end is, but to no avail. The night, although clear, hides the higher floors of the building, shrouding it in mystery. He almost feels intimidated, but at the same time, he marvels at what the human brain is capable of doing.

Someone bumps into him in the midst of the fascination, breaking Jongin out from his reverie.

A boy no older than 15, hands him a flyer before speaking to him.

“The famous Shen Tian sings tonight at the Mile High Club. You can’t miss her performance!”

Jongin doesn’t know who this Shen Tian is, but she must be quite the hype since there are people spreading flyers with her name. Having thought of no better entertainment for the night, he decides he’ll scale the Mile High Tower, for two reasons: out of curiosity and to catch said singer’s performance.

The Mile High Club is located on the last floor of the tower. It takes a seven minute elevator ride for Jongin to reach it and he’s surprised he doesn’t feel nauseated, given how fast the elevator operated. The setting of the club takes Jongin back in time, in contrast to the rest of the tower. The interior is similar to a 70’s jazz club he remembers having visited in New York that one time he went. Round tables with wooden chairs circle the main stage, which accommodates a small sized orchestra. Red curtains separate the stage from the backstage, while the bar sits on the left side of it. The overall colors that dominate are brown and red and Jongin finds the combination and aesthetic perfect.

The place is packed, so Jongin feels lucky when he finds an empty table directly in front of the stage. It seems everybody is in good company, as chatter and laughter surround him from all directions. He thinks he’s the only one who’s unaccompanied, but that doesn’t bother him. The bourbon he ordered is good enough company until the show starts.

“Ladies and gentlemen, welcome to yet another amazing night at the Mile High Club,” he says and the crowd applauds him. “My name is Key and I am your host tonight. But don’t let me keep you away from the real star of the show. You’ve been requesting for her to come back. We heard you,” someone in the crowd whistles. “We heard you and we brought her in tonight,” he speaks in a typically euphoric tone like MCs do. “Ladies and gentlemen, without further ado, please welcome on stage, the one and only, Shen Tian.”

The crowd erupts into a loud applause. Jongin joins them, compelled. From the looks of it, the singer is quite famous among club goers.

The lights dim and the crowd goes silent, before the sound of music spreads in all corners of the club. It’s as if two fast cars are zooming past each-other in a tight race while thunderbolts strike in the sky. At that exact moment a blinding light shines on stage, fading as fast as it hit. The opening drumbeat sounds familiar to Jongin and he’s sure he’s heard the song one too many