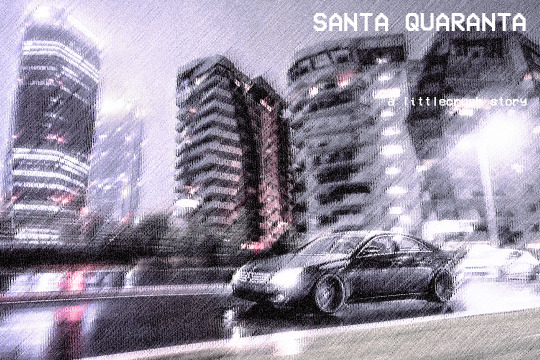 The light of a new day enters through the window. It’s not too strong, but it’s enough to stir Jongin from his sleep. He doesn’t open his eyes yet. Maybe he could stay in bed just a bit more.

It’s only a matter of minutes before the light becomes blinding, so much that Jongin can no longer ignore it. He has no choice but to open his eyes.

He finds a cup of coffee on the table near his bed, but this morning he doesn’t feel like it.

A voice calls for him.

Jongin looks over his shoulder and finds her. Dressed in a white dress, her blue hair dances just over her collarbones. She stands at a doorstep that Jongin doesn’t recognize as the one to his apartment.

“Coming?” She poses the question expectantly, but before he can answer, she is out of the door.

It only takes Jongin a heartbeat of hesitation before he follows her.

The door leads him straight into nature. There’s fog everywhere and there’s also greenery. He manages to spot the girl a few steps ahead of him, ready to take a turn to the left, whether he follows or not.

The more he walks, the harder it becomes to see. Jongin squints his eyes. He doesn’t remember how many turns he’s taken, but that is when it hits him.

The turns are too sharp, too quadratic.

He’s inside a maze.

Maybe she can lead him out.

A teasing smile delineates on her face and she speeds up. Jongin almost loses her from his sight.

He manages to catch up, walking on auto-pilot after her. Yet he can’t reach her.

After what feels like an eternity of being inside the m