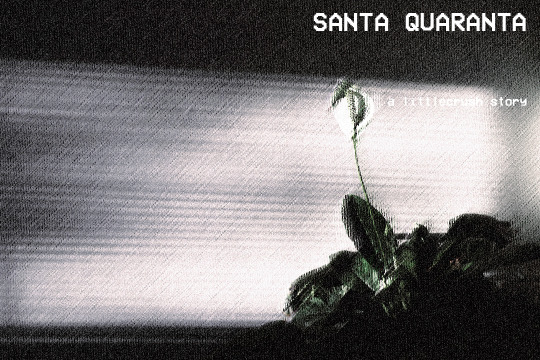 Haneul spends most of her nights out. Since the weather is always warm in Santa Quaranta, she doesn’t worry if it will suddenly rain or get cold. So every night finds her lying on the sand, just a few feet away from the ocean, watching the stars. It’s become her favorite way of passing time lately. The peace that surrounds her is what she wants and needs. She hasn’t been herself for a while and she finds pieces of the comfort she misses in the stars that always shine the Santa Quaranta sky.

Through one of the notes that she put on her fridge, she came to read a letter, his letter that he had written for her, and through the other note, she came to read a diary, her diary, where she had written about him. Just like she had guessed, he had chosen to remove his memories of her, but this wasn’t a game he could beat her at. Not when she was the one who created it. Still, Haneul didn’t hold any grudges against him. Jongin had seen her in the real world and the guilt must have been too much for him to bear. It was all speculations at this point, but she had a feeling she was right about it. She could confront her father, since it had probably been him the one to remove Jongin’s memories. But truth be told, she had been scared to do it. What if her father confirmed her thoughts? That would mean Jongin would not be coming back to Santa Quaranta anymore, not even as a tourist. Even the thought of that being true is scary to Haneul. She knows she’ll have to muster up the courage to do it and it’s better sooner rather than later, but not tonight. She’ll enjoy the quiet as it is, without thinking much about anything else.

Kibum tries to be there for Haneul more than he used to. He has always been her best friend and it’s obvious he would be in every important moment of hers, but he maximizes his efforts. Segi also came to meet him one of those days, asking he keeps an eye on Haneul and Kibum didn’t need to be requested twice.

When he notices Haneul mostly being absentminded, he knows something is wrong, but he chooses to respect her boundaries and wait for her to come talk to him. He just makes sure she eats every day and that she knows she is not alone in whatever she is facing. It takes a while before Haneul tells him everything, but he is patient with her. He can see the sadness in her eyes every time they talk about what it means to be able to live only in Santa Quaranta, so Kibum figures she must be missing someone from the real world.

“Kibum, could you tell my father I want to see him?” Haneul asks him one day.

He is surprised. Haneul has never asked him to arrange a meeting with any of her parents. When they first started coming to Santa Quaranta, she would see them frequently, but that changed with time. The feeling of not being able to be with them in the real world, made Haneul slowly push herself away from them. But she is aware of the fact that her parents still come visit Santa Quaranta and they meet with Kibum to get updates about her.

“Yeah, sure. Any reason why? I mean, is that all you want me to tell him?”

He doesn’t like the tone of her voice, but he’ll comply with what his friend asked of him.

Haneul has thought everything through. She feels nervous before meeting with her father, but it’s not because of what she is going to ask of him. It’s simply been a long time since she last saw the man and meeting him after knowing all that she knows, makes it even harder. She tries to hold herself strong, because there are some more things she needs to know before announcing the decision she has taken.

The first thing she notices when she sees her father is that he has gotten older since the last time they saw each-other. His hair doesn’t betray his age, but there are a few wrinkles on his face that unmistakably witness the process of time going by for everyone, including Shin Segi.

“How have you been?” He asks Haneul, his tone a bit hesitant.

Haneul is relieved her father is equally nervous as her. Maybe this will make it easier.

“Good,” she simply tells him.

A moment of silence stretches between them before Segi decides to break it. “So Kibum told me you wanted to see me.”

“I had a few things I wanted to know from you and one thing I want to announce to you,” Haneul tells her father.