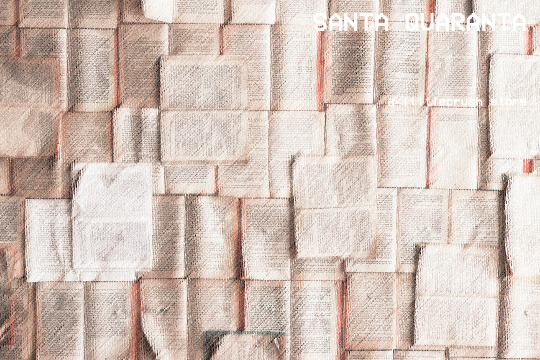 Jongin wakes up in tears at 00:01. He quickly removes the chip that took him to Santa Quaranta and throws it away as if it buzzed him. He sobs loudly until his strength runs out. The pain he goes through is indescribable and burns his heart. Realizing how much he loves Haneul, changed his life. For the first time, he understood the meaning of sacrificing in the name of love and he did it without thinking how much it would tear him apart. Because it means Haneul will not be hurt by him anymore. She will get the happiness he deprived her of, when he crashed into her car and put her in a coma. Jongin will forever be sorry that she can’t be happy in the real world, like a normal girl of her age, with her family and friends, but knowing she exists in Santa Quaranta, allows him to at least breathe. In a few hours, everything will be over and Haneul will get her chance at a fresh start.

Jongin spends that night drifting in and out of sleep. He is scheduled to meet Shin Segi at 11:35, while his removal procedure is scheduled at 11:50. As Segi explained to him, it will only last a few minutes and he will feel no pain. It will be as if nothing ever happened.

Haneul can’t sleep. The letter Jongin gave her is still in her hands and she refuses to let it go. She wants to read it, but Jongin told her she could only do it at noon time. Through tears, Haneul tries to rationalize. ‘Don’t forget,’ he told her. But what if he is the one to forget? She erratically finds a yellow post it pack and tears a paper. Open letter on kitchen table at 12:00. She scribbles on it and sticks it on the fridge. She goes back to her room and takes out a notebook. She writes everything she knows about Jongin, what he looks like, what they experienced together, the fact that he gave her a letter and every little detail. She sticks another note on her fridge, to remind herself to read the notes as well. It’s the only way she can hope to keep him alive in her memories, if he decides to remove himself from her life. She’ll ask for her father’s help to find him again, if need be. But to find him, she needs to remember him and she will make sure she does.

Time goes by so slowly. The waiting kills Jongin from the inside. He tries to go on about his life as usual, but he can’t get his mind to think about anything else other than Haneul and the memory removal. It’s almost 06:15 in the morning when Jongin decides he’ll go for a long walk to reflect on everything.

The sun looks like it won’t rise and the grey sky adds to Jongin’s bad mood. His feet take him nowhere in particular and his mind flies everywhere and nowhere at the same time. He wonders if he will feel anything once the removal is done, if maybe there will be a hollow spot in his heart that will never fully be healed, because he’ll forget about Haneul’s condition and the fact that she possibly won’t regain consciousness in this world. He hopes to balance the unfairness with his own suffering. If Haneul can’t be alive then it’s only right he longs for her his entire life. He must suffer the same. It’s the only way she can have justice.

When the clock nears 11:00, Jongin is still mindlessly strolling through the city. It isn’t as crowded as it would normally be on a sunny day. He realizes how far he’s come and tells himself it’s time. Time to keep his part of the promise.

Shin Segi is personally waiting for him at the reception when he reaches the building. They don’t exchange a word, Jongin only follows the older man to where he takes him. There is no one else there besides them two and the atmosphere feels more eerie than it should. But Jongin doesn’t falter in his steps. He will do what he came here for. He owes Haneul that much. He owes that much to Shin Segi and his wife, for taking away the chance to see their daughter grow.

Segi leads him to a familiar corridor with a grey door in the end of it. It’s where he took him last time to see Haneul. As if he knew what Jongin was thinking, Segi stops walking just to gauge his reaction. It’s a cruel thing he’s doing and he knows that, but Jongin doesn’t hate him for that. There are two turns to the corridor that Jongin hadn’t noticed last time, because he was only thinking of seeing Haneul. Segi leads him to the one on the left.

“It’s where the procedure will take place,” he informs Jongin, who only nods.

The room is packed with the latest technology, according to Jongin’s judgement. While the walls are painted a relaxing blue and there are even flowers on the desk in the middle of the office, the computer that sits right next to it scares Jongin. First of all, the screen is transparent and big and he can see what goes on there, only in reverse. It’s a SanQ logo, very simple, very minimalistic. Second, it’s connected to the chair Jongin assumes he’ll sit in a few minutes, where a weird headpiece is also connected. This is the machine that will extract all he knows of Haneul. He feels himself becoming more nervous with the minutes.

“Your chip,” Segi proffers his hand, requesting for Jongin to give up his access to Santa Quaranta.

Jongin hands it nervously, almost as if he’s letting go a piece of him. The older man takes the c