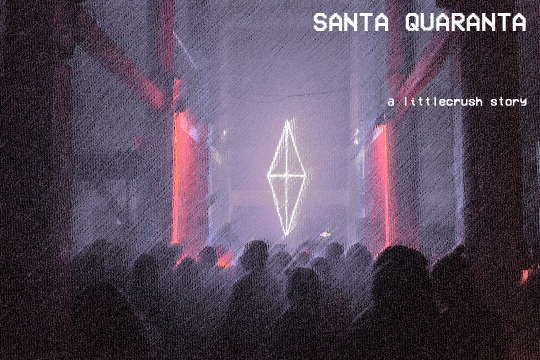 For days, Jongin wakes up from a nightmare that starts with him running to infinity and ends with a clock striking midnight. The aftermath is so intense, that one of those days, he gets rid of every single clock hanging around his apartment. But the torment goes on for a while, even if there is no clock around him to remind him of time. At days, he feels like he’s running out of time. Other days, he feels like he’s running away from time. It seems that it’s the only thing he can’t make peace with. Not when it comes to her. The girl with blue hair, whom he searches for. It’s almost as if the ground swallows her up, only to make her appear for a short while, just enough to stir Jongin’s heart.

It’s another Friday night when Jongin finds himself in the beach area. He feels at home there, even if all he does is walk around, without doing anything purposeful or knowing anyone. It’s how he spends his Friday nights lately, trying to escape the weird relationship he’s developed with time. The street is buzzing as always and Jongin finds comfort in the noise. It keeps him from going insane, while searching for someone who seems to be untraceable or simply doesn’t want to be found.

His feet take him to a bar that seems popular in the area, considered how much clientele there is. It has a gigantic dancefloor and the bar is so big, it seems to offer every drink ever known. Jongin decides he’ll let go for the night and just have fun. Every time he goes out in town, there’s always something impeding him from not enjoying himself. But tonight is different. He drinks without thinking if he’s had too much and starts becoming lightheaded. It doesn’t matter, really, because everything becomes simpler then. He’s in the middle of the dancefloor and he belatedly realizes there’s a crowd surrounding him, simply cheering on him to dance.

The song that’s currently playing talks about someone not being able to forget a girl and if Jongin were sober, he’d stop and laugh about the entire irony of it. But he isn’t and so he simply carries on, not minding if he can’t forget a certain girl.

Jongin doesn’t know for how long he keeps on dancing, but at some point the amount of alcohol he’s consumed starts working against him and makes him dizzy. Whatever adrenaline rush he got, slowly vanishes and Jongin finds himself needing air. His feet are wobbly, but he manages to get out of the bar. The sharp air of the night pierces his nose and he feels as if he’s truly breathing for the first time. He rests his body against the wall, letting the bricks cool his head as well.

“Wow, you are a good dancer,” a girl’s voice makes its way to him.

Jongin opens his eyes. The sight that greets him is as impossible as it gets. Blue hair, brown eyes and a teasing smile.

“Cat got your tongue?” She continues teasing him.

“You’re not real, are you?” Jongin finally finds his voice. “I really must be drunk, otherwise you wouldn’t be standing here.”

“And why is that so?” She retaliates.

Jongin scoffs, suddenly feeling sober. “I’ve been looking for you for weeks and I’ve never even found the tiniest trace of you, no matter how much I’ve searched. And now you’re here… If I’m not drunk, then this must be a dream.”

She simply looks at him, without saying