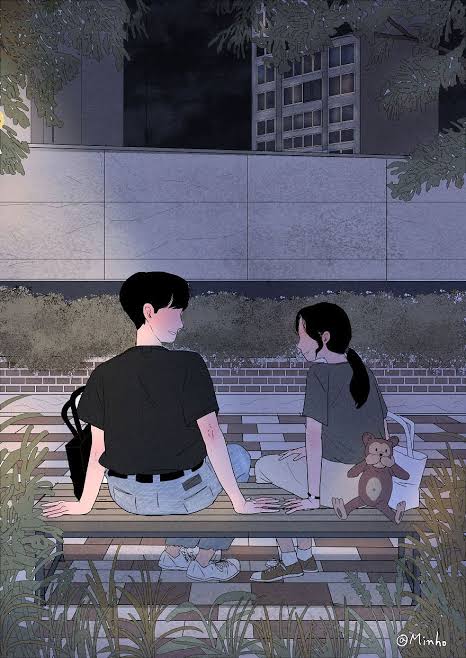 Seungwan and Joohyun were couples since highschool, they shared lots of memories together as if everyone knew that they will end up together and make a family together... But what if everything will suddenly change??

Seungwan is a Law student as Joohyun is a medical student.. Joohyun's parents were against Seungwan since they already want someone for their daughter, but how could Joohyun possibly teach her heart who to love right? When it's only beating for Seungwan..

"ma'am! Are they gonna end up together?" one of my students asked, "ma'am will they be happy in the future??" another student of mine asked and I can't help but to gave them a smile. "should we continue the story now??" I asked as they all gave me a confused lightened face.

Son Seungwan is a Law student... After two more years, she's done with his studies and will finally took an exam to be a Lawyer, while Bae Joohyun is a nursing student

The two were highschool classmates, but not as expected.. Bae Joohyun is the quiet one while Seungwan is the cheerful one, because of their attitude differences, everyone couldn't think that they'll end up together.

​​​​​​"ya! Bae Joohyun" Seungwan called while running towards her. "The Highschool's so-called heart-throb is calling Bae Joohyun?!" everyone gossips as Bae Joohyun lowered her head.

​​​​Seungwan took a seat beside her as he started to comfort her making her more annoyed. She lifts her head not knowing she's gonna see Seungwan's bare face near to hers. "never let them underestimate you okay?" Seungwan whispered as she pats her head ans slowly leaving the place, leaving everyone in awe.

"Ma'am are they inlove?" one of my students asked once again. I smiled as I continued to read.

Ever since that day, the two got comfortable with each other.. Why? No one knows, it just happened, and they became friends until their last year. "Joohyun-a! Principal Lee called you, he asked me to tell you that he's waiting at the garden" Seungwan claimed as Joohyun stood up and walks outside that door, Seungwan leading her.

"why are you still here? I can go to the garden alone you know?" Joohyun stated as Seungwan gave her a soft smile, and they finally arrived at the said place. "hmm? Mr Lee is not here anymore" Joohyun suddenly got nervouse and Seungwan burst out laughing.

"ya! Why are you laughing?!" Seungwan managed to stop laughing "It's just a prank Joohyun-a" Joohyun can't help but to get mad at her when a grip on arms can be suddenly felt.

"sorry... It's just, Aigoo. I don't know where to start or why should I start, but I think I like you and-" Seungwan's words got cut with a kiss.. "what took you so long to admit it?" Joohyun stated and kisses him once again

"eww why would he kiss her?! Girls are gross" another student of mine claimed and I can't help but to burst out laughing... Oh wait I'M A GIRL! "you know what? When two people were so-called inlove, they will show it in actions like kissing and hugging.. One day, you will experience it yourself okay?" I explained as he gave me a kiss on the cheek "선생님 사랑해" (I love you teacher) I smiled softly and continued the story

After 2 years in highschool, 2 years in senior high, they're still holding on to each other and their relationship, strong and neat. When there's a problem, they will talk about it and make it okay. When someone's not okay, they will discuss this topic and be okay...they're really matured about making decisions in their relationship, but another problem is approaching.. Their college now and stressful moments were getting near them. As They-

"oh its already lunch time, let's go eat okay?" I stated as my students were throwing tantrums "ma'am finish the story first!" on of my students said and they all said the same thing

"listen to me okay? We will continue this later.. Later!"