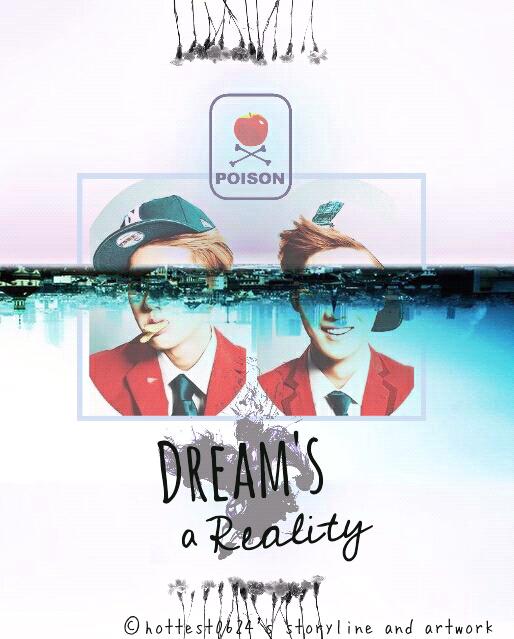 Luhan is a typical school student but got hates from his schoolmates.

He has a secret that no one knows but probably the reason why the hates got thrown at him.

Because of his mind probably.

He's the type of species or creature or anything you prefer to call him, that you can only meet in dreams.

That Luhan can only meets in dreams.

Everything is smooth for the two despite living in two different worlds.

But they're both different.

And the pain is inevitable.

Luhan entered his apartment, releasing a tired sigh as he closed the door and lay down on the couch. Tossing his bag aside, he reached out for the television remote control and press the button ‘on’. He lived alone since his parents lived in China, besides he followed his uncle to Korea but since now, his uncle has some business to do in California, he’s alone. He was about to shut the TV off but something attracted his ears.

“5 victims were admitted to the Seoul Hospital for further treatment of the unknown illness they face. The victims are said to act like a person who’s not stepping on the ground of reality. They keep on laughing, talking, playing and do other things alone. They also keep mumbling names and cry. The cause of this weird illness is still in investigation. No confirmation is out yet since this type of case is such a sudden and new to the doctors. Any ways to avoid this illness will be told to the public.”

He opened his eyes and quickly brought his hand to shield his eyes from the light. He groaned as he felt his body was lying on a hard surface. The floor. He stood up and glanced around him only to receive all white surrounding.

He’s in his dream.

He stayed quiet because it looked like he could do nothing here. There was nothing until a voice interrupted him.

“Hello.” Luhan turned around and see a man dressed in all black from head to toe, making him such a contrast in the white environment. The man’s hair was messy in every direction but yet he still looked good. The thick eyeliner he wore and the smirk he has on his face made Luhan shivered a bit. He’s tall, about a head taller than Luhan. The way he smirked, his high arching eyebrows, sharp cheekbones and jawline, smouldering eyes, hair pushed all the way up messily giving a clear view of his sweaty forehead. His lips were curved up a bit but yet seemed so cunning.

“What are you doing here?” the man smiled, actually he smirked. Again.

“Dreaming. This is my dream.”

“What makes you so sure about that?”

“I just know it.” Luhan shrugged.

“Blink your eyes.” the man ordered.

“Just do it.” answered the man.

Luhan feeling like in no mood to argue, blinked his eyes. When he opened it,

The man who was standing in front of him now looked nothing like the ‘evil’. There, he stood in front of Luhan, honey-brown hair with his bangs down until the above of his eyes, mouth curling up a small smile, a cute one, he was wearing a plain white shirt with a black cardigan.

English is not my first language so pardon the errors and the grammars and the s in this story.