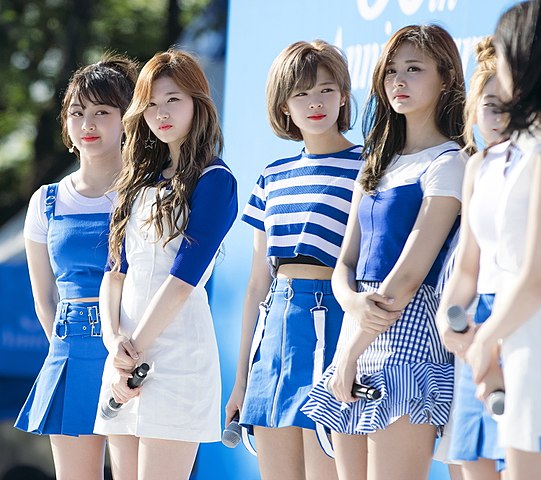 Twice rose to fame in 2016 with their single "Cheer Up": the song charted at number 1 on the Gaon Digital Chart and became the best-performing single of the year. It also won "Song of the Year" at two major music awards shows—Melon Music Awards and Mnet Asian Music Awards. Their subsequent single "TT", from their third EP Twicecoaster: Lane 1, claimed the top spot for four consecutive weeks. The EP was the highest selling K-pop girl group album of 2016, which sold 350,852 copies by year-end. Within 19 months after debut, Twice has sold over 1.2 million units of their four EPs and special album.

The group officially debuted in Japan on June 28, 2017, under Warner Music Japan with the release of their first compilation album titled #Twice. The album debuted at number 2 on the Oricon Albums Chart, which sold 136,157 copies within seven days, the highest first week album sales of a K-pop artist in Japan in two years. It was followed by the release of Twice's first original Japanese maxi single titled "One More Time" in October. With over 250,000 unit sales, Twice became the first Korean girl group that earned Platinum certification by the Recording Industry Association of Japan (RIAJ) for both album and CD single in the same year. Twice ranked third on Top Artist category of Billboard Japan's 2017 Year-End Rankings.

Sana disguised hereself as a staff in the Marketing department because of a certain pale girl who is a manager there, Dahyun. Dahyun however was crushing on her boss, Mina. Little did Dahyun know that she was supervising her future boss.

In which Chaeyoung learns the hard way that freedom can be a curse rather than a blessing.

Mina never liked her sister's bestfriend... Or so she thought...

Dragon's were thought of as nothing as mystical creatures to the humans. They were thought as fairytales to tell children to let them go to sleep with happy thoughts and feelings, even little Chaeyoung had heard these stories from her father but she couldn't believe it when she was staring face-to-face with a Dragon staring down at her with menacing eyes.

Where Mina keeps asking why. Wanting to understand everything, about this strange girl she met on middle school.

Inspired by a true to life love story.   How long has it been? two years? three? How far did I go? Or did I ever made a step to forget her?

The Aftermath [Pre/Se-quel for 10 Years]

Sana didn't break her promise. She made no such thing in the first place and now Mina is dealing with the damages Sana left not because she had to but because she wanted to.      Kim Dahyun was a poem that Minatozaki Sana failed to read.

LOOKING FOR A FIC

Okay guys. So, I had read this particular story a couple weeks back and it was so good I have to read it again. It was like a crackfic or something in a university setting where Lisa, Jisoo, Seulgi, Wendy, Tzuyu, Yeri and a couple more are best buddies and they call themselves UNITED NATIONS or some sort. Jennie got a reputation as a baddie that tutors Jisoo in English because she thought Jisoo isn't good at it when in fact Jisoo's fluent and really, she just forgot how to spe

That One Fan-Made Video

TWICE is filming for their I Can't Stop Me Choreography Video in Studio Choom. Tzuyu is already having a bad day when Sana, all of a sudden, had an uncontrollable, if not unreasonable urge to fix Tzuyu’s upside down butterfly earrings. Indeed, this is weird for Tzuyu given that Sana has already been distant for the last few years. Still, she goes with the flow, thinking this is merely a fanservice for their dying ship. Little did she know...

Dahyun is trying to mooch off of Sana’s WiFi and jokingly puts her name in as the password, then being shocked that it actually works and she’s now connected to Sana’s WiFi…

Dancing In The Rain

Mina and Chaeyoung are exes and they belong to the same circle of friends. After their three years relationship ended, what will happen if they see each other again after three years because of a welcoming party? But... Chaeyoung brought her new girlfriend. Will their hearts take risk again? Will they dance in the rain again?