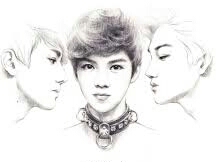 Kai is the weirdo next door, the boy you never wanna meet in an empty alley. The boy who wears black and smokes flies around him (all the time, for no reason). The one you won’t look into the eyes because they might just... You don’t even know why. The person the whole town speaks low of, and usually scares the young curious boys and girls off, so no one else gets affected by him. Yeah that was Kim jongin leaving 2 buildings far from me.

On the other ( the more normal stories) it’s usually this way:

oh he was actually a normal dude living a super normal life and people talking badly of him cause they are mean and for no actual in reason. The bottom usually is scared at first, then finds out the angle kai really is and they go about their way... not here.

Oh Sehun, 21 years old, unemployed, not even in college. What does he do? Hanging in the nearest bar, playing the while he is really just a , only with at leat 4 boyfriends at a time. Homeless? No. run away kid? No... Why won’t he go back home at nights though? Neither do I know… what does he eat, how is he alive? Ask himself maybe one day...

And things get interesting when he meets kai... A new boyfriend, he thought, How wrong he really was... thinking he is so lucky when he meets him, such a handsome man, looking straight at him holding a hand while going like this:

- Hey little one, needing help with that?

Honestly, could you resist against such a chocolate smile sweetly smelling? I know I couldn’t, he knew he couldn’t. So let it be...

AN: the cover is not mine.. honestly i'm just so lazy and it was too good to deny. i just wanted a simple pic of the 3 of them (for the cover cause like.. i couldnt leave it cover less anymore)  but i found that ( its just so fit) and im pretty sure it was for another fic (something called blue?)  so if it was yours (or you know whos it is for) then im so sorry but here is the disclaimer ok? I dont own the cover!

The cover! From left to right, its sehun, lu and his collar, and kai my boy.

Hi... soooo... This isn’t the first thing I wrote but I have never finished anything so... and also I don’t originally speak English so don’t expect hard words or perfect grammar... and though I’ve written stuff I never uploaded them.. Also I kinda like long weird complicated but I’m planning this to be a short story (mostly cause I wanna finish it)

now, I don’t really know where I will be going with this... Honestly I just registered cause one of my favorite fics needed tobe  subscribed to so... But don’t worry what I love is attention so if you happen to read this (meaning like it and want it to go on) you need to let me know (in other words, comment)

I also have two other fics right now The Omega

Its omegaverse obviously, and of course. I think you might like it if you enjoy this already.

And The SM entertainment

Which is am exo ot12 and also slavery world but weirdly its lighter than my two other fics because most people consent in there.

If you read the description already then you know I like to mix things up and do “not common" stuff. But if you are ok with that... (The every second changing story with unsettling stuff) then please have a bite...

Although... if you are not ok with : , pet play, verbal humiliation, noncon relationship, lots of , and any other crazy stuff that might happen ( I will tell ya before each chapter) then it’s not your cup of cake.. Please feel safe to turn into another story.....

With love...and you can call me

Next Chapter →
Author's Thoughts
I had so much plans for this but you make feel like its all for nothing. I won't be updating anything until I fix the first few chapters first.. changing the whole thing to fit more with the rest if the story and in the meantime I hope you like this more and actually read it...
Read More →
Back to Top ↑
No comments yet
Back to Top ↑
Foreword
>> Collapse chapters <<
Promoted - Advertise