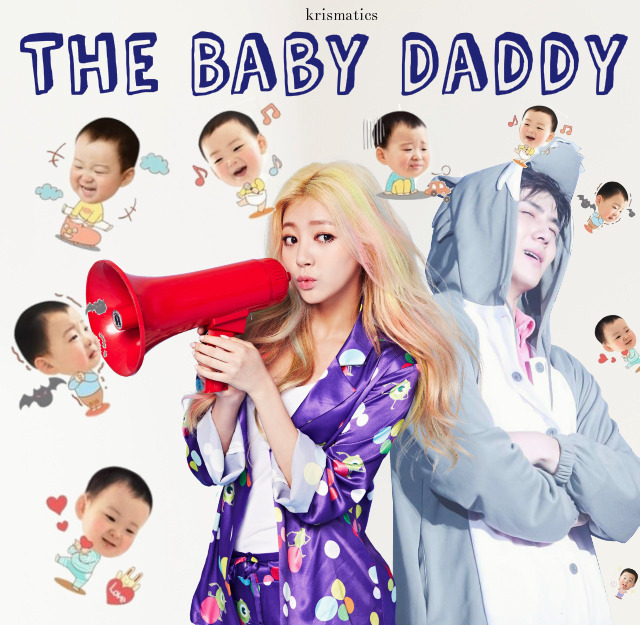 Sehun stood by his doorstep, dumbfounded, by the “present” that was left there. He scoffed and stuck his head out of his apartment and looked down the hallway. “What kind of sick joke is this?”

The baby sat in the box quietly and uncomfortably wiggled its tiny arms around the little space it had before breaking out into a cry; the loud crinkle of the wrapping paper threw it off.

“Oh my gosh!” Sehun squatted down and attempted to hush the baby. He put a finger to his lips. “Shh!” Then he mentally smacked himself upside the head. Why the hell would this baby know what shh means? He slowly dragged the box into his apartment before closing his door- Sehun was a quiet and simple man who would not let a noise complaint tarnish his reputation as a good neighbor.

“Who are you?” He asked softly whilst digging through the contents of the bag. Sehun pulled out a wrinkled piece of paper and furrowed his brows as he read it. “Hello my name is Minguk- Ah, he’s a dude,” He continued. “I am 10 months old and I am your child-“ Sehun dropped the note and fell back. “Huh?!”

Minguk sat in his own spot with his chubby arms by his side as he watched the man fumble around. The baby didn’t know much about the world, nor did he care, he just wanted the strawberry melts that came along with him in the container.

“No…” Sehun shook his head and scoffed. “No way!” He scratched his head and grabbed his thigh as he went deep into his memories. “I never even…no, not even once!” He chuckled and painfully smiled at the almost embracing truth. “I’m a…you know…” He pointed to the baby. “Minguk, you know what I’m saying?! I’m a !” He exclaimed. “I’ve never had a girlfriend! They all stood me up- what are you doing here?!”

Minguk picked up the bottle of snacks and threw it on the floor before cooing to himself.

Sehun shook his head and put everything back into the box. He halfheartedly put a blanket around the kid before setting him back in his original place. “Listen, kid, this is some horrible prank, you got me good!” He picked up the box and approached his doorstep. “I think someone left you here on accident, alright? I’ll leave you back outside, I’ll go to work, and everything will be normal. It’s like we never met!”

He set the box out on the ground and nodded at the child before turning to leave. The peace didn’t last long as Minguk let out a blood-curdling cry moments after Sehun left, causing the man to run out and grab him into his arms.

“Alright!” Sehun sulked and admitted defeat before kicking the box into the room. He held the child in his arms awkwardly and looked around. “S-Should I bring you to security?” He sat the baby down on the ground and picked his phone up.

“What the hell is going on that you have to call me during the asscrack of dawn?”

“Watch your language! You shouldn’t be cursing around children!” Sehun snapped. “Do babies start speaking at ten months old, by the way?”

Kyungsoo, a close friend of his, nearly fainted on the other end of the line once the baby talk began. “C-Children? What are you talking about?”

“This is going to sound insane but you have to believe me- someone kept on ringing my doorbell this morning and when I answered there was nothing but a box left behind.”

“And you’re saying there was a ing kid in the box?”

“Bring it to security or something? Ask the CCTV people to help you out? I don’t know? Find the person who left it behind?”

Sehun his teeth. “You make it sound so easy! How am I going to look if I asked the CCTV peeps for help? Yeah, so this lady left a kid at your doorstep at approximately 4 AM,” He scoffed. “I don’t know what’s worse, having a kid I don’t know about, or being a at 25.”

Kyungsoo cackled at the thought. “Tough life you got there,”

“Kyungsoo, I swear on my life that this child is not mine. He doesn’t even look like me!”

“Send me a picture,”

“What an adorable bastard!” Kyungsoo exclaimed. “Keep him!”

Sehun held his phone by his ear. He was seconds away from hurling his friend out the window. “I’m going to sock you in the face the next time I see you,”

“Nah, you won’t see me anytime soon, taking care of babies is a lot of work.”

Kyungsoo laughed. “What are you going to do about work?”

Sehun snapped his fingers. “Aw man!” He sighed. “I never call in sick.”

“Well, you have to do something about this child first!”

“Do you think I can find his parents?”

Kyungsoo rolled his eyes. “Well someone left him on your doorstep, which means he wasn’t wanted.”

Sehun nodded and tried to hand-feed Minguk a few more snacks, but the baby pushed his hand away. “Crap,”

“No, not yet…” Sehun sighed heavily. “I think he’s hungry.” He mumbled as Minguk on an empty bottle.

“Did his box come with anything?”

“Blankets? A few outfits? A bottle of melting cookies…and some formula,”

“Wow! That person who left him behind had it all planned out! You can totally care for him!”

Sehun dug through the box. “What do I do when I run out of this stuff? Raising a child is so expensive!”

Kyungsoo shrugged indifferently. “Guess this is all a free trial.”

“There is no free trial for raising a kid!”

The lad laughed over the phone. “Call in sick or something, I’ll come over and see what I can do!”

[a/n]: comments are much appreciated!