“Even though she has it hard, her kindness is from another world. A completely contrast to her always cool, arrogant attitude. But even so, she was strong enough to let herself be seen through that mask, even if for a bit.”

Heejin smiled at herself. She couldn’t wait for the class to be over so she could go home with Hyunjin.

Hanging out in Hyunjin’s little corner after classes had become a habit. Just like Hyunjin going to school.

So they enjoyed each other’s company in silence. Like Heejin promised, after Hyunjin was done with homework, they could chill. Heejin sat, back buried in fluffy pillows, drawing on her sketchbook while Hyunjin played the guitar. Heejin had lost count of the times she thought to herself how cool Hyunjin looked, with her focused expression, her fingers producing the sounds that made Heejin’s pencil glide on paper so fluidly, as if her mind would never go through an artistic block again.

“ this !” Hyunjin stood all of a sudden, throwing her guitar to the bed and taking her hands to her hair.

Heejin tensed up, but forced her muscles to relax. “Hyunjin, what happened?”

“I can’t get that part right.”

Heejin knew she wasn’t mad at her, but she became angry too easily sometimes.

“Hyunjin,” she gently called, and the frown in her face disappeared the same second, a talent she was so proud of having. “Sit down.”

She sighed, put the guitar on its stand, and sat next to her. Heejin grabbed her hands, feeling the roughness of her fingertips, especially of her left hand. “You need to take care of your hands. Your fingers are almost bruised.”

“It does hurt.” Heejin’s voice was stern as she shook her head. She fetched her hand cream from her bag and spooned a generous amount.

“I don’t need that, I’ve been playing the guitar for long enough for my fingers to be tough enough.”

“I don’t care.” Heejin gripped on her left wrist, turning her hand up, and applied the cream on her fingertips. “Like every activity or sport, you need to take care of yourself and take a break sometimes.”

“How am I gonna play now with my hands all greasy, Jeon Heejin!” Hyunjin fought it, trying to escape Heejin’s grip. She was much stronger than Heejin, it should be a piece of cake for her, but still, she was only trying.

Hyunjin rolled her eyes, giving up at last. Heejin beamed and kept on massaging her hands, stealing a glance or two at her face. Her heart might have thumped harder when she noticed the small smile on Hyunjin’s lips.

“So much for not wanting your hands greasy,” Heejin mumbled, expecting a reaction, but there was none. “Cat got your tongue?”

Heejin drove her attention back to Hyunjin’s hands, or else she would see how red her face was becoming. “Your hands are so big.”

“You really want to compare? So you can make fun of me?”

Reluctantly, Heejin put her hand against hers, and Hyunjin’s was almost a whole phalange bigger. Heejin giggled, but from how the butterflies tickled her stomach, as she wondered how it would feel to have their fingers intertwined.

“My arms are also huge for some reason,” Hyunjin said. “They’re longer than an average man’s arms.”

Hyunjin crackled. “I’m not! I compared with both my brothers. My arms are longer. And more buff, by the way.”

She already knew perfectly well how toned her arms were, she didn’t need to be reminded... But she scoffed, an attempt to hide how her insides still trembled.

“What were you doing?” Hyunjin asked, staring at Heejin’s sketchpad.

“N-Nothing.” Heejin quickly reached for it to hide it behind her back.

“You’re always doing something. Do you write?”

Should she show her? The dozens of sketches she had of her?

“I’ll show you if you play and sing something for me. The new original.”

Hyunjin stared at her. “Alright. Show me your thing first, while my hands dry up.”

Heejin took a deep breath and brought her sketchbook to her lap, squeezing it for a few seconds before handing it to Hyunjin. She opened it and her eyes widened the same second. She flipped the page, observed it, then flipped another, her eyes still bulged. “Are these your drawings?”

“No, I have an artistic spirit possessing me and drawing for me.”

Heejin’s poor heart didn’t know how long it would last. “You really think so?”

“Yes! Your style is so unique. It’s not too cartoonish, or too realistic, it’s... just perfect. And... I’m a pretty damn good model, ain’t I?” Hyunjin smirked, showing a sketch from when she was playing the guitar. 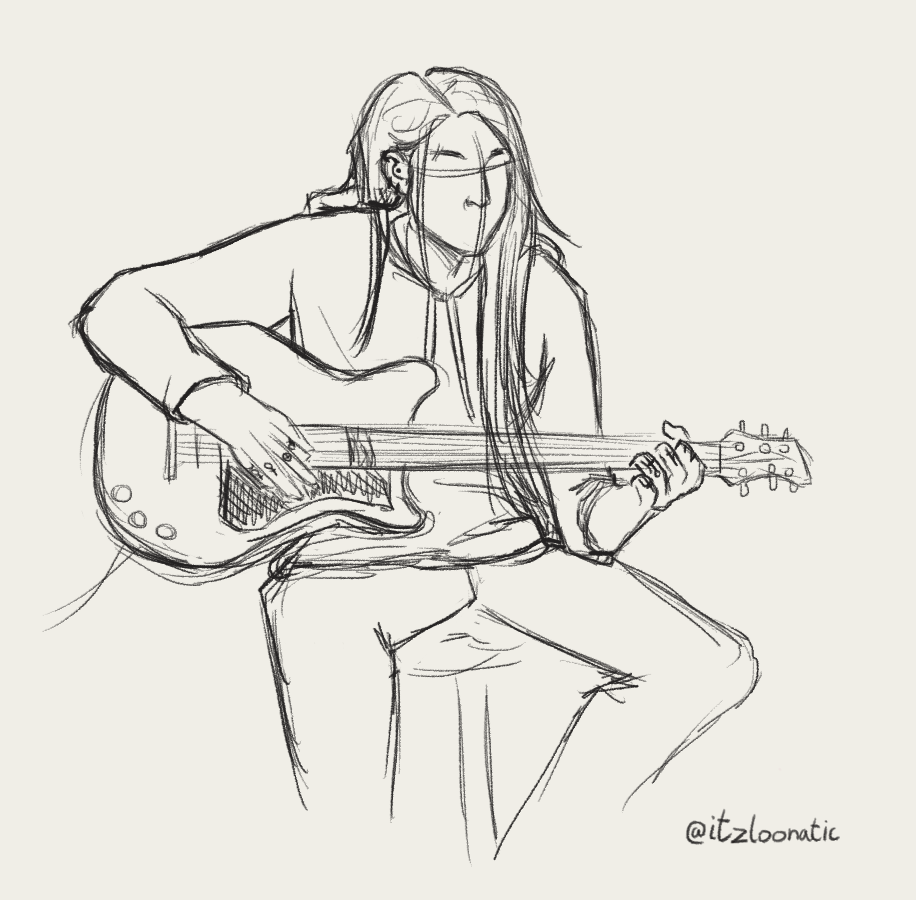 Hyunjin laughed. “Who’s this, though?” She pointed to a drawing of her still nameless character. 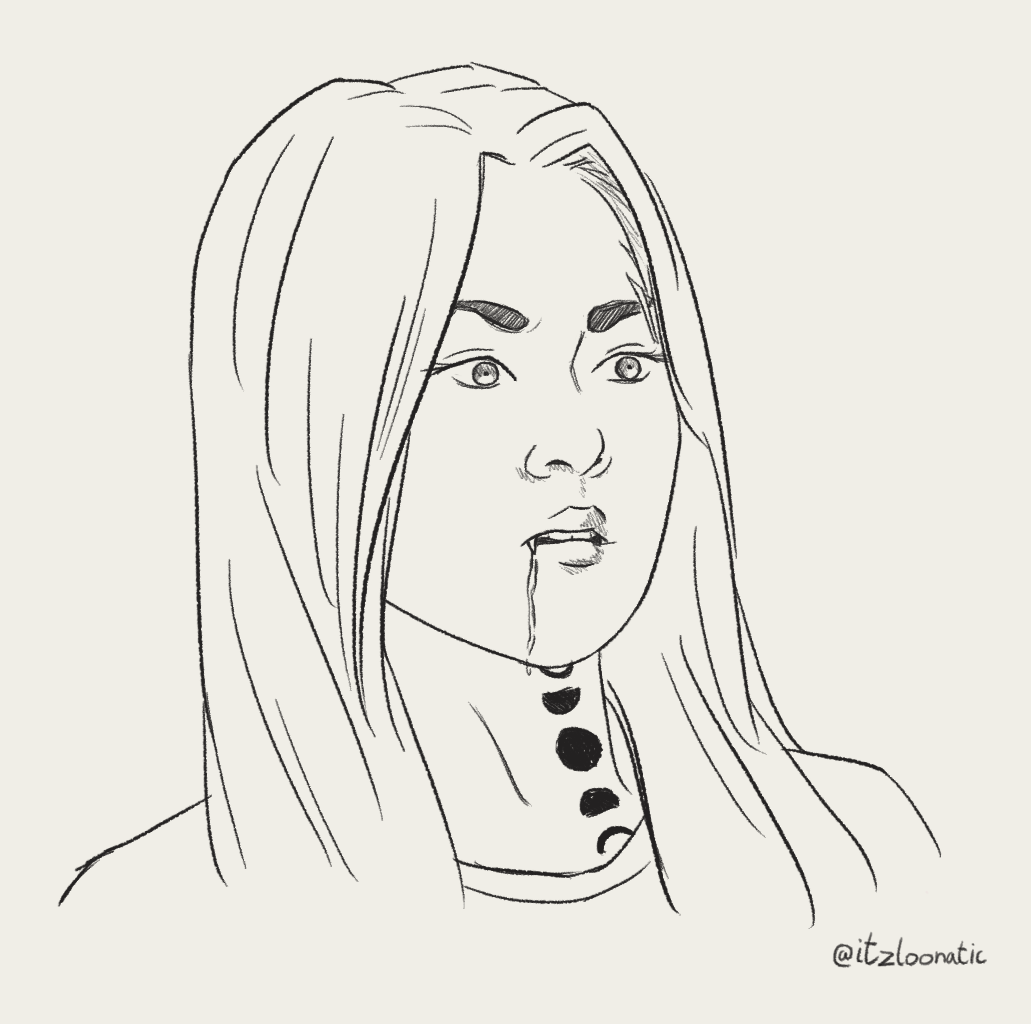 “Tell me about it! She looks so cool, is she a vampire?” Hyunjin took a closer look. “Is that blood on her lips? Why does she look so distraught? And wow, the same tattoo as me.”

Heejin gulped. “Y-Yeah, she’s a vampire, and that was just an expression practice, it’s random,” she let out a nervous chuckle. “And yes, it’s the same tattoo as you have. I hope you don’t mind me stealing that idea.”

“Of course not, it’s not even my idea. There are tons of these moon phase tattoos.”

“Oh, I see. But you’re sure you want to hear about it? I don’t want to bother you, I’ll probably talk too much.” And she didn’t want to make a fool out of herself, telling Hyunjin her dumb story and getting judged.

“Please do, you know I love fantasy stories.”

But the look Hyunjin gave her and the eager tapping on her legs told her she actually cared.

“Alright. The story is set in a world where vampires exist, and therefore, vampire hunters also exist, which are actually humans with no special powers whatsoever. But they don't get along at all, since they’re so prejudiced against each other. Even though the main character is a vampire, she kills vampires.” Heejin explained, and Hyunjin listened attentively, nodding as she spoke. “She resents vampires in general because she was robbed of her normal life and her family and friends, and that is why she hunts rogue vampires who do that kind of evil things to other people. But of course, since she is a vampire herself, she could never be accepted in the ranks of vampire hunters, even if she tried, because she would never be trusted. So, she lives her lonesome existence with the sole purpose of eliminating bad vampires. That is, until--”

“She meets a vampire hunter and they get along!”

Heejin nodded with raised eyebrows. “Yes, exactly. Well, it doesn’t go well right away, of course, but that’s the premise.”

“I love it! I love that trope of a character that is something they hate, but they use it to their advantage. I think it’s so cool and conflicting because they have to live with it, but at least they do something out of that.”

Talking about her story with someone who shared the same enthusiasm was something new to Heejin. Not that Chaewon or Ryujin weren’t happy to hear about it, but their response wasn’t the same.

They kept talking and spazzing about Heejin’s story, while she was careful not to reveal details that let Hyunjin know she was more of an inspiration to the character than she thought, even though her tattoo was literally there...

“She doesn’t have one yet. I need to think about that, but now aren’t you forgetting about something?”

“Your hands have already dried.”

“Hm, but do I really have to? As I said, then it wouldn’t be a surprise when we perform it.” Hyunjin smirked.

All the excitement on Heejin’s face died out and her eyebrows drew together. “I can’t believe this, Hyunjin. You were the first to hear about my story, I showed you my drawings, and you can’t play even a little bit?”

Hyunjin’s teasing smile also disappeared. “I didn’t know. I thought I was just another person you told about.”

Heejin looked away, huffing. “You were wrong. This is really important to me, and you took it like it was nothing, after all.”

A clean sound of the guitar ringed, making Heejin raise her head to find Hyunjin looking down at her guitar on her lap. After a few seconds of pure melody, Hyunjin sang, her voice ever so soothing and deep and capable of calming Heejin’s heart.

Heart racing
When you open the door to my deeply-hidden secret
You and I
Breaths so close, like we’re filling the gaps, hush
Are you coming right now?

She stopped, and slowly, as if scared, raised her head until she met Heejin’s eyes.

“I’m sorry. It’s not that I didn’t take it as serious as you did. I just... didn’t realize how important that was to you, and I was just trying to mess with you,” Hyunjin said and Heejin could hear the honesty in her voice. “This was the beginning of our new original. It’s called Uncover.”

“It’s beautiful. You wrote that, didn’t you?”

“I can’t wait to listen to the complete song with the whole band.”

“Well, you don’t have to wait much longer.” Hyunjin smiled. “We’re gonna perform next week.”

Heejin’s lips stretched in an ear to ear grin. “For real? When?”

Look forward to the next chapter... it's a big one!