“She is reckless and fearless, yet gentle and caring. She doesn’t tolerate injustice and fights for what she stands for, no matter the consequences or who tries to stop her.”

Heejin jumped on her chair and looked ahead, at the smiling Chaewon staring at her sketchbook. “Who said this is Hyunjin?”

“You’re basing the character on her, it’s only normal you’re picking on her personality as well, even if unconsciously.”

Heejin looked down at her random notes and sketches of her character. “It’s not even unconsciously. I’m doing that.”

“But that’s not a bad thing! And does she have tattoos now? What’s that on her neck?”

Heejin turned the sketchbook to her. “A moon phase tattoo. She loves the moon.” 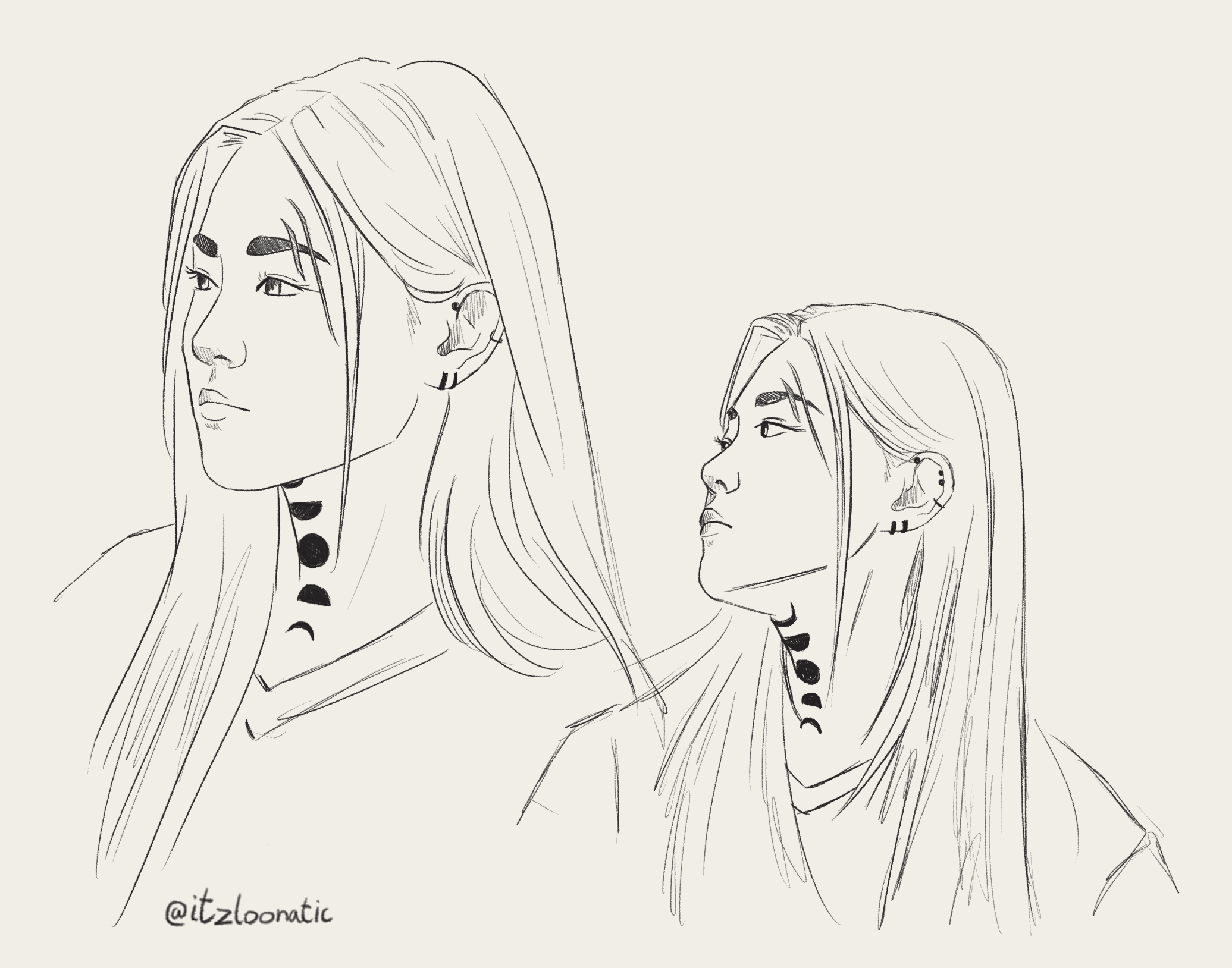 Chaewon observed the drawings in awe. “Does Hyunjin have a tattoo like this?”

“She does! Where, though? Not on her arms or anywhere visible…”

“I-It’s on her back!” Heejin could feel her ears warming up.

“Wow, Jeon Heejin, I’m impressed. How did you manage to see her back, and what else did you see so far?” Chaewon snickered.

“She was wearing a sports top, it’s on her upper back, it was visible at that time! And I didn’t see anything else, what in the world are you thinking?”

Chaewon tried her hardest not to burst out laughing. “Nothing, nothing. I’m happy you’re finally working on a story, even though right now you should be doing your homework. That’s what we came to the library for.”

Heejin sighed and closed her sketchbook. “I know. And I’m not exactly working on a story. It’s just... something.”

“And something’s very cool! Those sketches looked great, really. Please, Heejin, give yourself a chance. At least try.”

“I’ll think about it. Now let’s finish this, I’m getting hungry.”

“Oh no, I don’t wanna deal with a hungry Heejin.” Chaewon grabbed her pen and focused back on her books.

Heejin chuckled and did the same. But she was still thinking about her character and how easily she was coming up with ideas. Maybe she should try to make something out of that instead of stuffing another possible story on her drawer of endless discarded ideas.

They stepped outside the building after getting their well-deserved food.

“Why don’t you ask Hyunjin to do something?”

“Only if you do that with Hyejoo.”

Chaewon balled her fists and stormed away, with Heejin rushing to keep up with her, laughing. “Did you talk to her at all during the weekend?”

“Did you with Hyunjin?”

“I was with her Friday, I told you! I invited her to my house and cooked dinner with her! And don’t answer a question with a question.”

“I didn’t have anything to tell her!”

They stared at each other, then burst out laughing at the same time. “At least Hyunjin is coming to classes,” Heejin mumbled.

“Hm?” Heejin followed Chaewon’s line of sight. Hyunjin, Hyejoo, Ryujin and Yerim played basketball together on the campus court. Ryujin and Hyunjin hugged, celebrating after scoring with a beautiful play. Heejin smiled, both envying Ryujin and finding that moment precious.

“L-Let’s go.” Chaewon grabbed her hand, pulling her away.

“What, no. I wanna watch their game, they seem to be having fun.”

“Stop being a scaredy cat! Hyejoo’s not gonna bite you.”

“I wish she would,” Chaewon mumbled, letting Heejin drag her towards the court.

Heejin used all her might not to laugh and pretended she didn’t hear that. They approached the protective rails and Heejin leaned with her forearms, not minding to hide the fact that she was staring directly at Hyunjin. She looked so cool with her sports uniform, a band on her forehead, and her focused, competitive expression on.

It was Ryujin and Hyunjin’s turn to defend. Yerim started, and managed to dribble past Ryujin. But when she tried to pass the ball to Hyejoo, Hyunjin jumped so fast to steal, Heejin’s chin dropped. And only then did she notice a couple girls on the other side of the field, squealing and calling for Hyunjin’s name. Hyunjin waved at them and they jumped with more squeals. So some of her fangirls went to their school too? Wow, was she popular.

As they changed positions, Ryujin noticed them.

“Oh, Heejin, Chaewon!” She waved at them, making the others look at their direction as well.

Heejin smiled and waved back, her heart skipping a beat when Hyunjin smiled back at her.

“Wanna join us?” Ryujin approached them, cleaning her face on her shirt.

“Oh, no, we’re good watching. Unless Chaewon wants to?”

“Alright, then root for us!”

“I will.” Heejin showed a balled fist as Ryujin made her way back.

They played a couple more rounds and walked back towards them.

“We won, of course.” Ryujin smirked, resting her arm around Hyunjin’s shoulders, and Heejin gave them a thumbs up, melting with Hyunjin’s proud smile.

“Hyunjin is a professional! Next time I’ll team up with her.” Yerim crossed her arms.

“Fine, me and Hyejoo will beat your asses, no problem.” Ryujin mimicked her.

“Hey!” Yerim smacked her head. “You said you wanted to team up with me!”

“No, I didn’t! I bet even Chaewon is better than you, even though she’s a midget.”

Heejin held her laugh as best as she could, while peeking at Chaewon. Her face was so red Heejin wondered if she was feeling okay.

“I-I can play with you next time,” Chaewon said.

Now Heejin widened her eyes at her. Where did that courage come from?

“What if next time the both of you join us and we do a three versus three match?” Hyunjin suggested.

“Yes! Heejin, you’re in my team.” Ryujin stood beside her.

“Alright, as you wish. How about we go home now?”

Just as they stood outside the main entrance, Chaewon, Hyejoo and Yerim went the opposite direction. Heejin tried not to laugh about the panic in Chaewon’s features, mouthing a ‘fighting!’ to her.

“See you guys tomorrow!” Ryujin hugged the both of them before turning her way home, leaving Hyunjin and Heejin alone.

They walked in silence for a bit, but Heejin didn’t want it. Just like she didn’t want to go home.

“Yes, we ended up not watching it. Let’s go to your little corner?”

“Is that what you call it?”

Heejin smiled at her, but her heart beat with sadness. She never had the courage to ask her why was she living in someone else’s garage, but still called it home. She never mentioned her parents as well, only her brothers. A sudden urge to grab her hand pulsed on her skin, but she fought it.

“Actually, can we make a small detour?” Hyunjin asked, slowing down nearing an intersection.

Heejin followed her to the opposite direction without a question.

“You see this wall?” Hyunjin asked, her hand hovering near a certain house’s white wall. “When we were kids, me and Jinsol painted it with graffiti.”

“Yeah. We got in so much trouble.” She chuckled. “We weren’t normally troublesome kids, but that time I stole a graffiti can from my brother and, I don’t know, we thought it would be a great idea.”

“Then you realized it wasn’t.”

They kept walking until they stopped in front of a big, modern house.

“One minute, I’ll be right here,” Hyunjin said, opening the front door with her keys.

Heejin nodded. Hyunjin had a key to that house. Was that her family’s? Was that where she used to live? Why would she leave such a nice house to live in a garage? Again, more questions swarmed Heejin’s mind, growing her curiosity about Hyunjin.

She waited for a couple minutes, until she heard a voice inside. A female voice she didn’t recognize, talking to Hyunjin. Heejin neared the door but recoiled the next second.

“You’re not my mother, you don’t tell me what to do!” Hyunjin shouted, and steps became louder as the other voice called for her name.

Heejin stood in the same spot when they arrived, her stomach doing a thousand flips. The door opened with Hyunjin stepping outside, carrying a padded jacket and a long, checkered coat.

“Needed to get this, it’s getting colder and I don’t have any warm jackets back home.”

They walked in silence, Heejin’s mind getting more questions by the second. Hyunjin didn’t... have a mother?

“Yes, just tired. Studied a lot during the afternoon.”

“Do you wanna go home instead?”

“Not necessarily. Unless you want to be alone?”

It didn’t matter what Hyunjin was hiding, if that was what she wanted, Heejin would respect her privacy.

They sat on Hyunjin’s mattress, and Heejin leaned back on the wall, stealing glances at her as she her laptop. Hyunjin kept staring at the it with lips pursed and drawn eyebrows, even though it already showed the home screen. Heejin took a long, silent breath. Should she talk about what she heard?

“Hyunjin,” she called in a whisper, bringing her back from her thoughts.

“Sorry, I spaced out.” She gave Heejin a smile, but she knew it was a forced one as well.

She played the movie and leaned back as well, sitting the laptop in the bench in front of them.

The movie was enjoyable, but Heejin wished she could put all her focus on it. No matter how hard she tried, the words she heard earlier didn’t stop ringing in her mind, along with the questions and worries. But she wouldn’t ruin the moment, not when Hyunjin for sure wanted peace.

Heejin's character got an upgrade, I hope you liked it! (not gonna lie, I love that tattoo on the neck.......)