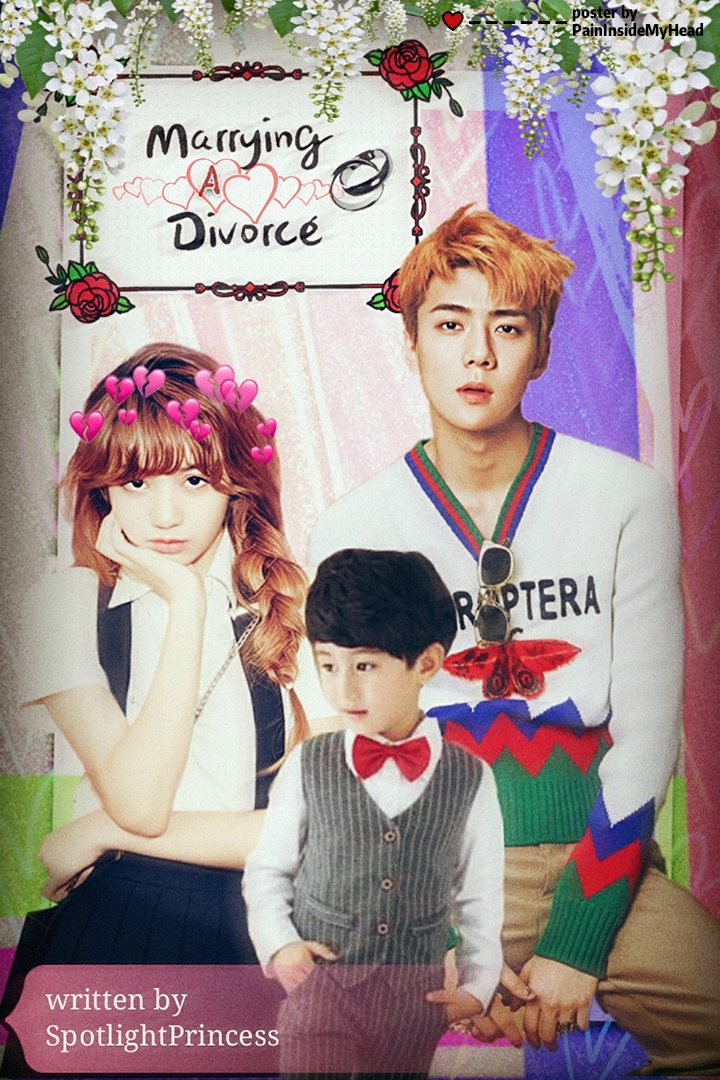 To my new Subbies and to those who haven't yet upvoted, please support me by upvoting this story if you like it so far, I'll be so glad if you could do this much for me. Thanks!♥

Also, Special thanks to PainInsideMyHead for designing this poster for me. She's indeed the best. Love her to the moon and back. ♥

"Mummy do not let that ugly, wicked man to kiss you but let Uncle Senniehun kiss you instead."

"What did you just say son?" Wookyung asked, the demon in him breaking loose as he turned towards Hyeri "Can you see the bad, naughty boy you gave birth to for me or are you blind?"

Getting up from the chair, Wookyung matched over to the kid, ready to spank him but just then the little boy moved away from the angry man as he rushed over to Sehun, causing Wookyung to miscalculate and fall.

"You naughty fool, get back here." He roared in anger as he got up from the ground, pushing Hyeri who got up to give him a helping hand away as he advanced towards the little boy but just then, Sehun stopped him by holding unto Wookyung's hand in a tight grip, surprising both Wookyung, Minjun and Hyeri.

"Don't you dare stop me Sehun! Better stay out of this!" Wookyung roared in anger.

The frown which was evident on Sehun's face few seconds ago was quickly replaced with a smile as he let go off the man's hand.

"Oh come on Mr Wookyung, he's just a kid, don't take what he just to heart, else you might end up injuring the child and we don't want that do we?" Sehun asked in a calm tone to which Wookyung faked a small smile before nodding in agreement.

"Of cause Mr Sehun, you're right." He muttered to Sehun's hearing before grabbing the car keys, ready to leave.

"My love you.." Hyeri started but then he cut her off with a hand up in the air.

"No Hyeri, I'm too busy to take you out for lunch or dinner whatever because i'm too busy with work so some other time." He said before walking off to which she slowly nodded in agreement with a look of sadness evident on her face.

Few minutes later when Wookyung left, Sehun let out a small sigh as he stared at Hyeri and she looked really pale and pathetic, like one with so much problems laid on her shoulders.

'Should I speak with her regarding her husband's behavior now or should I let it be for now?' He said in his heart as Hyeri dropped the dirty plates into the sink.

"Cool." He replied before getting up to join the kid who was already bouncing up and down in joy to which Hyeri chuckled in amusement.

"Mummy, come over here and join us in this interesting game."

"No, no my son. You two should carry on with the game."

"Hyeri come join us, the house chores will be done later." Sehun insisted to which she let out a small sigh in return with a calm smile plastered on her lips.

"Okay, okay." She replied before joining in the game.

"Minjun, Hyeri let's do the rock, paper, scissors and whoever loses will be the one to.."

"To seek!" Minjun said out loud in joy, cutting Sehun off to which both Sehun and Hyeri chuckled in amusement.

A minute later, Sehun was the one to chase both Hyeri and Minjun so he closed his eyes so they could hide properly in any corner of the mansion and counted from 1 to 10 before going to search for them.

"Minjunnie, Hyeri, where are you?" Sehun called out in a playful sing song voice to which both giggled in amusement.

"I will find you and tickle you so hard you'll forget your name~" Sehun went on with a bright smile on his face.

"There, got you." He said to no one in particular, causing both Hyeri and Minjun to tense up and both came out of their hiding spots to hide elsewhere but just before Sehun could touch the kid, Minjun quickly pushed his mom into Sehun's chest and Sehun's hand acted on their own accord as it held unto her waist to keep her from falling backwards, causing both to gasp at the force as their lips crashed into each other's.

"See mummy, Uncle Senniehun will kiss you better than that ugly, bad man." Minjun said in enthusiasm before running off, not forgetting to scream "Mummy you'll have to search for me and Uncle Senniehun, You lose."

Quickly pulling away from each other, Sehun began to stutter as he started pacing around while Hyeri flushed a deep red in embarrassment and surprise as she lowered her

Please Subscribe to read the full chapter
Like this story? Give it an Upvote!
Thank you!
← Previous Chapter Next Chapter →
Author's Thoughts
Hello Babes. A new chappie is up. Please read, comment and give it an upvote. ♥
Read More →
Back to Top ↑
No comments yet
Back to Top ↑
Foreword
>> Collapse chapters <<
Promoted - Advertise