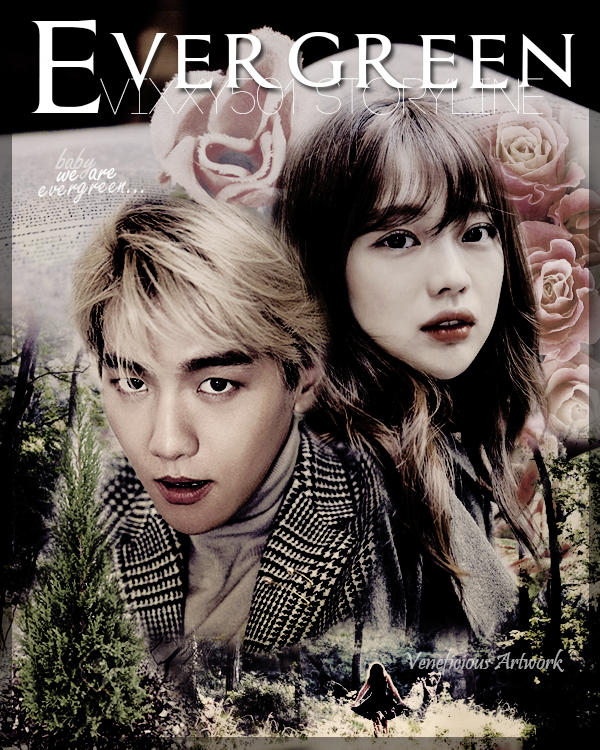 Love is like a tree; from the moment it sprouts from the ground as a sapling you have to nurture it every day until it grows thicker and taller, and its roots get stronger. But when the sinister winter season comes by, the frost withers its leaves and everything comes tumbling down.

But we are different; winter can come and go as it pleases, as we are immune to its frozen wrath.

Hello everyone! I'm writing this one-shot to enter as a contestant in the "The Rabbit Hole" writing contest!

Also, thank you Mystic Multi-Shop for the poster and background!

"Baekhyun, can I ask you something?" She murmured, her eyes never leaving the cloak of stars that hovered over the atmosphere. She didn't need to see his face at the moment, as simply the sound of his shallow breathing and the tickling sensation of the small hairs on his forearm brushing against her skin was enough to comfort her troubled mind.

"Yes?" He hummed in response, shifting his body so that he could take in the features of her face. Everything about her seemed to embody the definition of perfection; from her curious brown eyes, the delicately sloped shape of her nose to the light pink lips that curved into a complacent smile. Her hair almost blended in with the cold prickly grass under her head - almost like a fairy.

"What would you do, if someone you cared for a lot...just left? Without any warning." She asked, her eyebrows furrowing in contrast to her previous carefree temperament.

Baekhyun swallowed the lump that had grown in his throat and fought to slow his rising heart rate. He reached for her petite hand, entwining his long fingers with her smaller, delicate ones.

"If this is about me, please don't worry, Jihae. We've been together for so long, why would we ever let ourselves be apart?" He pulled her over until she hovered over him, their foreheads lightly brushing.

"You're right, I don't know why I was having those incredulous thoughts." She smiled chastely, playing with his fingers that were still locked between her's.

As she was busy immersing herself in some relieved thoughts, Baekhyun found his eyes watering slightly. His heart ached for her-no, for them- as he knew that he shouldn't be making promises he couldn't keep. Just as a lone tear let itself cascade down his cheek, he pulled her head down to rest on his chest. She comfortably snuggled into him, unaware of the waterfall pouring down his face. He may have felt warm to the touch, but the cold persistent pain that he felt in his chest was overwhelming.

It was unfair for him to lead her on for so long, allowing her to drown in oblivion until the last minute. But by the time she dove back into reality, she would have already been underwater and unable to breath.

However, he already knew that every tree must die at one point, whether it succumbs to the harsh winter season, or splits in half because it's unable to withstand the violent winds of a thunderstorm.

But the catch is that you never know when that tree will finally give out.

And that was Baekhyun thought about that exact moment. Rather than preparing for the tree to collapse, and waiting for the end like a test result, it would be better for them to enjoy their last moments together in bliss and happiness.

That way, even if the tree was a maple, redwood, or even weeping willow, it would be remembered as Evergreen forever in their hearts.