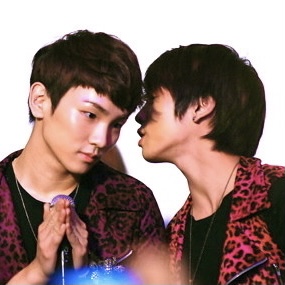 Taemin is a young, pretty, kind and funny boy and Jonghyun is totally smitten with him. They don't really know each other, but he has had the chance to get acquainted with him sometimes thanks to some extra-curricular projects. As easygoing as Jonghyun is, he can't work the nerve to try and approach him aside from those "forced" occurrences; and so he thinks maybe there is another way. Kibum is Taemin's best friend and they share some classes together. Jonghyun thinks becoming friends with him first could be a good strategy; plus, he looks like a good guy so not only would he get closer to Taemin thanks to him, but he would also acquire a new friend along the way. What he hadn't taken into account were his feelings taking an unexpected turn.

So this was prompted originally for @summerofshinee on twitter!