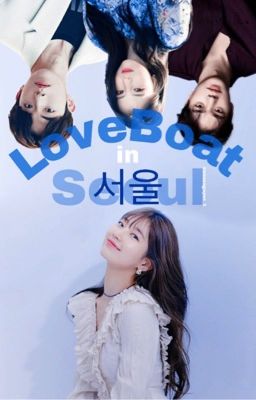 I Love You Boy

When I come down for breakfast in the morning, Joohyuk rises from a table for two by a window overlooking a garden. The hard body I explored last night is now safely clad in a green T-shirt and sports shorts. He pulls out my chair, and the mischief in his warm eyes, the quirk of those lips that did glorious things to me, makes me blush.

"You're up early," he teases. And when I simply drop into the seat, he feigns surprise. "Someone's in a good morning mood."

"I had a nice night." I open my all-Korean menu. "You know, the Dragon would be proud. I can read which dishes are soups, meats, veggies—"

"Nice? Your night was nice?" Joohyuk grabs my waist, angling for a kiss. My menu drops. "When we get to Heaven Lake tonight, I'll show you nice."

He kisses me and I tuck my hand into his hair that I am seriously crazy for. Our tablecloth is slipping and we're drawing attention from an older couple the table over, but I don't care. I want to see Joohyuk no longer in control, but laid bare, drunk on pleasure. On me.

"Who knew Wonder Boy was so good with his tongue?" I murmur.

He smirks. "I won a speech contest junior year."

"Such a waste of talent."

"Hey, guys." Sohee swings a third chair up to our table, glowing in her orange dress. "I got us a spot! I heard the typhoon was jamming up flights so I called the National Theater again and I was right! An acrobatic troop from Singapore had to cancel and now the theater's scrambling. Friday night when we get back to Seoul—it's ours! My aunt and uncle will be there and Jungwoo's already agreed to move the whole talent show and open it to the public—now I just need to get the Dragon's okay."

"Wow, Sohee." I pull free from Joohyuk to give myself space to breathe. So many good things are tumbling into my life. "I can't believe it. Yes, I can. The National Theater. You did it!"

She swings her hair over her shoulder. "They'll put posters in their box office windows and send an email to their list. They said we can even charge admissions."

"Seriously?" I scoot my chair forward. "Let's donate the proceeds to Jihyo's family. To all the families in her village impacted by the typhoon."

"I should have thought of it sooner." I hug him, then Sohee. "It'll be a small way to give back to her."

"And what about adding an auction?" Joohyuk says. "It'll raise more money. Then anyone can contribute, even if they can't be onstage."

"Sohee, you can put it together, I know you can. We could ask everyone to donate stuff. Even Kang—" I wrinkle the hem of our tablecloth. "Maybe he'd be willing to give us some paintings."

Sohee's hand moves to her ear, involuntarily searching for his earring. A small cloud passes over her face.

Then she leaps to her feet. "There's the Dragon. Suzy, come on."

The Dragon scoops soup onto her rice as Sohee explains. I shift my weight from foot to foot and at one point, the Dragon sets a finger on her nose and a thumb on her chin, listening like Eomma does.

"Alasseo," she says at last.

"We're on!" Sohee starts to drag me away.

I turn back cautiously. "Ye?"

Her hawk-eyed gaze pierces. "This is a fine thing you girls are doing."

Picking up her plate, she continues down the breakfast bar.

"She won't think it's so fine when I walk onstage," I murmur as Sohee and I head back to Joohyuk. "Especially if our costumes are as y as you say."

"By then, it will be too late," Sohee sings.

"My dad called?" I fight down a stab of panic. I still haven't spoken with him since the -photo call.

Jungwoo hands a second slip to Joohyuk, who frowns. "Rosie? I thought she didn't want to talk to me."

I resist the urge to tear both slips into confetti.

Aloud, I say, "Looks like we both have calls to make."

This resort has no fourth floor—the superstition of Korea is equivalent of unlucky thirteen because four sounds like death or misfortune. My room is on the fifth floor, which means it's really on the fourth, and I'm feeling the weight of all that unluckiness as I press my door open.

He's not interfering with the talent show. No. Freaking. Way.

Not even if I have to eat a plane ticket home.

I check email first, to see if Sihyeon's sent warning. She has, my faithful sister. Appa's trying to reach you. Not sure what about. They're speaking in Korean. Eomma's worried.

Appa picks up on the first ring.

"Hi, Suzy." I picture him on the other end, under his Phoenix cap. His voice has calmed an order of magnitude since the -photos call, but that doesn't mean bad news isn't coming. "I asked the hospital to move my flight up a few days. I'm flying out tonight will pick you up tomorrow afternoon, and we will fly out Sunday together."

It's better than threatening to fly me home, but not by much. He's come to supervise me in person for my last days.

"I won't be on campus until late Saturday." By the time he figures out I'm at the National Theater, as Sohee said, it will be too late.

"Oh, okay." Appa sounds disappointed. "I'll pick you up on campus Sunday morning. Keep your cell phone one, okay? I'll text you on Kakaotalk." I'd expected anger, but his voice is kind. Almost pleading.

Have I dodged a bullet? "Sounds good, Appa."

I hang up, but my hand stays on the phone. He's about to board a plane, and I'd forgotten to wish him safe travels. That family ritual, a pinch of salt over my shoulder, without which misfortune might ensue. My absentminded dad, dreaming his doctor dreams as he walks through life. He'll forget his luggage at the airport or walk into a wall without Eomma to keep him focused on where his feet are taking him.

"Safe travels," I whisper. I hope it counts.

A knock sounds, and I open the door to admit Joohyuk. He's slung his backpack on his shoulder, ready to go.

"She didn't pick up so I left a message. Everything okay?"

So we're both off the hook. I should embrace it. Chalk my paranoia up to that lifetime of waiting for the other shoe to drop.

His hand lingers on my waist and I rise to my toes to kiss him. "Everything's okay."

By the time we disembark our buses onto the white-sand shores of Heaven Lake, our last stop, word of the benefit concert has spread. Sulli and Krystal offer to invite the Korean officials they met as Presidential Scholars. More talent comes out of the woodwork, including an acapella group and Subin's Martin Luther King Jr. rendition, which Sohee adds to our growing performance list.

"Put me and the boys down for a seven-minute block," Dohyun winks, and refuses to say more. A warm breeze wraps its arms around us as the Gang of Five poses on the shoreline for another Take-Back-the-Trope photo: arms and legs raised for crane kicks, dragon fists doubled and cocked, teeth bared—Magical Martial Arts Gurus who have our entire bus roaring with laughter.

I laugh, too, and add their names to the list.

"You might have another calling as a talent scout." Joohyuk kisses my hair.

I smile. "Maybe we can be a lot of different things."

Sohee and I find Kang against a palm tree under low-hanging, sketching on a pad on his lap. White waves surge up to the sand to lap at his feet.

He flinches when he meets my eyes and his hand moves to cover his sketch.

"What do you want?" His tone is edged.

Sohee, clipboard in hand, bravely drops down beside him on the sand, unconcerned about her dress. I sit on her other side, letting her explain the auction, the goal to help the flooded village. Kang doesn't speak, but he doesn't tell us to leave him alone either.

"I bet your stuff would go for a lot," Sohee finishes. "And it's for a good cause."

Kang sets his pad on the sand. "I'm in need of a trim." He flicks a strand with his pencil. Glances at me, then at his sandals. "I might have a few paintings."

"Okay, let me know." Sohee's all business, a front for those deeper things she can't say or show. "I'm inviting all the local families, plus my aunt's art collectors. I'll make sure your work gets seen by the right person. If you do it, I won't let you down."

His eyes flicker with surprise. A small smile. "I've never doubted that."

Jihyo cries when I called her from Jungwoo's phone. "Are you sure?"

"Absolutely. Lots of people want to help. They just need to know how."

"My parents won't believe it. My mom is nursing my new sister now—I will wait to tell her so she doesn't drop her! Please thank everyone. For all my village."

"It's okay to call me Sooji. I like them both."

I search the crowds for Joohyuk, finally spotting him in his green T-shirt by the bus's luggage compartment. His back is to me, body bent at an odd angle. He holds his phone to his ear. His body is webbed with stress lines I haven't seen since he returned from Busan. His thumb digs at the insides of his fingers in a familiar, fidgety gesture.

I run over the sand toward him.

"Please, I can barely understand you," he's saying. "You're here? But how? Where?"

Joohyuk lowers his phone to his chest, shoulders tensed like rocks buckling at a fault line. With a jolt, I see his fingertips are red with blood—from digging those scars.

"She's here," he says, dazed. "She said she's been trying to reach me for days."

"What are you talking about?"

His eyes swing toward the road as a silver Porsche pulls onto the beach. A beautiful girl leaps from the back, stylishly cut black hair swinging at her shoulders. Her crumpled black dress speaks of hours of travel.

"Joohyuk!" Kicking off her sandals, she races over the sand toward us.

With a shock, I recognize her.

In person, she's even more beautiful than her photo: all clean lines with a perfect brow, a narrow nose, pink-tinted lips. Large-movie star eyes.

In my mind, I'd built her up into a huge presence. But in real life, she's narrow-shouldered, tiny and fragile. I'm horrified at the desperation she must be feeling, to have faced down her fear of flying and traveled so far.

"Joohyuk, we need to talk." She stops before him, with eyes only for him. At glitters the sapphire class ring on its chain. She's slightly out of breath, but her expression is composed, even lofty, like a princess—no wonder no one suspects how much she's buried deep inside.

But then her face crumbles like a stage curtain crashing down.

Flinging her arms around him, she presses her face to his, and bursts into tears.