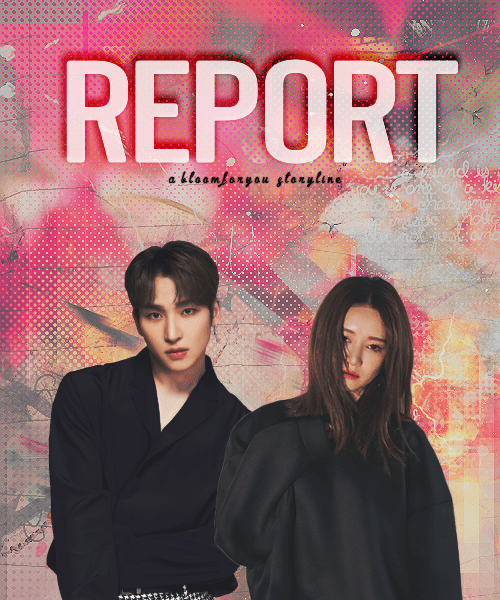 "I'm late. I'm late. I'm so in' hella late." Yeon muttered as she sped walk through the underground parking garage towards the elevators once she was dropped off by her sister, Seul, not that long ago.

"It's my first day on the job, and yet here I am already running late and . my life."

Yeon continued in slight frustration with her focus still on making to the elevators as fast as possible without paying attention to her surrounding as she was so focused on her ranting. This caused Yeon to be tunneled vision that she didn't notice or hear a car coming up just a row behind as the vehicle practically slammed its break immediately upon seeing her after she had passed the said row. The driver honked at her and although alert she was still in a flustered state, Yeon momentarily stopped in her tracks and stomped the front bumper of the car out of annoyance.

"Watch where you're going, Stupid Head!" She spat in disgust before jogging the rest of the way.

Sangyeon raised an eyebrow with a disapproving shake of his head.

"People these days have no self-awareness."

He looked left and right to make sure there was no other person in view so that he could drive on before Yeon had popped out of no where.

The elevator door opened and Yeon quickly smoothed out her clothing before exiting the lift and headed towards the receptionist's desk with a calm smile.

"Hello. I'm Yeon Lee and I'll be starting today." Yeon introduced herself while lifting her ID badge so the young woman could notice it. "I'm just not sure where to report to."

The receptionist, Haeyoon, smiled at her before returning to her computer screen to type in the information.

"May I see your badge again please?"

Yeon lifted the plastic item for Haeyoon to scan the barcode of her employee card before returning to her computer to look up the information. Yeon watched Haeyoon as she inputted the necessary information before printing out something and handing it over to Yeon.

"You're actually at NEOZ Group here and the one that you'll be reporting to will be with CREK.ERZ Group instead. " Haeyoon explained. "If you walk down that corridor, then you'll be greeted with a Chahee Park and she'll direct you to where you should be."

"Oh, okay. Thank you. I didn't realize there were more than one." Yeon thanked her with a sheepish smile.

"No worries and it's okay. For some reason a lot of people think NEOZ is the main entrance when there's actually four entrances in total."

"Ah, okay. Um, thank you once again, Ms. Park." Yeon thanked her after seeing her name placard to the side before heading to where she needed to go.

As she walked down the hallway, Yeon wondered how big this place that it had four entrances and two different companies within it. Anyways, when she finally made it to the other end and entered a different part of the complex she finally saw another receptionist desk. She walked up the area and spotted the placard with the name Chahee Park on it.

"Hello." Chahee greeted Yeon with a smile upon noticing her walk up. "How may I help you?"

"Hello. Um, a Haeyeoon Park from NEOZ Group gave me this." Yeon replied while handing over the piece of paper that she was given earlier.

"Alright, just give me one moment."

Chahee took the paper and read its content. She then inputted something into her computer and shot Yeon a patient smile before her attention went back onto the monitor before her. After a few more clicks, Chahee reached over to pull out a drawer, grabbed a file after sifting through it, and handed the manila folder towards Yeon with a smile.

"Alright, you're all set, Ms. Lee." Chahee stated before gesturing in the direction that she should head over to.

"If you walk along this way to my right and out through those doors and into another part of the building, then you'll be heading to the seventh floor and Mr. Lee will inform you about your position as I have already notified him of your arrival."

"Thank you so much, Ms. Park." Yeon thanked her with a grateful smile. "Have a great day."

Yeon shot her another friendly smile before heading on over to the way that Chahee had informed her about. After exiting the doors of the previous building she was in and making her way along the pathway to the next building over, Yeon calmly psyched herself up as she headed towards the elevators. She pressed the button for the seventh floor once she was inside and let out a deep breath as random thoughts crossed her mind.

"Kwangin better not have set me up with some workaholic boss or something because if he did, I'ma strangle him when this day's over. That depends if I even get to keep the job as I'm still hella late."

A sound dinged indicating she reached her designated floor and on the other side stood Sangyeon already waiting for her.

"Stupid Head." Sangyeon interjected with a smirk upon recognizing the female from earlier.

The smile upon Yeon's face diminished upon recalling that particular event that happened not too long ago. She groaned inwardly already knowing she just gave him a bad first impression of herself before she even officially started. Yeah, she was not getting this job at the end of the day.

Sangyeon led Yeon around the department as he introduced her to the other staff and informed her about the office procedures. Yeon also learned that she would be working directly under him and assumed she would be just another worker like the others she had just been introduced to until she was led to the desk just outside his office.

"Staring today, Ms. Lee, you'll be working as my secretary." Sangyeon explained as she unconsciously let out her confusion of what he had just said.

"My secretary." Sangyeon repeated as he gave her an analytical look. "Ms. Lee, were you not aware of the position you were hired for?"

Yeon debated if she should lie or not and went with the latter as to not add more to her already bad first impression.

"Unfortunately no, I was not, Mr. Lee. I was only told that I would be working at KC Corp and nothing more."

Yeon watched as Sangyeon turned to the side to let out a few controlled breaths before facing her with a weird smile.

"Well then, Ms. Lee, luckily for you, you were specifically and personally handpicked for this position due to a very high recommendation."

Yeon didn't question it as she did have a funny feeling about this whole thing as she only filled out an application and didn't even get an interview. All she knew was that she was told straightaway that she got the job a few days later after giving her application to Kwangjin about two weeks ago.

"Now, Ms. Lee," Sangyeon gestured at the large pile of manila folders about a half a foot or so tall on the desk she would be occupying, "I would like for you to go through all of these and sort them out accordingly as the previous secretary was unable to do her job accurately."

"Okay. Anything in particular I should be looking for when sorting them out?"

"Yes. Write a report based on the information within these folders of the cash flow transactions of CRE.KERZ Group along with its association to the groups within KP Corp. Please compare the transactions from last year to now and a monthly break down comparison of this year's transaction. Afterwards, present to me your finding when you're done with that."

"Hold all my calls for today. If any visitors, then please turn them away. I do not want to be disturb unless it's lunch time. Knock three times before entering."

Yeon mentally took note of it all with a nod indicating that she had acknowledged his words.

"Also, postpone today's and tomorrow's meetings and reschedule them at the earliest convenience."

Yeon nodded again for affirmation and was about to ask Sangyeon about the whole online software that kept all of the data that he had mentioned earlier, but her boss had already walked away and into his office with a soft slam behind him. She let out a sigh as she sat at her desk while staring at her computer screen.

"Crap. He didn't even tell me my login info."

"Thank you so much, Chanhee."

Yeon thanked her new co-worker as the male had spent at least an hour in helping her with the program and logging in which was basically her employee number as the username and the password was the last digits of her social security.

Chanhee smiled as he let Yeon back onto her computer as he lingered around her desk a little longer.

"Is there anything else you'll need help with?"

"I don't think so." Yeon answered while scanning all the contents on the monitor before remembering some things.

"Ah, could you help me out with a few things that Mr. Lee asked me to do?"

Chanhee answered her questions along with explaining how things work and how to operate it. He finally let her control the computer when she finally got the hang of it. Yeon opened up the e-mail page to send out the e-mails in regards of the rescheduling Sangyeon's meetings for today and tomorrow while also opening up a word document to work alongside her when she went over the stack of files before casting Chanhee a smile.

"Thank you once again. You're really super helpful."

"You're welcome and glad to be of a service."

Chanhee was about to walk back to his own area when he heard Yeon call for his name.

Yeon opened the first folder she saw and it had so many numbers on it. She showed it to Chanhee with a hopeful expression.

"How good are you with numbers and do you think you can explain a little more stuff to me about the transaction and KP Corp itself?"

Yeon was in the middle of writing the report after much help from Chanhee when her attention was called away from the computer monitor to someone loudly knocking at her desk to get her attention. Yeon thought it may have been Chanhee or another co-worker, but her expression remained the same when she glanced up to see a young woman standing there instead.

Please log in to read the full chapter
Like this story? Give it an Upvote!
Thank you!
← Foreword
Back to Top ↑
No comments yet
Back to Top ↑
Foreword
Promoted - Advertise