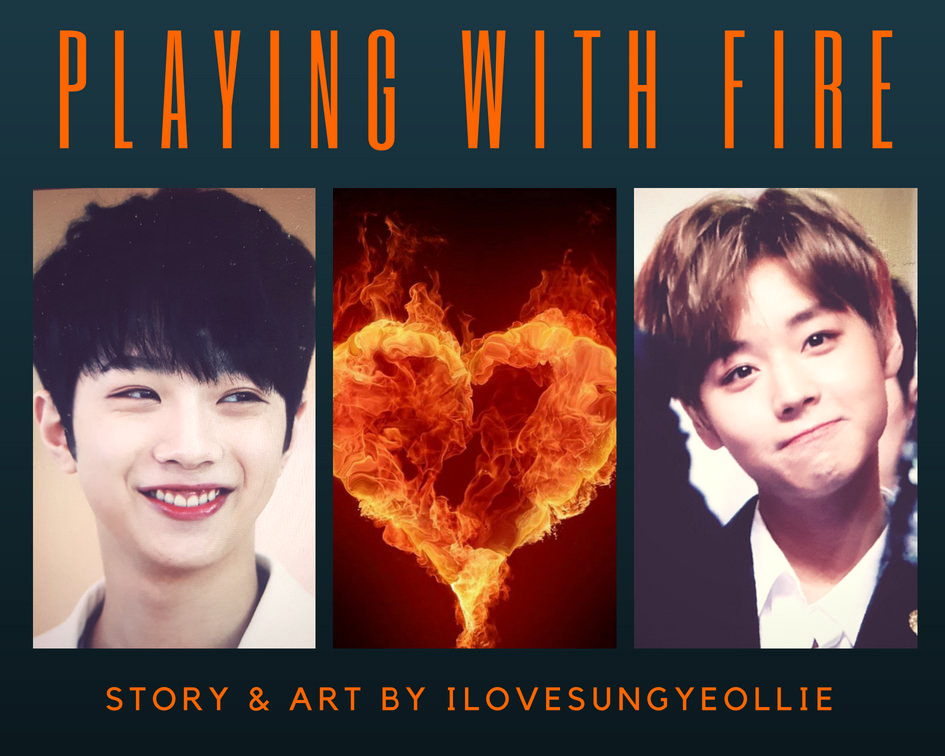 Jihoon walks out of his room and almost screams. He turns around quickly and storms back into his room.

Back in the safety of his room, Jihoon breathes deeply as he slides down the door and onto the floor. He whines and rest his forehead on his knees. With his eyes closed, the sight of Guanlin’s from two seconds ago, flashes before him. Jihoon knocks his head against the door to try and get rid of the image before he thinks too hard.

A few moments later a loud knock on his door causes Jihoon to flinch. He jumps up swiftly and hopes he doesn't look too flustered. With a thundering heart Jihoon opens the door to reveal an angel standing in front of him.

A tall stature, with long legs that go on for days, warm brown eyes and charming smile - Guanlin was an absolute masterpiece that had Jihoon swooning every single time he saw him. It's a wonder how Jihoon managed to survive as Guanlin's best friend, and now roommate, all these years.

Guanlin currently has a frown on his face as he looks at Jihoon.

"Are you okay hyung?"

"Were you banging your head against your door again?" Guanlin continues, with a raised eyebrow.

Jihoon's body decidedly doesn't want to cooperate as he heats up and splutters. "What, yeah, I mean no, how-"

Guanlin chuckles and reaches out to ruffle Jihoon's hair. "You're so cute."

Jihoon is further shocked and he thinks he is well on his way to a higher plane. With difficulty he manages a comeback. "I'm older than you."

Just like that Guanlin turns away, that heartstopping smile on his face as he giggles to himself. Jihoon is ready to faint into his door frame but decides he needs to be alive to continue marveling over this angel reincarnate.

It's a new day, a sunny one at that, and perfect for a casual stroll to soak up all the vitamin D. That is what Jihoon had in mind as he strode out of his room with a light purple t-shirt and comfortable jeans. He was, however, flagged down by his one and only roommate a.k.a his biggest crush ever.

Guanlin's head had snapped up the moment Jihoon's room door opened and when the elder walked passed his position at the dining table, he had called to him.

"Jihoonie-hyung." Guanlin had whined in the cutest fashion possible with the most pitiful puppy dog eyes that had Jihoon melting instantly.

"Yes, Guannie?" Jihoon answered in what he hoped was a normal voice as he resisted the strong urge to coo and pinch Guanlin's cheeks. It shouldn't be possible for a second year university student to be this adorable.

Guanlin pouts as he looks up at Jihoon. "I need your help hyung. I have an exam tomorrow and I need to practice."

Thinking it was just normal concept and definition memorisation, Jihoon agrees readily. It was definitely not because Jihoon was whipped for Guanlin. Not at all.

Guanlin brightens up immediately and Jihoon thinks, this is why. Jihoon would do anything to keep that beautiful smile on Guanlin's face.

"Well the thing is hyung, part of my test tomorrow is doing palpation." When Ji