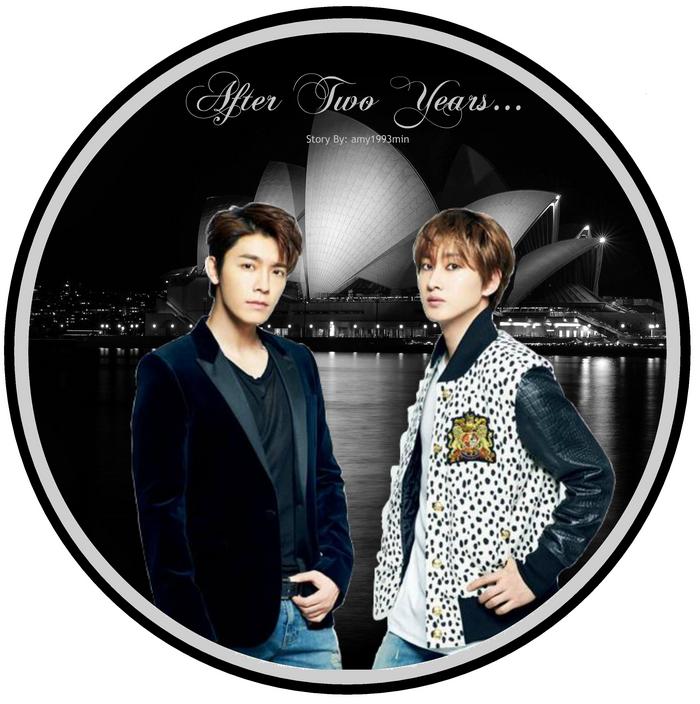 (A/N: Please don't expect a good story because my rusty brain is being troublesome lately)

His feet taps, impatiently, against the marble tiled floor as he glances at his wrist watch before drifting his eyes back toward the small rectangular screen that shows how the elevator he had been waiting for has been staying still on floor 34 for last three minutes now.

What’s the hold up for, he screams mentally before a small sigh leaves his plush lips as the number of floor starts dropping, finally. He, once more, steps up to push at the down arrow button to remind the elevator he was waiting for it on the ground floor. He was still having a hard time believing how such a grand Hotel could have only one elevator… of course he doesn’t counts the fact that there were three more elevators fixed on other corners of humungous lobby, he was standing at.

He nearly curses when he notices how the elevator comes to a rest on 27th floor. He had half a mind to turn and walked toward the elevator on the right corner of the Hotel before his gaze fall on at least seven to eight people crowded before it, so, he opts to wait for the one he was already standing in front of since he was solo here.

Hyukjae mumbles something about bad luck under his breath before he turns to do a recheck of his outfit, in the meanwhile. He dusts off imaginary specks of dust from his black and white suit, adjusting the black tie before his hand unconsciously pats the side of his brownish blonde hairs. An approving smirk climbs on his full pink lips.

The elevator makes three more long lasting stops on 21st,13th and 6th floor before it announces its arrival on the ground floor and he is glad to find only a couple of people in it- who exit as soon as the door of elevator glides open. He enters with an exhausted sigh and happily reaches for the button to close the elevator door but is brought to a halt by a loud call of ‘Hey! Hold the lift!’ and immediately he pushes the button that commands the elevator to keep its doors open.

Swiftly, he moves backward in order to make some space for the guy, who called for the halt just then.

“Thanks man! I really-” The man, who enters the elevator comes to a skidding stop, as he looks at Hyukjae with his eyes wide and surprised fill, like he could not have imagined meeting him in his life ever again. Hyukjae too stare at the guy and something akin to a pang seizes his heart. The other gaps like a fish out of water and suddenly Hyukjae has an urge to chuckle at the accurate resemblances but, thankfully, the elevator waiting long enough tries to close its door only to ‘ding’ loudly when it found its way blocked by a huge muscular body. “Oh, sorry.” The guy says to the elevator making Hyukjae to bite on his lips because laughing at him now would only bring awkwardness afterwards.

Silently, Hyukjae moves to stand in a corner, which naturally makes the newcomer to occupy the other corner. They both stand rigid like statue until the elevator takes the initiative and closes with a hiss… leaving a suffocating silence inside it. Then the other guy moves to push at the button 40, Hyukjae raises his eye brow in a bit of surprise because he wanted to go to same floor… the only floor of the Hotel that serves as a restaurant, open for outsiders to utilize as they please.

Hyukjae watches the small digital screen showing the numbers climbing this time around and he desperately wishes for it to pick up its speed. Quite discretely, Hyukjae looks from the corner of his eye and takes in the navy blue velvet suit his unappreciated company has adorn. The cuts of the suit seemed to be made for his wide shoulders built. The pink tie matches the color of his thin lips, which he was currently biting upon-

Hyukjae stops his train of thoughts as horror fills every corner of his mind the instant he realizes what exactly he had been thinking about. Two years, it had been two damn years and Hyukjae still felt affected by Donghae’s wide shoulders, sharp jawline and lips that seemed to be made for kissing… this was wrong… this was so wrong.

The awkwardness was practically oozing out of them and nobody could blame them because it was two years ago that they had broken everything off, saying bitter good byes… or, come to think of it, Hyukjae doubted they even said the actually ‘Good bye’. Things had not gone as smoothly as Hyukjae would have liked back then.

But now that Donghae, as brunet as he ever was, stands just a few feet away from him, Hyukjae longed to ask him how was he? Did he complete his mandatory army service well? Did he eat well? Did he ever miss him…?

But he didn’t had any right to ask any of that, Hyukjae knows thus he keeps his lips seal as the elevator screen shows how they have already reached 38th floor, without interruption from any other elevator seeker.

“Are you getting off at floor 40, as well?” Suddenly a deep husky voice sounds from beside Hyukjae, making him jolt in surprise since he had not been expecting Donghae to ever say a word to him.

“Y-yes…” Hyukjae squeaks, mentally face-palming his embarrassing self but, by the grace of all high powers out there, the elevator makes a stop at floor 40 and with yet another loud ‘ding’ it opens into a carpeted restaurant of Hotel. Hyukjae’s eyes swept over the round tables scattered around the humungous hall, everything covered and decorated in the theme of shiny brown and pale gold with nearly all the walls around this floor were made of floor length tinted glass windows.

Donghae makes a gesture of ‘after you’ like a gentleman but Hyukjae feels annoyed at other’s lack of words… he could have talked a bit more, they had shared quite a history back in good days. Huffing under his breath, Hyukjae took long strides to leave the elevator behind and look around in search for his dinner company tonight. Thankfully, his brother Jungsu is sitting just a couple of tables away, merrily waving at him. A wide gummy smile takes over Hyukjae’s earlier grumpy looking face as he carefully tries to wind his way between the already full tables. But before he can run into Jungsu’s open arms a loud, cheerful and rather familiar voice catches Hyukjae’s attention and he swirls around to witness Donghae warmly embracing and politely pecking on his good friend Kim Heechul’s cheek.

“Hyukjae?” Jungsu’s concern filled voice makes the said guy to turn around with his award winning smile and proceeds with the hug he had intended to deliver his elder brother. “Is everything alright?”

“Fine,” Hyukjae assures with a timid grin as he takes the seat his brother points at, which regrettably provides him with the best view of the table for two, Donghae and Heechul occupied at that moment and the blonde man is unfortunate enough to spectate the way the two men are leaning toward each other.

Jungsu’s small inquiring prove themselves to be distracting only when Hyukjae tries his best to avoid looking at Donghae’s table and keep answering his brother’s harmless questions… even when they turn a little more personal and deeper with Jungsu seeming keen to learn about Hyukjae’s current love life, which he is humiliated to admit it next to non-existent.

“Working is good but try going out a bit more,” Jungsu advise gently while he cuts his meat and reaches out for the sauce.

Hyukjae nods unenthusiastically before his eyes moves on their own as they once more drift toward Donghae only to flush dark red when he is caught in the act but luckily Donghae seemed as flustered to be caught staring thus he looks away immediately. In his rattled state, Hyukjae accidently knocks over his glass of wine which drips down on his black pants. A waiter is quick to move forward with several towels, he keeps his voice low as he assures Hyukjae that it was no problem at all, mindful not to let other occupants to find out about their customer’s mishap. Hyukjae feels a sense of gratitude rising toward the nice waiter, mentally making a note to ask for his name and drop several good comments about him to the manager.

Even though his pants are black, making no wine strain to seem visible but Hyukjae- being so embarrassed- excuses him for a men room break. He splashes cold water on his face to make the deep dark blush to reduce to his natural pink tint before he stares at his dripping face that produces strange shadows in the dim lightning of the washroom. Sighing loudly in the otherwise still silent restroom, Hyukjae grabbed a paper towel to take away the few water drops on his pale face before his eyes moved toward the water droplets on the white ceramic of basin as his mind started playing clips of happy faces of a certain someone.

Hyukjae was so immerse in his own thoughts that his mind didn’t even register the door of restroom opening and closing lightly. It was only when someone came to stand on his neighboring washbasin that he looked up to see dark brown eyes staring at him through the long mirror on the wall. Startled, Hyukjae turned his neck to find Donghae’s medium size figure standing beside him while diligently rubbing the liquid soap to make thick white foam layer on his hands.

Hyukjae didn’t realize he had been staring for more than a couple of minutes until Donghae said, voice filled with mischief, “Never saw a man more handsome than me, did you?”

“Someone needs to get their eye sight checked,” Hyukjae taunts as he moves to throw away the used paper towel in the tall bin. Then he proceeds toward the door to make a run for his life but stops when an iron grip on his wrist jerks him toward the offender. Finding his back pressed against the cold tiled wall of Hotel’s restroom with Donghae’s handsome face only a few inches apart was not what Hyukjae

Please Subscribe to read the full chapter
Like this story? Give it an Upvote!
Thank you!
← Foreword
Back to Top ↑
No comments yet
Back to Top ↑
Foreword
Promoted - Advertise