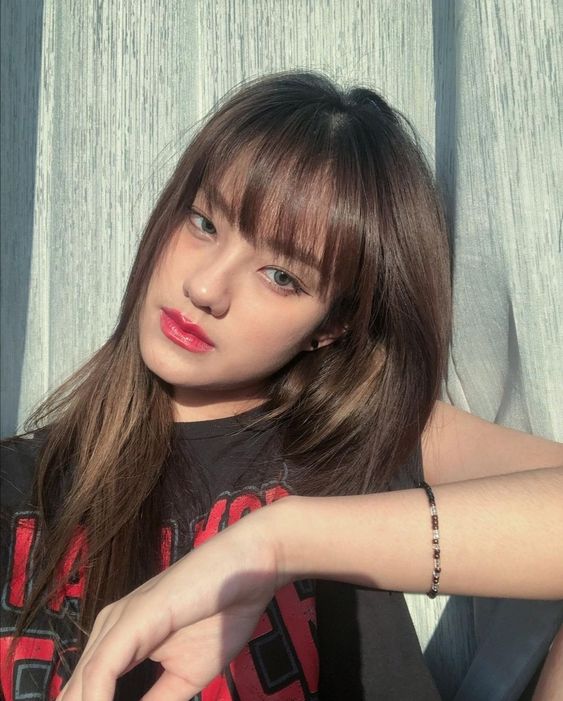 song / this was her nickname that she was born with, so the name that she goes by
doolie / although it's a character's name, sometimes her fans call her this since her name in thai means two, and in korean it's dul

thai / native / this is her first language

english / fluent / she went to a private international academy from a young age, so english quickly became a part of her every day
korean / conversational / considering she hasn't been in korea for too long, her pronunciation could use some help. however she says she's getting better every day

song is a girl with perpetual bangs. whether they're paired with side pieces like hime bangs, she will always have bangs.
she also prefers to keep her hair color on the darker side, for the sake of her scalp and because it's what she thinks looks best. she also wears glasses, but because of her idol training she has began wearing contacts every day, only wearing glasses at the dorms.
song has also been collecting ear piercings because she loves the look of being able to decorate her ears how she wishes

because of her upbringing and her past idol group status, song has developed most of her personality through these things. her father taught her to be everything she is, from her lenience in being a conformist during pressing times as well as her hard working nature. when song wants something, if she puts her mind to it she won't stop until she gets it. some may consider her a perfectionist, however it's just part of her journey and her habits so that she can achieve what she wants.
while song is a rather quiet and reserved girl, she also has her extroverted moments when she's around people she's comfortable with, so often this can come out when they are on camera or in front of their fans. this is where her 'sassiness' and sarcasm come out. she always has a comeback for anything that's thrown her way, which has also furthered her korean skills. before she was relatively good at korean she would still try, even though they would be simple and often silly.
on top of these, song is someone who does what she wants, combining with her 'i can do anything if i can set my mind to it' mindset. this gives her enough confidence to push her further. usually the things that she wants to do whether it's impulsive or not typically has to do with her hobbies and work. when she wants to learn a new challenging dance, she will do it if it keeps her up all night. when she was learning korean she would bring her work books with her everywhere and do them between schedules and in the car. she also wants to buy a japanese work book so that she can learn japanese.
whenever song is sad, though, she's the type to keep it in and not let it show. however if someone knows her well enough, they'll know that if she's unusually quiet even though she's still smiling, something could be up. her mannerisms will also turn to her being a bit more physically clingy, her skinship becoming more frequent. if she's confronted during this time about her emotions though, it's likely they'll all spill out. she hates crying in front of others, but once she starts it won't stop until she is calm enough to actually sit and regulate her emotions.

song was born in the south of thailand. hat yai city to be exact. when she was a couple of years old, her parents divorced and her dad raised her from there. both of her parents remarried within two years and gave her a half sibling on each side.
from a young age song found an enjoyment in dancing and singing, so once she was old enough and had her father's permission she joined a dance group so that she could begin doing something that she was passionate about. her father was fully supportive of her decision and even encouraged her to do what she loved.
through her dance academy, song auditioned for a girl group named amoranth and made it in the group. unfortunately the group disbanded within a couple of years, crushing song, however her determination was enough for her to keep working for her dream. however while she was in amoranth, one of her group members introduced her to kpop where she fell in love with the girl group rose. initially she supported moon through and through, but quickly started to look up to all of the members. her interest in the group was the reason for her auditioning for dal media.

- her favorite color is black and her favorite food is sushi
- she loves cats and would like to have one of her own one day
- one of her biggest fears is water, so therefore flying in airplanes if it's over water also ties in.
- she loves watching movies and tv shows, often updating her fans on what she's watched or has been watching.
- her name song in thai means two
- she has never had a boyfriend or a girlfriend
- she really loves old american rock bands such as motley crue, kiss, guns n roses and aerosmith. she has a lot of t-shirts having to do with them. they also inspired her to begin to learn the guitar at a young age.
- kuromi is her favorite character from any franchise
- she really likes watching anime, her favorites being naruto and bleach
- one of her favorite things to do is learn boy group dances, especially bts and shinee
- song has a habit of making weird faces when conversing with people if the conversation is entertaining her. she also does faces for her fans. example: 1, 2, 3

closest in the group / morohoshi asuka / 21 / member of eclipse / sociable, efficient, fun loving, down to earth / when song met asuka she immediately felt drawn to the younger girl because she was half south east asian. now the two are like your typical black cat and golden retriever friendship
father / beam hiranchai / 55 / dentist / hard working, loving, supportive, strict / since beam was the one who mainly raised song, she views him as her everything and couldn't imagine her life without him. she's constantly sending him gifts, especially korean snacks.
best friend / mali chaichana / 25 / former idol, current model / Personality / the two met in the girl group amoranth, as mali was the one who introduced song to kpop. the two have been best friends ever since.

Trainee years. 1 year (beginning of 2019 she began at dal media)

Trainee Life.
when song moved to korea, all she had to do with the korean language was the beginning work book she had bought a few days before her departure. when she began training and receiving korean lessons, she had a rough time keeping up because she understood little to no korean and most of the instruction had to be given in english. because of this she considered quitting multiple times, but with the help of the other trainees and her parents back home, they talked her through everything and encouraged her to continue. luckily she picked up on korean rather fast since she was immersed in the language and she was able to begin to enjoy herself.
while the training in thailand was nothing compared to the korean training, it wasn't as hard for her as it could have been for others.

2017 / song was in a thai girl group for about a year until disbandment called amoranth. their popularity in thailand wasn't immense, but they did have some fans.

their meeting was simply a case of being in the right place at the right time. they met through mutual friends at a birthday party. immediately it was like love at first sight for song, and although she's not the type to introduce herself first, she couldn't help but say something to him, since she knew she would regret it if she didn't.
after that she was always the one to initiate their hangouts, keeping it simply as friends, even inviting some of the guys from her group along so seungjoo didn't get the wrong idea, however behind her friendship guise she was always trying to make herself appealing to him.

Status. she just has a huge crush on him

- since he's always in the studio making music for himself and other artists, song loves tagging along and seeing if she can help
- as a 'friendship' gift, song got them matching silver chain bracelets
- song often brings juyeon to her hangouts with seungjoo
- song always jokes that she wants him to write her solo debut 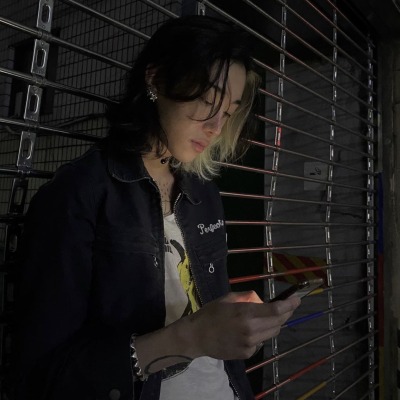 Comments/questions. i will try and get a male character turned in soon!

Suggestions.
- weekly idol
- their own reality show
- song being all nervous and shy around yuna