presenting to you our current event! this is a special immersive event that that will allow typists to explore their muse's strengths and intentions in the midst of the city's chaos. weekly news articles will be released showcasing the developments of the incidents occurring in new orleans and the challenges the residents will face. it's not too late, join us now to experience the fun! 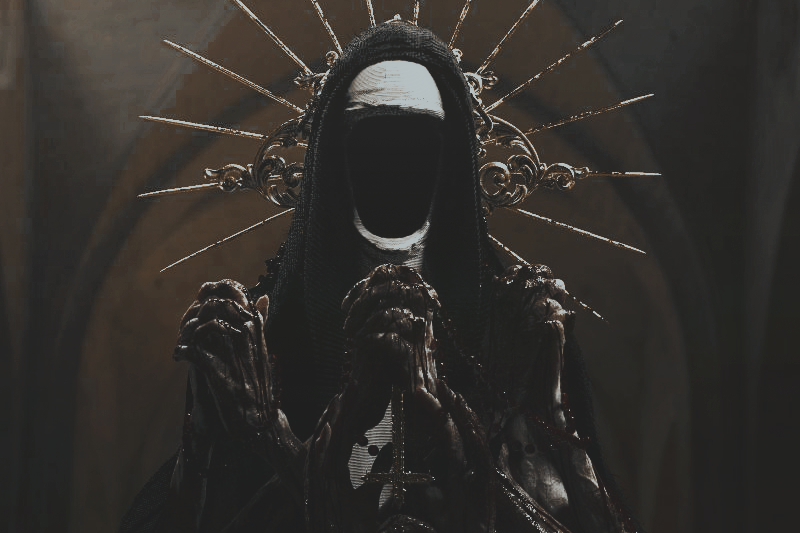 event backstory: Most of the original human settlers of New Orleans were unruly explorers, fur trappers, and traders. The governor believed to tame the disorderly men, they needed proper wives and so they asked the French king to send a consignment of women for the settlers of the new colony. In 1728, around three hundred women arrived in the New World with caskets containing their belongings. The Ursuline Convent took charge of the women; they were taken in by the human nuns until they were married off to men of the colony.

When the nuns met the young women, they noticed how sickly and gaunt they were. Even more strange, they were told the caskets they came with had to be stored away until women were married.

Not long after the arrival of the young women, there was an increase in mysterious assaults and disappearances. Legend has it that the young women didn’t come alone: they had been compelled and brought vampires with them. Most of the vampires were the newly turned or commoners; they were poor— unable to purchase daylight rings and didn’t have many relations with powerful witches to help them survive. The vampires came to the New World for a chance at a new life without fear of being chased away from resources by more established vampires and other supernatural creatures that resided in larger European cities. However, even in the colonies, luck was not on their side. A few found friends amongst other vampires living in the city, but many others were killed by the ancestors of the Clan de Elysee Witches and Eclipse Pack Werewolves. Most of the vampires were forced to hunt at night and return to the caskets in the convent during sunrise.

Upon learning of the beasts residing in the convent, the nuns also acted. Refusing to involve other creatures they believed to be satanic, they dealt with the matter privately and silently. One day, as the sun beamed in through the windows, the nuns used protection chalk to draw circles around all the remaining caskets, trapping the vampires and rendering them powerless in the attic of the convent. The coffins were nailed shut. The windows, though allowing in plenty of light, were also nailed shut to prevent the chalk from fading with interference from the rain. No one but the highest-ranking members of the nunnery were allowed in the attic and they could only go to freshen up the chalk lines during the day.

Over time, the Casket Girls came to be regarded as the Founding Matriarchs of New Orleans, and the vampires they brought with them became just another story.

event Description: The Darkness knows what secrets lie within New Orleans and once more it sets the stage to ruin the supernaturals’ safe haven.

This time, it utilizes the pixies it has captured, crafting a twisted conspiracy. A possessed blossom pixie to recreate a rare, ancient plant. A fauna pixie to nurse a breed of supernatural parasitic worms that lays its eggs on the leaves. A guardian pixie to deliver the tea leaves to the nuns in the convent. And a sky pixie to create a storm strong enough to break the windows, erase the chalk lines, and free the long-imprisoned vampires. When the nuns consumed the tea, they became infected, turning them into zombies. And when the escaped vampires broke out of their restraints, ravenous, they first fed on the nuns, allowing the parasites to enter their bodies and they too were turned.

The first sign of trouble was the disappearance of all the nuns. Then, the increase in assaults at night. Lastly, there were reports of a mysterious disease spreading amongst a population.

throughout this event, we provide ic news articles to report the city's incidents, citizens' reactions, and event progression. 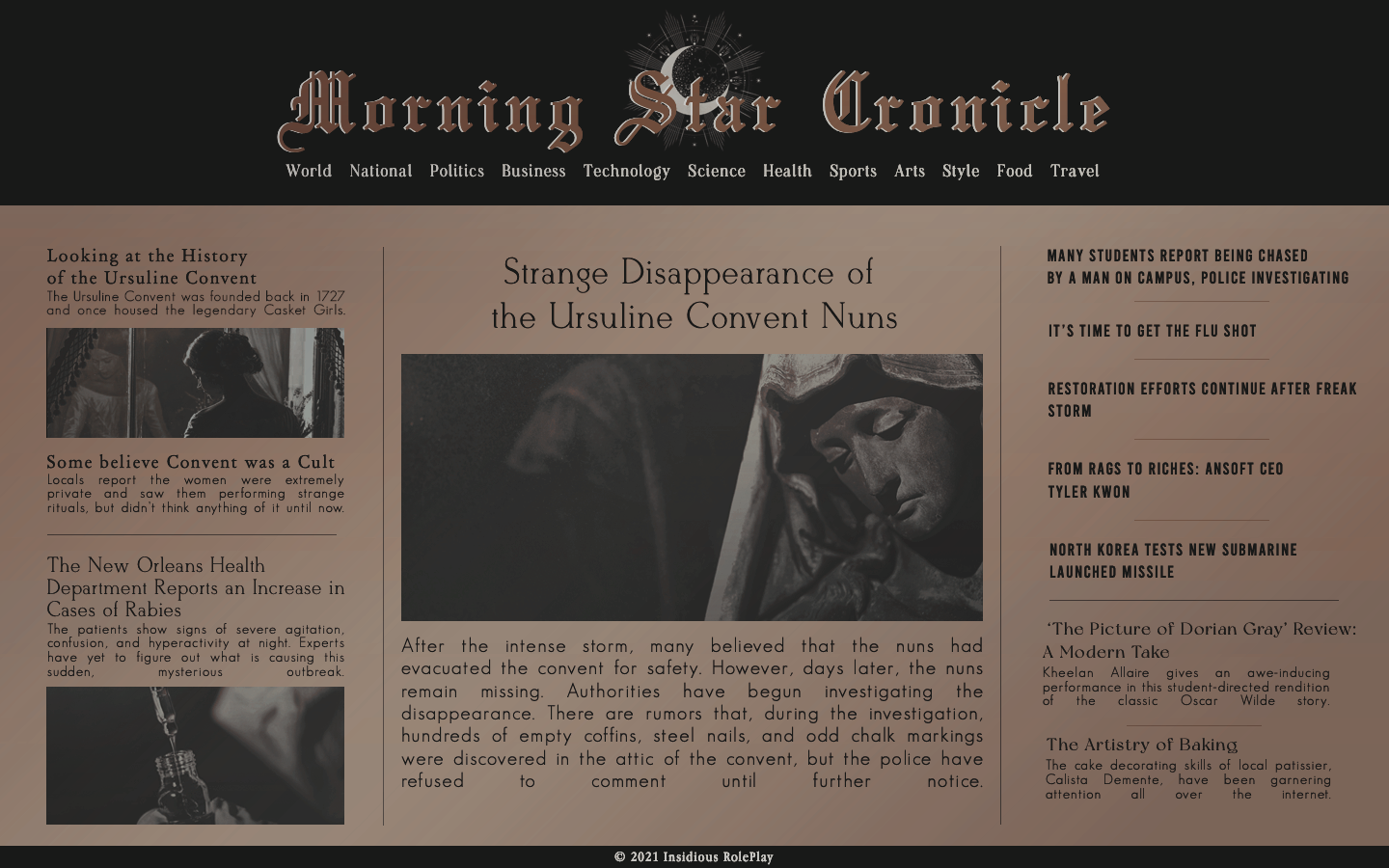 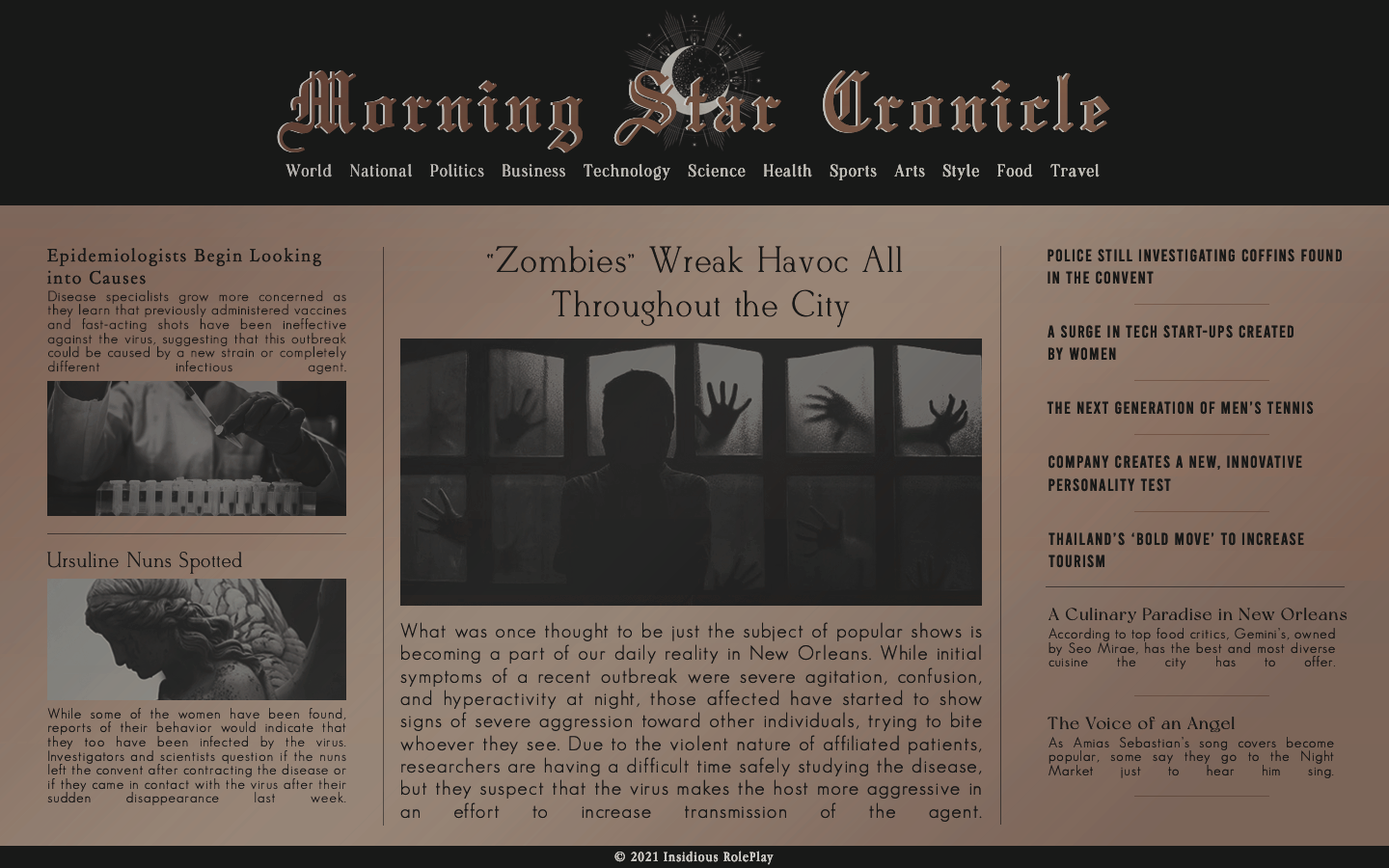