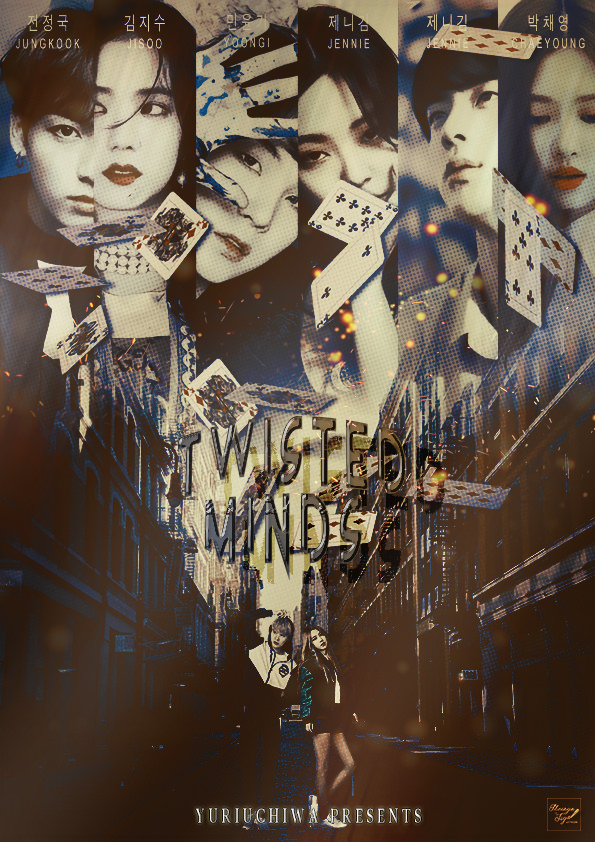 A world ruled by “The Ark” is a world of money, violence, alliance and conspiracy.

The Ark is a criminal organization that groups several noble mafia families whom rivalry and greediness never end, especially for the Kim and Min families.

When Kim Jae Kyung’s daughter and Park Won Sang’s son, Jennie and Jin arranged wedding seems like a threat to Min Dong Seok. His son, Min Yoongi is setting one of his twisted plans in order to make the cards stack in his favor...

As Kim Jennie is facing both the wicked Yoongi and her past lover Taehyung;

Doctor Jin made the acquaintance of Jisoo, a woman who carry with her a miserable fate;

Jin’s little sister, Park Chaeyoung is dealing with her own torments of her past;

On the other hand, the commander Nam Gil Kang and his team are still tracking  down every actions of The Ark. Min Yoongi (25): Adoptive son of the Min family and its only heir. Genius and cold hearted, he is in charge of his father’s shady works with the Ark. So he rarely shows up in the high society events and usually stays in the dark. His only aim is to find his real little sister whom he got separated with at a young age, His adopted father promised to help him find her as long as he stays loyal to him. He’s somehow only close to Jung kook whom he ask help in his works from time to time.

“Things get wicked when Yoongi’s twisted mind is willing to use Mr. Kim’s daughter, Jennie to achieve his plans...” Kim Jennie (23): The only daughter of the Kim powerful family that is part of a mafia gang, the Ark. Like her mother, she’s passionate by Modern Dance. Back in high school days, she and officer Taehyung were in a serious relation but part away after her father learned about them! Since then, Jennie decided to accept her fate and the family business that she always unwanted...she’ll soon get engaged to Jin even thought she still in love with Taehyung, the one that broke her heart!

“Min Yoongi came and turned everything goes upside down for Jennie...however she isn’t willing to let him triumph so easily...” Park Jin (31): He’s a skilled and young neurologist who seems to be really quiet and reserved from the outside, but a caring brother and the exampled son, in other words he is the perfect man. His mother passing away at a young age affected him deeply. He has a huge respect to his father and accepted to get engaged to Jennie for him.

“After meeting Jisoo; Jin is slowly learning to open up and express himself... learning to understand people not by his logic but by feeling them with his soul...” Lee Jisoo (26): A very beautiful young woman with such a pure heart but a heartbreaking story. Raised in a poor family, she was forced to quit studies and get into marriage by her father to a respectful and rich advocate for money. Jisoo and her little brother Dareum were always beaten by their father in the past which caused the paraplegia of Dareum. And now, it’s her maniac husband who abuses and threats her by using her brother’s handicap.

“After meeting Jin; Jisoo somehow started to heal her scars and broken soul by learning to value herself and seeking love again...not by hiding and faking the truth...” Jeon Jung kook (22): He’s a simple and brave boy who tries to lives his life peacefully. After getting involved into a fight he was expelled from the police academy but the real reason was that he’s the son of an ex criminal, so in order to support his sick and lonely mother he started working at many part jobs including the auto repair shop of Yoongi whom he renders particular services from time to time... Park Chaeyoung (19): The lovely and fragile little sister of Jin; She had just turned 18 years old when a horrifying accident shook her life: She was planning to continue her studies at “Juilliard School” for music after graduation; but cancelled her plans after her boyfriend Hoseok killed himself that summer. She went aboard for about 6mouths to get psychological treatment. One year later and even if it’s still very hard for her, she is trying to live on with it thanks to the help she’s receiving from her family and closest friend Jimin...

“Chaeyoung became like a caged bird, safe and sad...always sheltered from secrets and dangers of the outside and not healed from the scars and memories of the inside...yet..." Han Taehyung (24): An ambitious and determined police officer in the commander Nam’s special team: the “Team Nam”. He was once in a serious relationship with Jennie but they spilt away after her father got involved. His objective is to get down the entire “mafia system” that corrupts the country: The Ark, which include the Kim family. But with Jennie involved...will it be easy to him? Manoban Lisa (22): She is the new recruit of “Team Nam”. The commander Nam seems to recognize her skills as she ranked first at her graduation from the police academy. Jung kook was in her class before getting expelled. Nam Joon (27): Known by the majority as RM, he is hardworking police officer and the leader of “Team Nam”. He is also the son of the commander Nam. With his teammate Taehyung and new comer Lisa, they will be tracking the outlaw organization: The Ark. Kang Jimin (20): Son of a known and wealthy family in the country that is also a part of The Ark. He is the best friend of Chaeyoung who seem to always be by her side and care about her. Jung Hoseok (died at 18): Known for being a nice and discreet guy, he was Chaeyoung boyfriend that killed himself during the summer after his graduation. The case was closed after the police declared that he died from a drug overdose.

Official Trailer : (made by me)

How did I wrote this Story?

Everything happened when the talented SheirynFiya Challenged herself for a "30 days graphic challange"! Im really sooooo grateful to her because she designed such AMAZING posters that are Free for adoption! She kindly accepted to change the title for me and this is how Twisted Minds is Born!

So Please go check it down here:

**Check out my other stories**: Next Chapter →
Author's Thoughts
"Twisted Minds" Official Trailer is Here!!! Come and check it ^_^
Read More →
Back to Top ↑
No comments yet
Back to Top ↑
Foreword
Promoted - Advertise