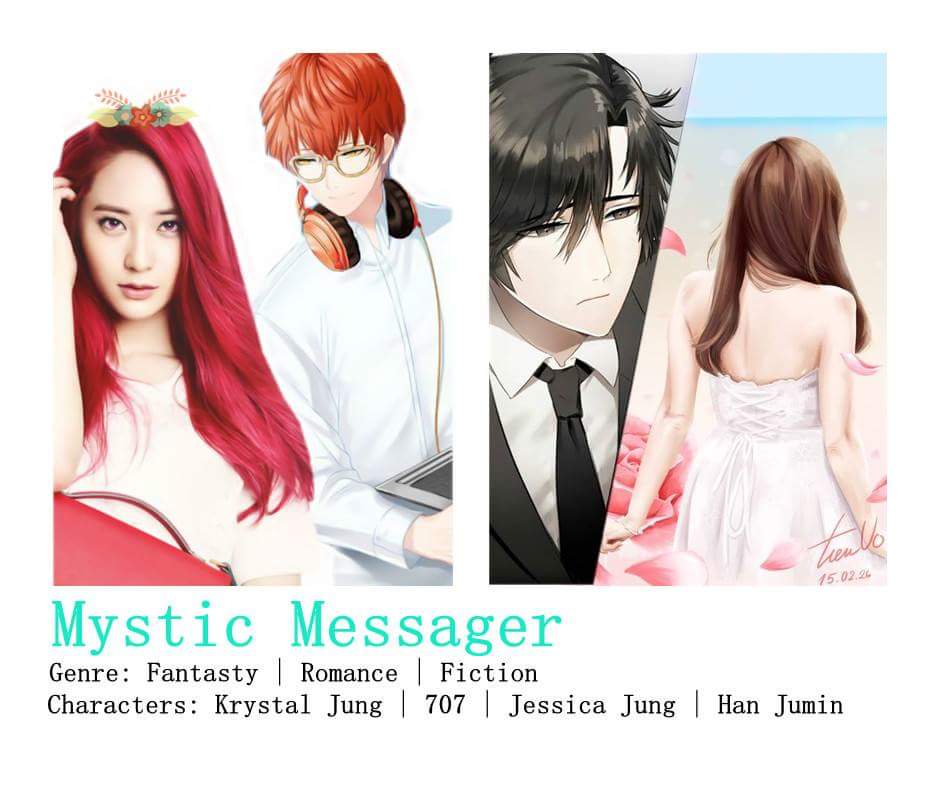 Krystal Jung is a kind of quiet girl who rarely enjoy the social life with the other friends. She is a college student at English Department which her subject is communication, yet she is poor at communicating to the others.

Girls at her ages, they are having boyfriends and many ex-lovers; meanwhile, she is a forever alone girl for waiting a right man in front of her.

However, her standard is too high, plus she didn't know how to grab love opportunities and she is lone. Krystal used to dream about having an IT boyfriend to help her about the programming things but she never got once, even an IT friend.

When she saw her friend played Mystic Messager Game which leads the players dating with robots in game, Krystal decided to play it. The First video showed up, she was interested in 707 at the first sight because he is a hacker, similar to the IT boyfriend she wanted too. However, the deep story which 707 was in, needed to spend 80 hourglasses to unlock it; thus, she decided to play normal story to save hourglasses. She passed Jaehee's route who is the only one girl there and the reason she was with her because Jaehee had the same character like her best friend, Kim Yura. Therefore, she got along.

During the game, she found out that Jumin was more attractive than 707, so she suddenly liked him more and planned to go to his route after unlocking the deep story.

She spent 11 days to complete normal story and went to the deep story.

Krystal's first route was 707, not Jumin's route like she expected. She still wanted both characters and the last man should be the man she loved the most. This is why, she kept Jumin's route at the last. Unfortunately, she picked up a wrong choice. None of the player chose 707 route first because his route was the main causal story in the game, and it was like horror. When Krystal first went to 707 route, she got many things difficult. More surprisingly, the deep story she was in, wasn't a simple game like the normal story and she was dragged to the game and meet the real action there.

It was too late for her regret and she didn't know where to go. Plot of the story was really shock and almost kill herself. Krystal realized that if she got the bad ending in the story, seven must be dead. She didn't want anyone die because of her even he was just a fictional character in game. That why, she decided to be with him till the end of the game. She got a good ending but she wasn't happy because the good ending wasn't a happy ending she wanted.

She fell for 707 deeply and no word to speak after spending dying time with him for 11 days. Her life backed to be normal when the route game finished but the story of seven hadn't ended yet.

All she wanted is to see seven happy and she was by his side.. However, Krystal couldn't continue the game because her hourglasses out of stock. She couldn't even buy it because her credit card was blocked by her parents.

Then, she only had to go back to the beginning of the game and picked up Jumin route in order save hourglasses again. She changed her account to her sister's name and changed to put her sister's photo instead since she didn't want to face seven when she was belong to the other man.

As a result, when she returned to the deep story again, her appearance was changing to her sister and she used the indentify of Jessica Jung to play along with Han Jumin.

Sad thing happened, Jumin's reflection got her complicated. She had to be honest with him, but seeing 707 again and he wasn't mean to her, she felt very sad.

She knows everything about him but she couldn't go to confort him. If she got Jumin's bad ending, she would be locked up at his house forever, so this is the result why she couldn't betray him...

I got this idea when I played Mystic Messager Game. I fell in love to the character 707 at the first sight so I decided to play normal story and save the hourglasses to pass the deep story. During the time I was playing normal story, I realized that I liked Jumin Han, a mean both of Kang Jaehee. After that, I tried my best to save hourglasses to unlock deep story and I really did it. I unlocked deep story but I suddenly felt confused because I didn't know who I should pick up between 707 and Jumin because I liked them both. At that time, I liked Jumin more, so I decided to go to 707's route since I wanted Jumin's route to be the last. However, I didn't like I expect. I picked up a wrong choice to go to 707's route first and made me upset because of his story. I started falling for him more and more, forgetting about Jumin. 707 route was completed but the good ending I got, wasn't a happy ending and made me sad all day. I felt like losing an important thing in my life. However, the story of 707 hadn't ended yet, because I had to unlock two secret ending of 707 but I didn't have enough hourglasses. So I came back, and played Jumin's route in order to save hourglasses to unlock 707's story which is the main story of the game. Yet, I found out that I fell for Jumin again -_-;;; Pfffttt.... but just, Jumin can't compare to 707...

And I suddenly got an ideas of this fanfic about them and chose Jung Sisters to be the main actresses because when I was at 707's route, I named my account, Krystal Jung and when I went to Jumin's route, I changed my account to Jung Sooyeon.